The Big Road Trip, Part 15: An Accident in Texas


We left the congested Arlington, TX, area and headed east towards downtown Dallas.  We wanted to see the touristy stuff surrounding the assassination of President Kennedy, but the highways in the Central Dallas area were under a major construction project and our GPS just couldn't handle the mixing bowl of road work.  So we just headed on out of town on Interstate 30, then working our way over to I-20 East, we continued our journey.

We were near the little town of Lindale on I-20, coasting over a rise, when traffic slowed ahead of us.  I slowed down and moved from the right lane into the left, because there was a tractor-trailer in the right lane.  There was a Subaru wagon in the right lane that continued on at full speed, at least 70 mph, never slowing down as it slammed into the back of the 18-wheeler.  It was a tremendous impact, sending pieces of the car in all directions.

I drifted to a stop, halfway on the left shoulder, and stared, trying to register what had happened.  Traffic behind us stopped, as well.  I asked my daughter, Melody, if she saw what just happened, and she said no, that she was looking at some pictures on my phone.  I asked her to take a picture of the vehicles, just in case it might be important later.  I realized no one was doing anything, and there was no life from either vehicle.  I decided to move just ahead of the truck and park on the right shoulder and see if there was anything we could do. 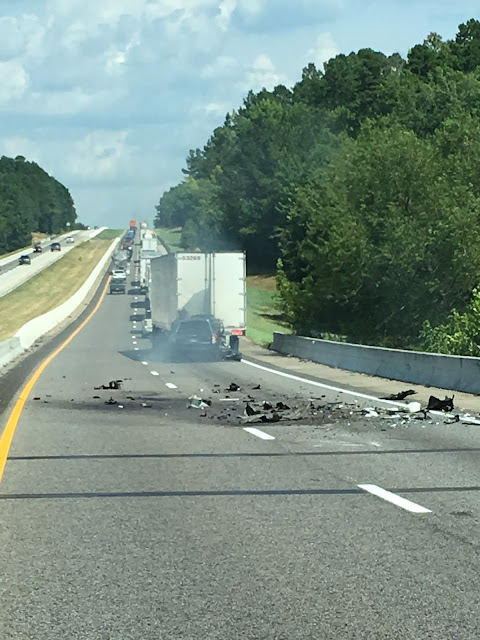 As I drove past the accident scene, I saw the driver's head sticking awkwardly out of the shattered side window, and I knew he was dead.  I told Melody not to look.  I was concerned about the car catching fire, so I moved the Jeep to the far side of the impact area, just to be safe.  I parked, and started to suggest that Melody try calling 911, but given that I had no idea exactly where we were other than on I-20 East in Texas, I didn't know what other identifying information we could provide.  Melody instead called my parents, and I'm really glad that they could keep her occupied while I turned my attention to the accident.

I started to run towards the truck, but remembered that I had a fire extinguisher that I had just purchased before the trip, and I quickly retrieved it.  I approached the truck driver, who was still in the cab of his truck, and asked him if he was okay.  He didn't seem to understand at first, but I asked again and he nodded.  I ran to the back of the truck, and before I could do anything else, a man ran over to me and grabbed the fire extinguisher out of my hands.  Apparently, the car was on fire, and a couple of guys were attempting to put it out.  They were successful putting out the fire, and I found out that the two men were truck drivers heading west who saw the accident scene and stopped to help.  They had both used up their fire extinguishers, so my arrival with one was timely. 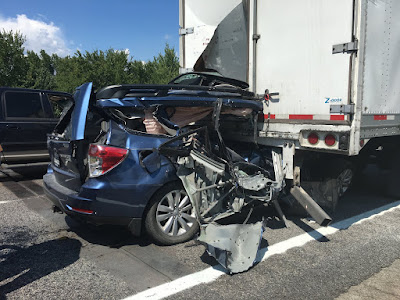 We began to assist one of the car's passengers, a little girl, who was in the backseat, yelling and crying for her daddy (apparently the now-deceased driver).  Paramedics showed up to take over and they helped get the young girl, who we later found out was 9-years old, out of the car.  We also later read that she suffered two broken legs in the impact.  While she was loaded into an ambulance, another paramedic asked me if I knew what happened, and it became clear that, of those who stopped to help, I was the only one who witnessed the collision.

The other truck drivers who stopped to help began to direct traffic, as a large backup had formed on the highway behind the accident.  Passersby were taking cellphone pictures of the driver of the car, given how gruesome it looked, and someone asked if we had a blanket or towel we could place over the body.  I ran back to our Jeep to get a blanket, and to check on Melody.  I gave her and my parents an update on what happened.  Melody was pretty shook up, but I am so glad that my parents stayed on the phone with her to keep her calm.  I told her to keep praying. 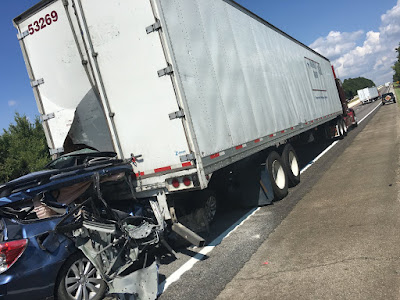 One of the paramedics returned from the ambulance and told us that there was another person in the vehicle, the young 8-year old brother of little girl.  He was in the front passenger seat.  We quickly looked and it was clear that he didn't survive.  He had been decapitated, and I noticed for the first time pieces of flesh strewn across the side of the car.  It really shook me up.

The driver of the truck involved in the accident kept his distance from the rest of us.  He took a lot of pictures, and was on the phone the whole time.  A fire engine arrived, and the fire personnel took over.  Since the other truck drivers who stopped to help weren't needed, they left.  But they both shook hands with me, and offered words of condolences before they left.  I had to remain since I had to give statements to the police. 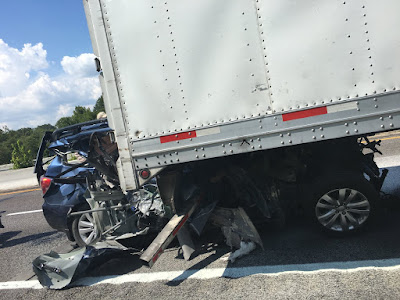 I described the accident from my point of view to one of the fire personnel, then to a sheriff's deputy, and then to a state trooper.  We were there for over an hour.  I kept going back to our Jeep to check on Melody.  Finally, we were cleared to leave, but it was at least another 20 minutes before I was calm enough to begin driving.  It was a horrific experience.  All we could do was pray.

Melody and I talked quite a bit about it all.  I was careful about what I shared with her, but I wanted her to understand that these things happen.  It brought back a lot of memories of a major car accident my family had experienced back when I was 18, in which my grandparents were killed.  I'm so thankful for the personal relationship I have as a follower of Christ, and the promise of eternal life with Him.  It provides some level of comfort after a traumatic experience like this one.

We continued a few miles down the road, then exited to get gas, use a rest room, and get snacks.  While we were on this break, I started to reflect on what happened, and I got very emotional.  I thought about the night my wife, Teresa, went to be with the Lord, and the flood of memories brought tears to my eyes.  Melody was sympathetic, and gave me a big hug.

Returning to the highway, we decided that we didn't want to keep driving given how shook up we were.  Our intent was to get closer to Little Rock, Arkansas, for the night, but I found a hotel for us just outside of Shreveport, Louisiana, and made a reservation.  It was about an hour ahead.  It was also my first time in the state of Louisiana. 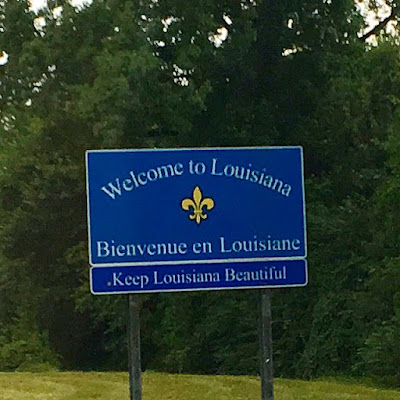 There was a Cracker Barrel right next to the hotel, so we got some dinner, then crashed (bad pun) for the evening.  We prayed a lot that night.  I didn't sleep well, either.

It was tough to get going the next morning, but we got on the road kind of early.  Right after hitting the road, it started to rain, and it rained hard for the next few hours.  It kind of fit our mood.

I didn't want to focus on the negative, but this incident marred much of the remainder of our trip.  We were still a few days from home, and there were many sites we would still see, but we really just wanted to get home.  There was also some degree of post-traumatic stress disorder (PTSD), which impacted me as I drove.  I hated driving around trucks, and I had a hard time maintaining my speed on the interstates.  I was so afraid of losing control of our Jeep.

As we celebrate our country today, please take care in all you do.  Stay safe, enjoy your time with loved ones, tell them how much you love them, and have a wonderful day!