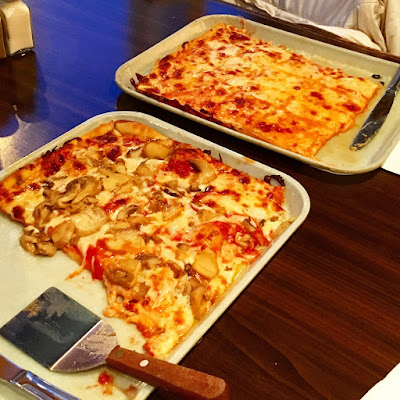 I consider myself a pizza connoisseur.  Though it is not the best thing for me to eat, I can’t help trying an old favorite or a brand new, never-tried-before pizza parlor.  So many of my favorites over the years have disappeared off the map, many of them childhood favorites that helped develop my pizza palette, and I miss them terribly.  I’m sure they weren’t necessarily good, at least not all of them.

Places like Shakey’s were pretty awesome, though it likely wasn’t the pizza, but the ambience that I remember so well.  In the mid- to late-70s, my grandfather, Kenny Fulcher, displayed his powerful trumpet playing chops with a Dixieland Jazz band called Southern Comfort every Friday night at the Rockville, MD, Shakey’s restaurant, on the Pike.  The place always seemed packed with patrons, and the pizza wasn’t bad.  It closed back in the 80s, eventually replaced by a Hooter’s.  Where Shakey’s was certainly children-friendly, Hooter’s is not.

I’ve mentioned this place once before on this blog, but another favorite pizza restaurant was the Dino Restaurant, in Suitland, MD.  It’s also long gone, but not forgotten.  Eating at Dino’s was a lot like eating in someone’s Italian dining room.  It seemed very formal to my child eyes, but we loved going here for special occasions, or on a Friday night when we had a craving for it.  It was very similar to Ledo’s recipe, with a somewhat thin, rectangular crust, slightly sweet sauce, and nicely portioned layer of cheese.  I remember going more than a few times with my grandparents, and once tried anchovies, which my grandfather would order separately and add on to his slices of pizza.  The Dino is missed.

I generally stay away from the chains (though I know Shakey’s was a chain, and Ledo’s, my current favorite, is, too), but I’m going to mention Pizza Hut.  I haven’t liked their pizza for many years, but when I was a kid, we went to Pizza Hut often, and it was pretty good.  The crust was always thicker than anything else we tried, and the cheese was laid on pretty thick, too.  I guess it was the pan pizza that really attracted us, though, and we loved every greasy slice.  While my family always seemed to go to the Clinton, MD, store, it was the Upper Marlboro Pizza Hut, near Osborne Road on 301, that became “ours.”  I went to Frederick Douglass High School, and the school’s band adopted it as our hangout.  After every football game or concert, we would gather there for a celebratory pizza.

Speaking of Clinton, another really good pizza place was Margellina’s.  I didn’t “discover” them until I was in my 20s, but it became a favorite of mine, and I loved dragging friends there to eat.  My parents loved it, too.  Many times, I’d order a couple of pies and take them home.  They were really good, slightly thick, and packed with toppings.  They were unique enough to want to come back often.

A shopping center near my childhood home in Upper Marlboro opened a Pizza Oven restaurant in the early 80s.  While the pizza was nothing special, it really grew on me and the thick tomato sauce and thin crust satisfied my pizza cravings often.  They were a fairly decent local chain for a while, but now there’s only one left in the DC area that I can find, near Riverdale, MD, just off of the Baltimore-Washington Parkway.  Ironically, it’s in the exact same shop that my parents used to get their pizza fixes when I was a baby and we lived in Riverdale, called the Pizza Wheel.

In my mid 20s, I moved in with my cousin, Dan, in Montgomery Village, MD.  MV seemed far from where I grew up, and I had to find all new pizza places and learn what was good.  Dan was a pizza guy, too, though, and he knew where to get the good stuff.  He and I began ordering a large pizza from Armand’s Chicago Pizzeria almost every Friday.  They delivered, which was perfect, and he and I could put away a large pizza easily.  Armand’s pizza was thick, Chicago-style, and had a slightly bitter, thick tomato sauce.  And we loved it.  Our regular order was pepperoni, mushrooms, and extra cheese.  There are still a couple of Armand’s in the area, though they seem to come and go.  There was one in Bowie, near my parent’s place, but it only lasted a few years.  I don’t know if the MV store is still there, but there is one in Silver Spring, not too far from my office, and I surprise my management team with a pizza lunch every once in a while.

I’m still searching for good pizza places in Howard County, where I live, but I haven’t been very successful.  My current favorite is Trattoria E Pizzeria***, on Guilford Road at the King’s Contrivance Village Center.  It’s a New York-style pizza that retains its Italian heritage.  I wish they delivered, but I don’t mind going to pick up a pie when I get a craving for it.

Some are pretty good, many are not so great, though I’ll say I did really like Three Brother’s and was saddened that the Columbia location closed.  The Ledo’s chain is the closest to great, but they’re still not at the level of the Original Ledo Restaurant**** (College Park) and TJ Elliot’s**** (Bowie – they use the original recipe).

So my search for great pizza continues.  If you have recommendations, please pass them along.