I have been so so fortunate to travel to several exotic places in my job as a manager/cartographer, namely Oklahoma City, Los Angeles, Oklahoma City, Palm Coast, FL, Oklahoma City....well, okay, not exactly exotic.  I'm kind of sick of the repeated trips to OK City.  But I really had a great opportunity last week to travel to a place that everyone should visit at least once in their life:  the Grand Canyon.  This was a legitimate work-related trip to speak at a conference attended by helicopter tour pilots.  What a great location, though! 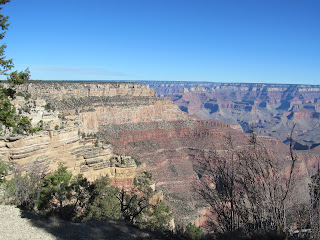 Since it was much too expensive to fly directly to the canyon, or even to a nearby town like Flagstaff, AZ, I ended up flying in to Las Vegas and driving the 4.5 or so hours to the Grand Canyon.  This was fine with me, since it would also take me down a portion of old Route 66, another one of my road trip passions.  In addition, the time in the car alone would give me opportunity to talk with God, something that I also enjoy and put to good use during my cross-country  road trips from my younger days.  I had a lot to talk about with Him.  The only unfortunate part of the trip was that I was required to take the economy car as my rental.  I ended up with an almost new Fiat 500.  This car is really small.  And I own a Mazda MX-5 Miata, a little 2-seat sports car, so I know small cars.  The Fiat is trying to compete with the Mini Cooper, but my opinion is that the Fiat is a cheap competitor.  It isn't very comfortable, has no get-up-and-go, and just looks weird.  But that's the car I was dealt.  So off I went. 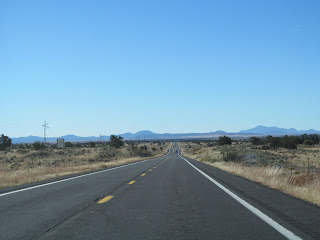 North-western Arizona is kind of mountainous, but extremely barren and desert-like country.  But I like it.  It gives me the look and feel of really being Out West.  There is something about being in this part of the country that causes me to feel like I am far from home, which I am, but it goes even further.  It has a beauty to it that can't be matched by anything you can see back east.  I'd imagine this is something in my blood, since I know that my grandfather, Chester "Pap" Freed loved reading books about The West, and, when given the opportunity to visit his long-lost brother in Idaho (along with three of his sons, my Dad included) back in the mid-70s, he jumped at the chance and really had a great time.  I'm convinced every state, and I've now been to 41 of them, has a unique look to it.  Arizona is one of those that has multiple looks to it, from the mountainous, forested northern section, to the deserts of the west.  I really like it.

The history and culture of Route 66 is another draw for me.  Route 66 points to a different era, one that I feel such a connection to, the Forties and Fifties in particular.  I sometimes feel like I grew up at the wrong time.  I love the Forties, from World War 2 history and the Big Band era, to the Fifties, with the great cars, early Rock and Roll, and an innocence that is absent in today's world. 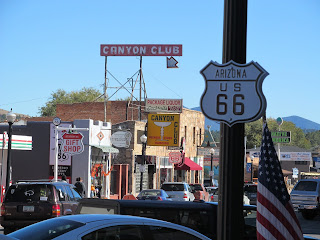 Williams, AZ, the last town bypassed by Interstate 40, which replaced Route 66 in Arizona, back in 1984, has completely adopted that persona of a different era, and has Fifties-style diners, lots of neon signs, and store after store pushing Route 66 t-shirts, hats, and memorabilia.  It's a lot of fun.  I stopped at Cruiser's Cafe 66 and enjoyed a bowl of good, spicy chili and tender pulled-pork BBQ.  If not for my diabetes, I might have gotten a shake to go. 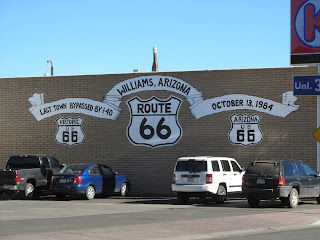 Williams is also the "gateway" to the Grand Canyon, as this is where one would jump off I-40 and head north towards the canyon.  It was dark by the time I started up this road, and, almost immediately after I left the town, I saw a herd of elk on the side of the dark road.  This meant I had better stay alert.  One elk was easily larger than my little Fiat.

I arrived in Tusayan and my Best Western Hotel at around 9 and collapsed into bed almost immediately.  I just can't drive the long-distances like I could in my younger days without exhausting myself, and after 6+ hours in a plane, and then another 5 hours of driving, I needed my sleep.  Fortunately, the following day wouldn't require me to appear at the conference, so I was free to spend part of it at the Grand Canyon. 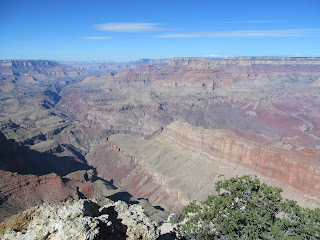 I awoke early and got ready for my drive thru the Grand Canyon.  Words and pictures cannot come close to describing it.  It is just something every individual has to experience.  This was my third trip to the Grand Canyon, and it never gets old.  It is just so BIG!  One of God's greatest earthly creations.  I just can't describe it; I can only encourage you to go see it with your own eyes.  Heavenly Father, you created all things, and beauty is in the eyes of the beholder, but the Grand Canyon doesn't compare with anything else I've seen.  I took close to 50 pictures and they don't capture it's immense size and spectacular scenery.  I can't describe it, so I'm going to stop here.

I spoke at the conference the following day.  All I can say about it is that helicopter pilots are a different breed.

I awoke early on Friday, packed up, and headed south, back to Williams, and then west down Route 66.  It was such a great time!  I reminisced about my earlier trips down the same highway, enjoyed seeing recreated Burma Shave signs beside the road, stopped at a little museum in Ash Fork, AZ, the "Flagstone Capital of the World" (the museum was run by an older couple who had moved here from Chicago to escape the cold weather in the north, including ceremoniously getting rid of their snow shovel, not knowing it could get just as cold and snowy in this part of Arizona!), and then stopping in Seligman, where Route 66 was reborn by gentlemen like Angel and Juan Delgadillo, who were determined to keep their town from dying when it was bypassed by the interstate.  Angel had a barbershop, which has now been converted into a gift shop selling all kinds of Route 66 memorabilia.  Juan ran the Snow Cap, and neat and stylized drive-in restaurant selling things like "dead chicken" and ice cream, and using his sense of humor to entertain his customers (door knobs on the wrong side of the door, a bathroom outhouse in a phone booth, and an old convertible with Santa Claus in the driver's seat and a Christmas tree in the back, parked just outside).  There was a tour bus full of Japanese tourists parked outside of Angel's barbershop when I arrived. 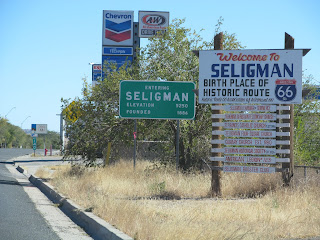 After a stop in Kingman, AZ, at Mr. D'z Route 66 Diner for lunch, I headed north again towards Las Vegas.  I had splurged a bit to stay at the Luxor hotel (a huge pyramid), and I bought a ticket to see Criss Angel, a celebrity magician.  But Las Vegas just holds no appeal to me.  It is filled with twenty- and thirty-somethings who all seem to drink to excess, dress too provocatively, and gamble for the heck of it.  Vegas has officially dropped the "family-atmosphere" it pushed a decade ago, and is now pushing an atmosphere focused on sex (the Luxor had a "dancer" on a runway-style stage in the middle of the casino dressed in her underwear, in full view of anyone and everyone, including minors!).  You can bet I won't ever bring my young daughter to this town!  I was up early on Saturday morning (3 a.m. Vegas time) to check out and get to the airport for my early flight home.  Walking through the Luxor, I was surprised to see that the place was still hopping, with young women drunk on whatever booze they'd been drinking, dressed in skimpy dresses and barely able to walk, and couples sitting on tables making out in various corners of the casino.... I couldn't get out fast enough.

All in all, it was a wonderful trip, and I will forever look at it in appreciation and opportunity related to my job.  I'm also thankful that God gives us such beauty to appreciate in our world.  I know it can't compare to what we have waiting for us in Heaven, but, for what we have here on Earth, it's pretty darn cool!
Posted by Eric Freed at 11:35 PM