Impact of the Accident

We arrived home after a horrible week on the road following the accident in Canada and the death of my grandparents.  The funeral was very sad.  Both of my grandparent's coffins were at the front of the room, and there were hundreds present for the service.  They were closed caskets due to the impact of their bodies following the accident and fire.  A few musicians came and performed some classic traditional jazz tunes, including Van Perry on bass.  Rev. George Aist performed the service.  Afterwards, we drove to the cemetery in Falls Church, VA, where their coffins were placed in vaults within a large mausoleum.  It was a very sad day, and the service ended at almost the same time as the accident exactly one week prior.

We went home, but were still suffering because our air conditioning broke, and it was hot!  We also were trying to deal with the ramifications of the accident.  Our damaged van was in need of repairs, though the damage was a constant reminder of the accident and, long-term, we knew we would end up getting a new van.  I still had an ugly scar above my left eye, though once the stitches were removed, it looked much better.

I was due to head off to college (I was planning on attending the University of Maryland at Baltimore County (UMBC), but was having second thoughts about being away from home.  This lead me to end up applying to the College Park campus and, after numerous phone calls, I was accepted there and began making plans to commute from home instead of living near the Baltimore campus.

Day-to-day routines were no longer routine.  Our family was broken.  It had been such an awful experience for all of us, and it affected all of us in different ways.  Poor Mom was very depressed after losing both of her parents in such a devastating way, and began getting the help she needed.  As we entered into the Fall, a little bit of normalcy returned, with school taking the lead in our daily activities.  Sister Angie was a Junior in high school, though she soon started hanging out with a bad crowd, which lead her to begin sneaking out of the house and going out drinking late at night.  Her new boyfriend was much older and was a poor influence on her.  Brother Darren was kind of the forgotten one of the family, but he had sports to keep him occupied. I had a hard time making the transition to college, going from a top of the class student in high school to having difficulty with several of my classes, and trying to balance my schedule with my commute, marching band, and working with the youth group at our church.

Our faith was really the only constant, but even that was a difficult part of what we were dealing with.  Why had God allowed this to happen to us?  We were all suffering, and there didn't seem to be a solution or end to what was happening.  Our church had begun to split over Rev. Aist's future.  A small group at the church determined that a new pastor was needed, someone younger and more dynamic, and those of us who supported Rev. Aist ended up in a ridiculous battle that became more and more vicious as the year went on. The result was that Rev. Aist elected to leave, and our church family was scattered.  It was a difficult situation, since Mom was the church secretary, Dad was the youth director and church treasurer, and I was a youth counselor.  We had attended the church since I was in 3rd grade.  It was even harder as there were many of our friends who had supported pushing Rev. Aist out, and they acted as if we were wrong.  A simple disagreement had led to the end of many of these friendships.  Our family left the church and we began searching for a new place to worship.

Things came to a head with my sister, and she was confronted about her boyfriend and sneaking out of the house.  The result was she made a complete change to her lifestyle, changed her diet, stayed home all the time, and took over making meals for the family.  She started a diet that soon spiraled out of control and became a full-blown case of anorexia.  Within a year, she was below 100 lbs. and was admitted to a hospital with an eating disorder program.  She had to drop out of school and began to see a tutor.

Darren, now in high school, was having his own problems.  He had been growing like a weed and was now over 6 feet tall, and, because of his size, became the target of others wanting to fight.  He also struggled with his classes, but he also became much more independent and had created his own identity.

Things continued to get worse before they got better.  Mom continued to struggle with depression, and this would continue for 20+ years.  She also battled an aggressive breast cancer resulting in a mastectomy and breast reconstruction, followed by chemo.  She was declared cancer-free last year.  Angie also continues to struggle with her anorexia, and this continues to this day.  She has been in and out of hospitals and has been unable to hold a job for any length of time.  She can't support herself, so she continues to live at home with Mom & Dad.  Darren also has struggled, but has established his independence despite job & financial difficulties.  He is now engaged to a wonderful girl with two teenage daughters of her own, and seems to have his life going in the right direction.  Dad has been the glue of our family.  All along, he has tried so hard to make sure we are all successful.  It is obvious that he continues to put the rest of us before his own happiness. 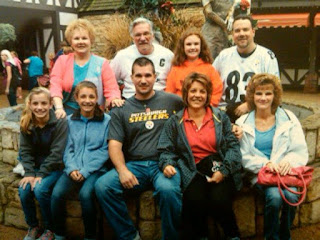 I'm convinced that what has kept us all together and sane is our faith.  God has taken such good care of us.  He is our savior, and I know that despite the hardships we've experienced, HE is the reason our lives are as blessed as they are.  I'm so thankful for all He has given us.  Life is good and gets better every day.
Posted by Eric Freed at 2:42 PM