I spent my Saturday doing nothing I had planned to do.  I came down with a fairly horrendous cold, and had a full day of feeling miserable.  My poor daughter, also suffering from a cold, joined me.  I slept until 9:30 a.m., a luxury for a guy who gets up before the sun every day for work, but I didn't sleep well.  After a light breakfast, I fell asleep on the couch for another 3 hours.  Melody stayed busy playing games online with her grandfather.  I felt awful...my head was pounding, my nose stuffy, my throat sore, my body aching...even my hair hurt.  With regular doses of Nyquil & Dayquil, I tried to weather the storm.  What else could I do?  So, a whole lot of nothing is what we did.

Today was the day of remembrance for little Miss Kyleigh, who passed away last week.  I had every intention of attending, but with my the illness, there was no way I could make the drive, and I certainly didn't want to pass my cold on to anyone else.  My dear friend, Shawna, Kyleigh's mother, was on my mind all day.  I continue to pray for her each day, but I knew today would be a difficult day for her.  Fortunately, I saw some pictures from the event and it was very well attended.  I'm very happy about that.  Shawna and I are already making plans to get together another time.

After a second nap, and going a bit stir crazy, we watched a movie, WE BOUGHT A ZOO.  It was a feel-good movie and we did enjoy it, but, once again, I was very bothered by Hollywood's handling of the death of a spouse.  The story, briefly, is about a family of four, a husband & wife, and their two children, a son, 14, and daughter, 7.  The wife passes away due to illness, and the family decides to move away from the city they live in and buy a zoo out in the country.  The zoo is in bad shape, and requires a lot of work to get it back up to standards that would allow it to open.  The zoo-keeper is a young single woman, and soon, in typical Hollywood style, there are sparks between the zoo-keeper and the father.  And this is where I always have an issue with how Hollywood handles these situations.  I lost my wife several years ago.  Since then, I have had several romantic relationships.  In almost every case, though, the woman I've dated becomes jealous of my dead wife.  This is typical, from what I understand through books I've read on the subject.  Hollywood, though, seems to think that the new woman in the widower's life will love him no matter what, and has no problem talking about the dead wife and listening to the husband wax poetic about his love for his dead spouse.  This just isn't reality.  And it bothers me that Hollywood, in the guise of creating a story for a movie that tugs at the heartstrings of the movie-going audience, shows so little respect to the subject of spousal death.  I get that no one wants to see a movie without a happy ending, but it's just so unrealistic.  I guess I just need to get over it, eh?  I know God has a happy ending story for me, and I just need to have patience.

So I'm getting tired again, and despite 16 hours of sleep in the last 24, I'm going to take another dose of Nyquil and go to bed.  My daughter seems ready, too, especially since she didn't get a nap today.  I think Faithful Pup Scout is the only one who has enjoyed our day of laying on the couch and doing nothing.  She doesn't normally get this much time with us.  Hoping to feel better tomorrow. 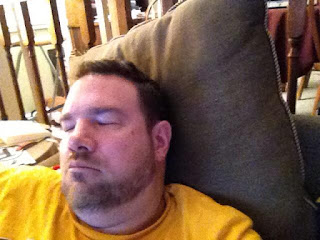