"Gettin' old ain't for sissies!"  My father says this a lot.  It's his favorite saying, at least for the moment.  He has a lot of favorite sayings, but they are only favorites for a short time before he comes up with another one.  "If it ain't rats, it's roaches."  "Jiminy Christmas."  "You gotta do what you gotta do."  "Long time, no see....kind of like a dead fish."  "Out of sight, out of mind."  "The more things change, the more they stay the same."  "You can't go home again."  "You only live once."  And, "Hang in there, son."  I get that last one a lot.

I was thinking about age over the past few days.  I'm not as young as I think I am, but I'm not as old as I sometimes feel.  "You're only as old as you feel."  Hmmm....I'm feeling a bit old.  The cold weather is really cold.  Cold didn't used to bother me.  In fact, I love the Winter, and I love snow even more.  While Fall is my favorite season, Winter is close behind, and I really do feel like a kid when it snows.  That only lasts a little while, though, because I have to shovel it after it falls.  And when it's this cold out, it only feels worse.  So I'm feeling a bit sore right now, and it's making me feel old.  Sore back. Sore legs.  Shoulder aches.  I wish someone would give me a massage.  My wife used to give me great massages...

I just watched a movie about aging.  LAST VEGAS.  It's another one of those buddy movies about a bunch of old guys trying to feel young again by going to Las Vegas, and stars Michael Douglas, Morgan Freeman, Kevin Kline, and Robert De Niro.  The sex was gratuitous, and there were way too many scantily clad young women.  I'd be embarrassed watching it if my daughter was here. I'm embarrassed and she's not here. 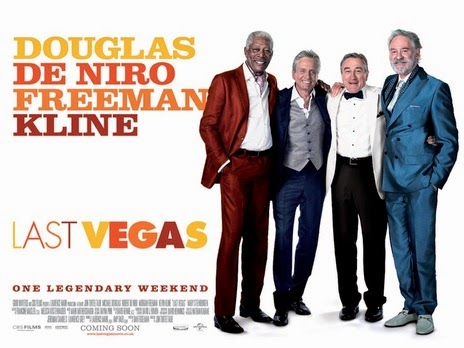 Hollywood is in the business of making money, and since they want to appeal to the base of humanity, most movies have this kind of stuff.  I wish they'd just tell a story.  This could have been a good story.  The gist of the movie is that one of the guys (Douglas) has been dating a woman half his age, and he proposes to her.  There's a very awkward scene of him having a conversation with the young girl's father, obviously disappointed, and he's younger than the guy she's marrying.  Anyway, when the other old buddies find out, they decide they all need to meet in Vegas for a bachelor party.  Things get a bit out of hand when they hit the casino up for over a $100K and end up getting a penthouse suite and go out partying with a bunch of very young women who don't like wearing lots of clothing.  Further, they find out that being old is kind of a badge of honor when some of the women become "touchy-feely" with them.  One young lady ends up in the bedroom with Kevin Kline's character, who is married, and whose wife sent him to Vegas with a condom and a little blue pill, telling him, "What happens in Vegas, stays in Vegas."  The woman tells Kline that she's tired of the young guys, and is turned on because Kline is married, so she takes off her clothes.  He finally wakes up and stops her, explaining that he really does love his wife and knows he shouldn't be doing this.  And, so, I guess that makes everything okay.  Douglas's character also realizes that he's too old to be marrying his young fiancee, especially after he falls in love with a lounge singer closer to his age.  So he breaks off the wedding.  And again, that makes everything okay.

I'm really bothered by how little respect Hollywood seems to show towards women in particular, but also to marriage.  The creators of this movie seem to think they've come up with a very deep and meaningful story where these four old friends come to grips with their age, when what they've really done is allowed them to totally disregard true love, and even marriage, while they're partying with much younger women who think they're so great, feeding their egos.  I live a pretty staid life, but even I feel like this is all pretty unrealistic.

There is one thing that I did come away with that may be good... Because I tend to be pretty reserved, I've missed out on a lot of fun things over the past decade, which could be looked at as the prime of my life.  I'm in my mid-40s now, and I am feeling old.  I've allowed myself to waste these prime years, in some respect.  Yes, being a father to my young daughter comes first, but beyond that, I really haven't done anything for myself.  And maybe I need to do more for myself.  I'm not saying I should head out to Las Vegas and party with women half my age, but I don't need to be sitting around waiting for some other body part to go haywire or stop working.  Life is meant to be lived.  Just live it in a rational way.  The way God wants us to live it.  Fully.

Enjoy the rest of this day off, and have a great evening!