Complaining always comes across as a negative, and that isn't really how I view things.  However, it seems recently that I'm becoming that typical Grumpy Old Man as I get older, and today may be an indication that I need to start thinking younger.

That said, my daughter Melody and I went to Six Flags America, located in either Bowie, Upper Marlboro, Largo, Mitchellville, or Kettering, Maryland.  Today seemed like the best day of the weekend, so we decided it would be a good day to visit the park after purchasing season tickets earlier in the month.  Six Flags had advertised a big sale on their season tickets, and a free upgrade to their Gold pass upon using them (providing admission to ALL Six Flags parks nationwide), plus free parking, all for about $60 each, and I grabbed them.  That's a pretty good deal.  When I got season passes two years ago, we took advantage and visited Six Flags America, Magic Mountain (in Valencia, CA), Great America (Chicago), and St. Louis (in St. Louis, naturally), dramatically increasing our roller coaster ride totals.

Here's the deal, though.  Six Flags is just not a very well run operation in my opinion.  Their parks just don't feel safe, and the peripheral stuff, like food, is outrageously expensive and not very good, particularly when compared to many of the top parks throughout the country.  For example, Busch Gardens is a beautiful theme park with great food, and is a better value based on food quality.  Again, my opinion, but one certainly shared by my entire family.  Today, we went to the Johnny Rocket's restaurant inside the park.  The selection was nothing like a "real" Johnny Rocket's, with the only items on the menu being a double burger, a single burger, and chicken tenders, with a side of fries & onion rings.  Melody ordered the chicken tenders and I got a single burger, plus a bottle of water and a "regular" diet coke.  While the burger came out very quickly, the restaurant staff was inadequately prepared for the small group of people who happened to be ordering food at that moment, and we waited for ten minutes while the chicken tenders were cooked up in the deep fryer.  Once the tenders arrived, the burger was cold to the touch.  Worse was the price.  $35 for our meal.  That included $4.39 for a 12-ounce cup of soda and mostly ice.  Both the burger and the tenders were as basic as they could be, and memorable only due to the price. 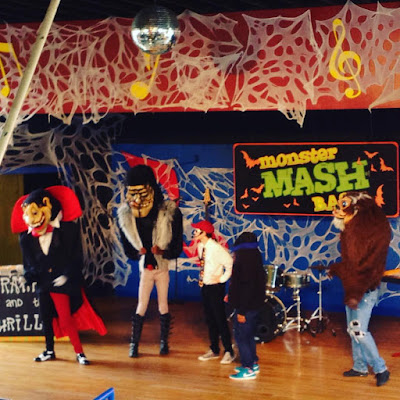 We saw a very ridiculous show called Monster Mash Bash, starring ridiculously costumed Dracula, the Wolfman, "Frankie" the Frankenstein Monster, and a "headless" Igor.  The music was a mix of pop tunes sung by the monsters, with rap-style lyrics.  Did I mention it was ridiculous?

I've very rarely ever felt unsafe on an amusement ride, particularly at a major amusement park like Six Flags.  Today was the exception.  The ride attendants didn't seem very thrilled to be working today, and their lapses in basic safety checks were jarring and disturbing.  One of my favorite rides at this park is the Wild One, an old wooden coaster built early last century and moved from New England to the park back in its Wild World days in the 80s.  It's pretty awesome, a rickety old thrill ride with lots of character.  Upon boarding the ride and landing in our seats, the lap bar was left unlocked.  The attendants breezily ran through their ride-checks without realizing that the lap bars were not locked.  When they got to our row, I showed the attendant that my lap bar wasn't locked, and she immediately looked back at the young man at the control panel and told him to press the lock button, which he clearly forgot to do, and which then engaged.  They went back to the front of the coaster and repeated their checks without missing a beat.  I was horrified by their carelessness and lack of concern over something so basic yet so vitally important, especially since they didn't even notice despite running through half the train before I pointed it out to them.  That's an absolutely egregious mistake.


Later, on Apocalypse, their stand-up coaster, Melody and I settled into our "stools" and I plugged in the safety belt into the shoulder harness.  I didn't realize that the belt had not engaged, and had fallen out.  When the ride attendant came by, she took the belt and apparently buckled it in for me again.  I said to her, "Wow, I thought it was already buckled in."  She just giggled and moved on.  I looked at the belt and it fell out of the buckle once again, without me touching it.  The ride was about to begin, so I quickly buckled it a third time, yanking on it to make sure it was engaged.  When the ride started, I was so paranoid that it was going to come undone again that I didn't enjoy the ride at all.  And when the ride did end, coming to a stop just outside the loading station, the ride shutdown and wouldn't advance, stranding us on the coaster.  We watched as the ride attendants announced to those waiting that the ride was out of service, and maintenance was called.  We were back in motion and off the ride in less than five minutes, but there was clearly some kind of technical issue.  Whether it was due to the the safety belts or not isn't clear, but I certainly didn't feel safe.  After one more ride, we called it a day and left the park.

I'm not sure how the rest of the day went for those visiting the park, but it was also the start of the Halloween scare season, and while it appears that many were looking forward to the haunted houses that would be opening up at nightfall, I wasn't interested.  I can't help but be reminded that a huge fight broke out at this very park two short years ago during their Halloween season, resulting in at least one major injury.  I wanted nothing to do with Halloween at this park, so I'm glad we left when we did.

Did I regret buying the season tickets?  No.  It was just too good of a deal to pass it up.  And since they are good throughout the entire 2016 season, it was worth it to me.  But I will be so much more vigilant and observant at every amusement park I visit especially the Six Flags parks.  I hope I won't have reason to worry.