The Muppets, The Pope, and The Pirates

I just watched THE MUPPETS, the new incarnation of the late Jim Henson's wonderful puppet troupe.  I'm old enough to remember THE MUPPET SHOW from the 70s, and it was a huge hit and favorite of mine.  This new show is really bad.  I wanted to love it, but it's sophomoric and not at all true to the characters I grew up with.  Kermit The Frog says "Hell," "Sexy," and takes the Lord's name in vain, and it's so out of character as to make it appear that the writers did it only for shock value.  The show is written like most sitcoms these days, with a documentary-like feel (The Office), and purports to show the "real," behind-the-scenes lives of the Muppet characters.  Zoot, my favorite saxophone player in the Electric Mayhem house band, comes across like he isn't "all there" in the head, which was kind of charming in a naive way in the past, but now appears to be a result of a drinking problem.  And Fozzy Bear is "dating" an attractive young lady whose parent's come across as "racists," unapproving of their daughter's new "bear-friend."  The whole thing is very un-funny, and my daughter and I don't approve.  The 70s version of the show didn't have to resort to these attempts at humor, and was hilarious for the characters and the crazy acts, as well as the wonderful performers (Jim Henson and Co.).  This script could easily be applied to any other sitcom on the air, and the format for the show just isn't appropriate.  It doesn't fit the Muppets.  They deserve better.

It was all doom and gloom for commuters this week with the Pope in town, and my office prepared by emphasizing telework.  It also happened to be National Telework Week, so the timing was perfect.  As much as I would have liked to telework, my responsibilities do not really fit the model, so I found myself driving in to downtown Silver Spring, expecting the worst.  Fortunately, I left the house early and encountered very few traffic issues, other than a little bit of stop-and-go on the Capital Beltway.  Either many people decided to heed the warnings about the disastrous traffic and stay at home to telework, or the commute really wasn't all that bad.  I think it was probably a combination of the two, but it certainly wasn't the disaster the media predicted.  And it was kind of nice at the office, with many of my employees at home.  It kind of felt like a Holiday, though with the Pope here, it was more of a Holyday.  The afternoon commute was even better.  I hope tomorrow goes just as well, though I'm worried that everyone who stayed home will hear that traffic wasn't bad, and they'll return to work tomorrow, making the predicted traffic a reality.  I'm hoping for a Pope-like miracle.

While it's much more low-key this year than the past two, the Pittsburgh Pirates Major League Baseball Club is 5 short innings away from clinching their third straight play-off berth.  After 20 years of losing seasons, Pirates fans are enjoying this new trend of winning, and I'm greatly looking forward to seeing if they can finally get over the hump and possibly make it to the World Series.  Their last World Championship was in 1979, when I was a wee lad of 10 years, and I am so hopeful of this opportunity.  I love baseball!  Go Bucs! 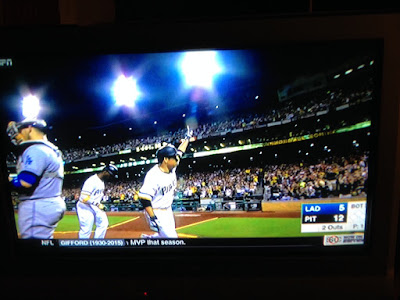