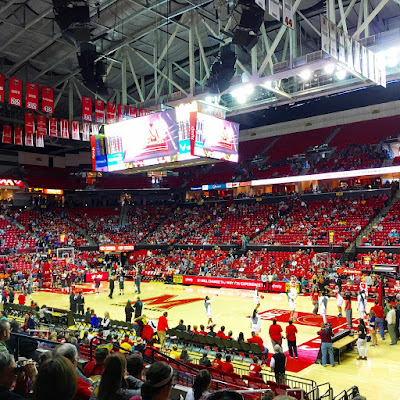 One week ago tonight, my daughter and I attended the Maryland Terrapins Women's Basketball Team's Senior Night, at XFINITY Center at the University of Maryland, in College Park.  It was a great night, and the Terps beat a clearly overmatched Minnesota Golden Gophers team.  We had a great time, and it was clear to us the Terps had a special team.  They went into the Big Ten Tournament over the past half week and played really well.  Today was the championship game, and the #5 nationally ranked Terps soundly defeated a Michigan State team that had beaten them twice this year, winning their second straight Big Ten Championship.  The victory may give the Terps a #1 seeding in the NCAA Tournament games coming up in the next few weeks.  They are a clear Final Four team, and we're hoping that they do well.  Well enough to, maybe, bring home another National Championship.  Congratulations, Lady Terps, the 2016 Big Ten Champions!

Have a great evening, everyone!
Posted by Eric Freed at 9:05 PM