We awoke early.  It was tough to get going because we were up so late last night, and the hectic desert driving in the dark wore on me.  But I was so excited to return to the Grand Canyon, and see daughter Melody experience it for the first time.

While Melody was getting ready, I saw an ad for an activity at the Grand Canyon that we could do, and I quickly made a reservation.  I intentionally kept any details secret from Melody for now.

We had a nice full breakfast at the adjacent restaurant, then hit the road out of Tuba City.  It wasn't long before we saw the first signs of the canyon.  We entered the park and soon arrived at Desert View, on the eastern edge of Grand Canyon National Park. 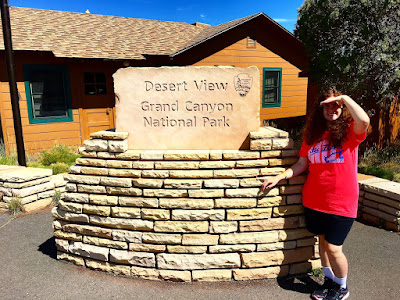 It was really hot, even this early in the day, but I could hardly wait to see Melody's reaction to her first sight of the canyon.  We descended the slight rise from the parking lot to the familiar tower at the Desert View overlook, and there it was:  the Grand Canyon!  Melody was duly impressed, and it took her a moment to take it all in.  It's just SO big! 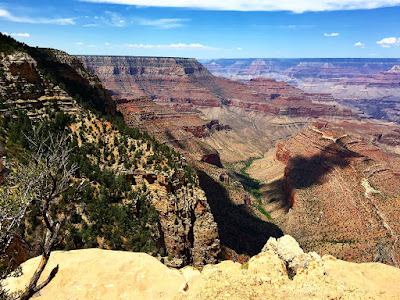 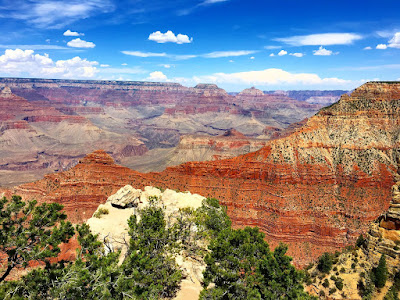 We spent much of the rest of the day exploring the south rim of the canyon, stopping at all of the view points and overlooks along the south rim road.  We eventually arrived at the official visitor's center, and we looked for a place to grab a late lunch.  The food was good, but I observed that there were a lot of flies in the building, which was a very real nuisance. 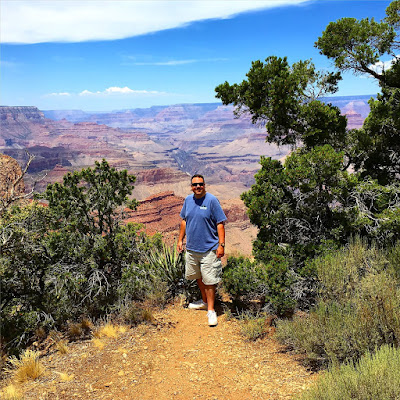 After eating, we explored the gift shop, walked around a bit more, took one more look at the canyon, then we headed south out of the park.  The next stop was the surprise that I had arranged that morning.  We went to the Grand Canyon Airport.  Melody was really surprised to discover we would be riding in a plane out over and around the Grand Canyon.  We checked in to our flight at Grand Canyon Airlines, and we soon boarded our plane.  Melody and I were in the last two seats in the back, which provided us with the best views out of the panoramic windows on each side of the plane. 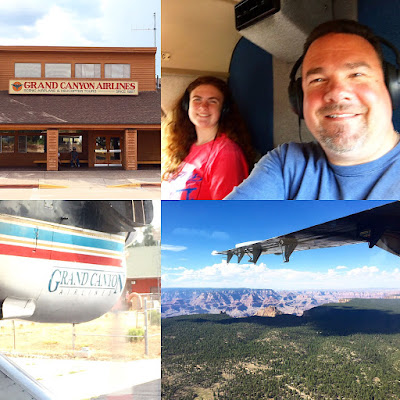 The plane taxied to the runway and began the run into the air.  There was a little bit of nervousness for both of us, for me mostly because I had never before been on a plane that small.  We took to the air, and the plane headed back around to the eastern side of the canyon.  We took lots of pictures and video as we went.  Melody was on the right side, and I was on the left, so we were able to get some very unique views.

Having worked on the Grand Canyon aeronautical chart in my job as a cartographer, I was very familiar with the topography of the canyon, as well as the routes that the air tour operators take around the canyon.  It was quite different being up in the air over the canyon in a plane, but I could at least anticipate a little bit what I was seeing.  Still, it does nothing to prepare one for the awe of the spectacular scenery. 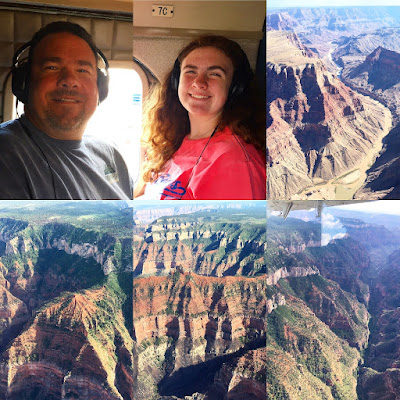 I looked over at Melody and she didn't look so good.  I asked her if she was okay, and she revealed that she was feeling nauseous.  Poor girl was just a bit air sick.  I could understand that.  We had never done anything like this, and while the ride was smooth overall, it was nothing like riding on a large airliner.

After completing the full circuit around the route of the canyon, the plane began the return to Grand Canyon Airport.  I looked down and saw a Grand Canyon Railway train on the tracks below.  We passed over the town of Tusayan, then we descended and quickly landed at the airport.  Melody looked greatly relieved to be on the ground.  It was a great ride, a memorable experience.  And while Melody had not felt great for much of the ride, she was feeling okay.

We grabbed a few souvenirs, then headed south again and soon arrived in Williams, AZ, the last Route 66 town to be bypassed by the interstate.  We found our hotel, right on the western edge of town, and cleaned up.  Then we headed into the town. 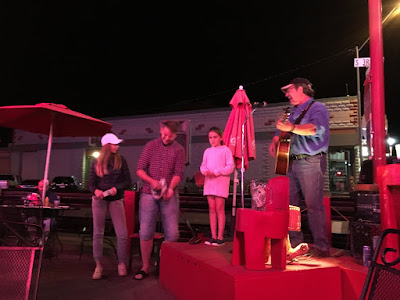 Williams was hopping!  The town was full of Route 66 cruisers, and we saw that there was live music outside at Cruiser's Cafe 66.  We got a table right next to the stage, and enjoyed a great evening of food and the music of John Carpino.  Melody told me later that this was one of the most memorable evenings of our epic journey:  hanging out in the little town Williams, sitting right next to old historic Route 66, chilling to some great live music. 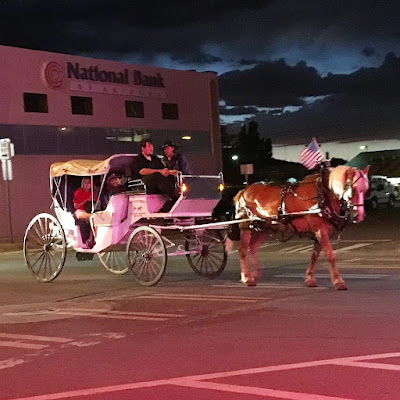 We crashed back at our hotel fairly late, but so fulfilled with the adventure of a lifetime.