Our epic road trip continued as we woke up after a wonderful day at the Grand Canyon and a really cool evening in Williams, AZ.  We went to a nearby diner for breakfast (Jessica's), where the owner wandered from table to table to talk to the guests.  Then we drove a few blocks and returned to Cruiser's to hunt for souvenirs.  We wandered through several neat shops around the downtown area before hitting the road, heading east. 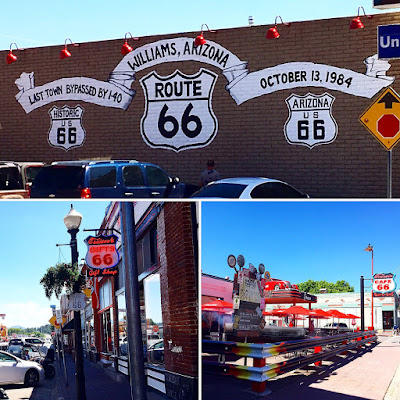 We gassed up and jumped onto Interstate 40, exiting whenever possible to drive old historic Route 66, which runs parallel to 40.  Flagstaff, AZ, is one of my favorites, and if it hadn't been so early, we likely would've stopped at one of the many great restaurants in town.  Instead, because we had gotten such a late start, we just continued heading east.

Our next stop was at Meteor Crater.  This is the "best-preserved" impact site in the world, which resulted from a collision between an asteroid and the Earth approximately 50,000 years ago.  It is one mile across, 2.4 miles in circumference and more than 550 feet deep.  There is an indoor and an outdoor viewing area, a nicely done movie documentary about meteors, and an interactive museum.  The gift shop has a nice collection of rocks, too.  Melody's favorite souvenir was purchased here, as well:  a genuine desert cactus! 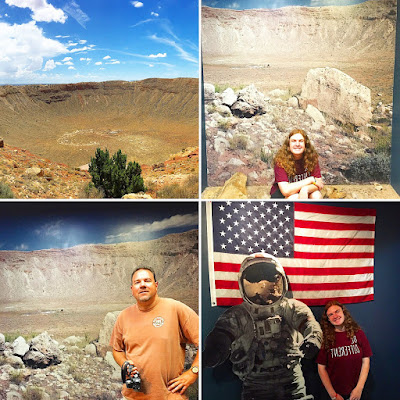 The next stop was Winslow, AZ, whose claim to fame is being named in the Eagles tune, "Take It Easy."  The famous lyric is, "Well I was standing on a corner in Winslow, Arizona, and such a fine sight to see:  it's a girl, my Lord, in a flatbed Ford, slowin' down to take a look at me."  And, sure enough, on a corner in Winslow, AZ, there's a statue of a man leaning on a lamp post, and a mural on the wall behind it of a flatbed Ford with a young lady in the driver's seat.  It's likely the most famous tourist attraction in that part of Arizona.  There are a few souvenir stores nearby, too, and lots of Eagles memorabilia.  Then we grabbed some lunch at an eatery just up the road. 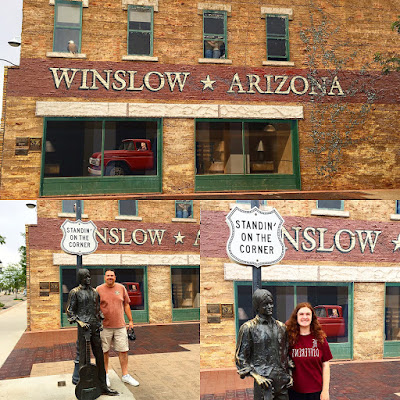 After lunching, we headed east again on I-40 to the Jack Rabbit Trading Post, near Joseph City, AZ, and famous for its "Here it is!" signs.  This is a favorite spot of mine for souvenirs along Route 66.  I stopped here in 1997 and got a favorite chili mug, one that had a recipe that became the base for my own chili recipe.  My wife and I stopped here in 2000, too.  As Melody and I were looking around, we found the stores visitor's log, which my wife and I signed on our visit 16 years ago, but the log only went back to 2002. 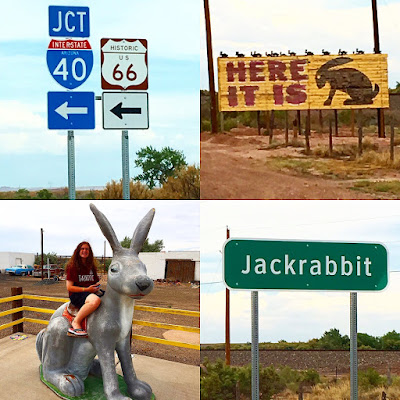 Heading east again, we drove to Holbrook, AZ, and stopped at the Wigwam Motel, a famous landmark along 66.  This place is unique because each motel room is an independent structure shaped like a wigwam.  There were many more in existence years ago, but only a few remain, and Holbrook's is one of the best examples.  The owners keep a nice collection of old cars around the property, too.  Melody and I took some pictures, then continued on to our next stop. 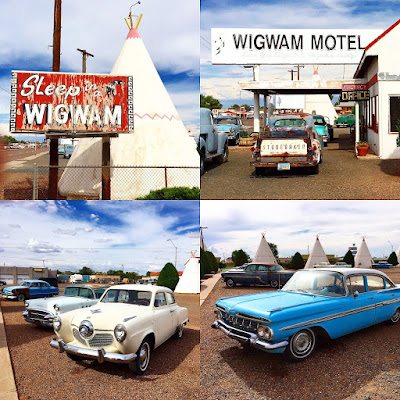 We entered Petrified Forest National Park at the south entrance, and drove north through the entire length of the park.  We stopped at the Visitor's Center, and made the requisite stops at the various overlooks.  There's a cool stop in the park where the road crosses the original alignment of old Route 66, which used to run straight through the park property.  It's nice that the park recognizes the importance of this old highway.  It began to get very overcast, and soon it began to rain.  Unfortunately, it was also closing time for the park, and the visitors centers and old park lodge were no longer open.  So we exited at the north entrance and jumped back on Interstate 40. 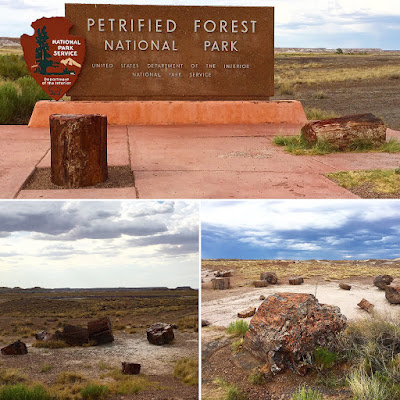 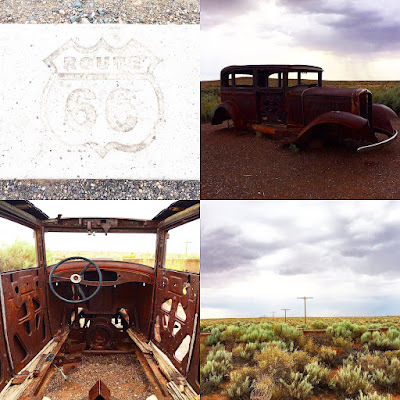 A few miles later, with the rain having passed but dusk quickly approaching, I decided to take a little off-roading adventure.  Just east of Petrified Forest, outside of the National Park boundary, the old route for 66 ran in a straight east to west line about a mile north and parallel to I-40.  It is nothing but a dirt path now, but is accessible from an exit ramp and dirt road running north to the route.  My wife and I drove it back in 2000, and a few miles west on the route will take you to the shell of the old abandoned Painted Desert Trading Post.  So we decided to check it out.  I wanted to get there before darkness fell, so I knew we'd have to hurry, since I didn't want to drive on an abandoned dirt road in the middle of nowhere in the dark.  So I found the exit, and we took the dirt road out to old Route 66.  When we reached the intersection, there was a wire fence across the road, preventing access.  I later found out, doing an Internet search, that the land is now privately owned.  That's a shame, because it really is a cool side trip adventure.  We had to turn around, though, and head back to the interstate. 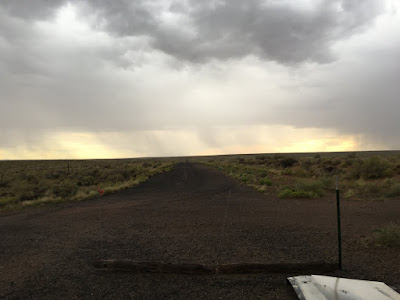 I stopped for gas and I checked for accommodations for the night.  What I really wanted to do, though, was stay at the El Rancho Hotel in Gallup, New Mexico, which was less than an hour away.  I secured a room reservation, and off we went.  It was already dark, but the drive was swift and we arrived at about 8pm.  We decided to eat at the hotel restaurant, and we had a nice night exploring the gorgeous old hotel.  It was another fine day of travel, and we were looking forward to next day's adventure. 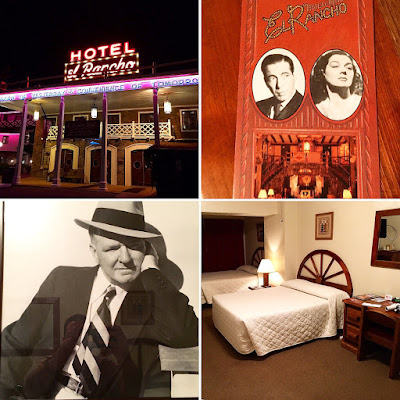