A few weeks ago, I wrote a post about a possible relationship with a very nice young lady, and the risks involved with possibly dating someone despite a large age difference.  Well, here's an update.

I found out that she's not as young as I had thought.  She looks young.  She's actually in her early 30s.  That puts her in the "almost" ten years age difference.  She's also from Pittsburgh.  How cool is that?  As a fan of all things Pittsburgh, I like her even more.  She's always smiling.  She has great hair.  She wears it up in a pony tail most days, but when she lets it down, she looks gorgeous.  She loves working with kids.  She teaches yoga to 1st thru 5th graders.  She's taken a great interest in my daughter, though they've not yet met.

Okay, so what's the problem?  She works in my office.  I am one of the lead managers in our office, and there is a definite risk involved with dating an employee, even if she is in a different office group.  She would be the subject of office gossip.  If she got a promotion, there would be those who would think she got it because (or in spite) of the fact that she's dating a manager.  It really complicates things.  So now what?  Do I still forget about her?  Is the age difference still in play?  I think she would go out with me if I asked.  Am I thinking about this too much?  The quote from the old guy sitting on his front porch in my favorite movie of all time, IT'S A WONDERFUL LIFE, reading his newspaper while George and Mary are singing "Buffalo Gals Won't You Come Out Tonight", keeps going through my head... "Why don't kiss her instead of talking her to death!?"  I'm doing too much talking.

More spiders, this time outside of my back door... 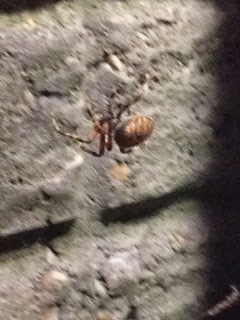 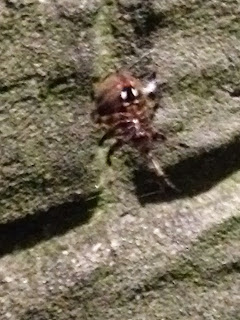 Saw quite a sight as I was headed home this afternoon.  Going north on US29 just north of White Oak, I saw a plume of smoke rising into the air, getting thicker and thicker, just as several police cars whizzed by, followed by several fire engines.  I could see up ahead that there was a car on fire.  I was  able to get a few pics as I crawled past, just after they put the fire out.  It was quite a scene. 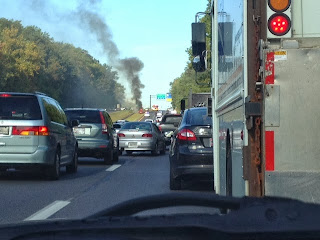 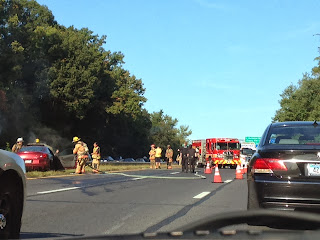 Have a great Friday, everyone!