I'm not enjoying this game.  In fact, I haven't enjoyed any moment of the two Steelers' games so far, except the first few seconds of last week's game vs. the Titans, which opened with a safety on the kick-off and 2 points for Pittsburgh.  Their play has been horrible, and has left my stomach in knots because I take my sports too seriously.

A tragic moment this morning at the Navy Yard in Washington, DC, as a gunman shot and killed a dozen people and injured more, before being shot and killed himself.  Still a lot of unknowns as to the whys, but this kind of thing shouldn't happen.  Too many innocents, people who just were in the wrong place at the wrong time, losing their lives for no reason.  It's sad, and keeps happening over and over again.  What's the answer?  I don't know.  But we need to pray for the innocents and for the crazy ones who are killing them.

Hated saying goodbye to my little girl again on the eve of another business trip.  I hate the trips to begin with, but I can't help but feel bad for my girl who just never had a normal routine.  On top of that, I'm going to miss Back To School Night tomorrow and the band informational meeting.  She's excited to take on the clarinet, but I really wanted a chance to visit with the band director.  I would've been nice to meet her teacher, too.  Fortunately, my parents are filling in because they're awesome.

The trees out front next to the parking area were removed on Friday afternoon, and the results are dramatic.  The entire look of our street is different, and you can see all the way to the end of the street.  The bad thing, though, is that we've lost all privacy.  The tree out front essentially blocked our house from the rest of the street, and our front grass rarely if ever saw the sun.  The tree also blocked out the street lamp, as well, so now we have a spotlight on our house all night long.  I don't think I'll ever have to use our porch lights again.  I sure won't miss the berries that fell all over my cars, and the bird droppings, but this is going to be an adjustment after ten years. 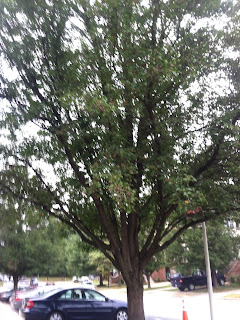 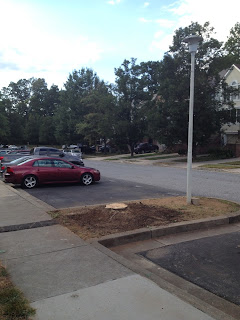 My daughter expressed a lot of interest in what occurred on 9/11 in 2001, so we watched several of the shows a few days ago that aired on the anniversary that I had Tivoed.  It was emotional.  A couple of moments really hit me hard.  My girl soaked it all in, and took her cues from me.  She asked a lot of questions and I gave her honest answers.  I shared with her what I experienced on that day, too, and how big a deal it was and continues to be.  She's a small little girl.

With all that said, I still get a bit nervous when I have to fly.  It's even harder this close to the anniversary, with all of it fresh in my mind.  I never liked flying before 9/11.  I didn't fly for the first time until I was 25 years old, so it's still a unique experience to me.  I have a routine when I fly, which includes a prayer asking for God's safety just before the plane takes off.  I also always fully pay attention to the flight attendants as they go through their pre-flight drills, and I'm very conscious of the sounds of the jet engines.  I don't relax until the plane hits cruising altitude.

Back and forth Steelers-Bengals game is still not helping my nerves.  Bengals winning again late in the 3rd quarter.  I'll be up for the entire game, unfortunately.  Because I take my football way too seriously.

Hope you all have a great evening!