Faithful Pup Scout became Playful Pup Scout this afternoon.  She found one of her old balls, and it was funny to watch her remember that the ball is equated to running around like crazy as we threw it around the room.  It was just like old times.  She was having fun, and daughter Melody was having just as much fun with her.  I loved seeing that.  We just don't have enough fun around here.

My parents came over yesterday and we all went out to Triadelphia Lake View (TLV) Farm to cut down our annual Christmas trees.  This is usually quite an exhausting exercise.  There is no such thing as a "perfect" Christmas tree (unless you go the artificial tree route, in which case it isn't actually a tree and doesn't count).  So looking for one that is the perfect size and shape is impossible, so you just accept a few flaws.  Maybe it has one bad side, or it might be a little thin in some areas.  Some are way too tall, but look great.  Unless you have a room with a 15-foot ceiling, it's just not going to work.  Still others look like bushes, not trees.  We always get a white pine, which means lots of needles as the tree dries out (and it always does, no matter how much water you feed it).  I think I still have needles in my living room carpet from three Christmas's ago.

Speaking of three Christmas's ago, we got a nice tree that year and set it up in our dining room.  We have several really good spots in our living room/dining room, and this was the first year we placed it in the dining room.  It was nice, since it was right next to the serving window to the kitchen, so we could see the tree from a several different angles.  About a week later, I noticed a very small small insect that looked a heck of a lot like a miniature praying mantis.  Upon closer examination, I realized that's what it was.  Soon, though, there were several of these little bugs wandering around the house, then there were a LOT of them.  They kind of minded themselves, and I was scared to just kill them since Mom always told me that this was illegal (it's not).  Anyway, I put two and two together and realized that the mantises had come in on the tree.  I found the nest near the lower part of the trunk.  I guess, once the tree had been brought into the house out of the cold, the mantises hatched and started to wander the house looking for food.  None of them ended up surviving, and I found the carcasses around the house for months afterwards. 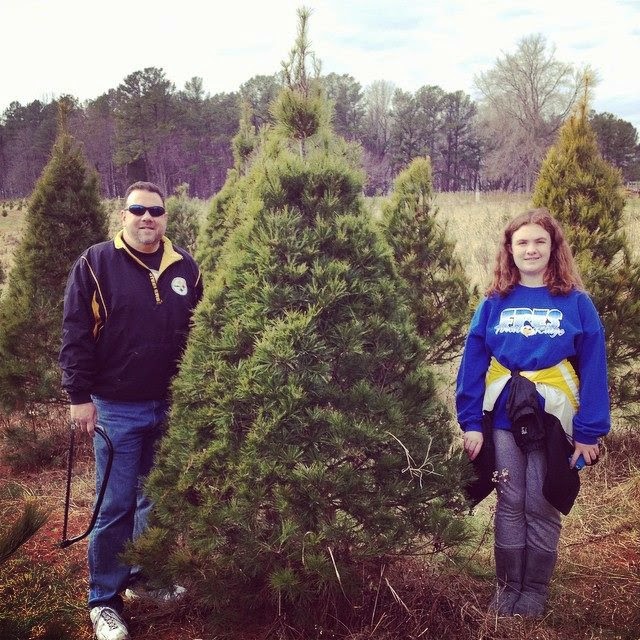 So we found a really nice tree, cut it down, threw into the back of my Jeep (along with my parent's tree), and we headed on home, over the river and through the woods.  If you haven't been out to the TLV Tree Farm, it's worth the drive.  It's in one of the most scenic parts of Howard County, so the drive is part of the fun.  Santa is there on weekends, as well, and they have lots of goodies for sale.  Check it out if you like cutting down your own Christmas Tree.

I've been waiting for a few months now for the health unit at my office to get a shipment of flu shots, and it hasn't happened yet.  I get one every year, and I truly believe they work.  I haven't gotten the flu in years.  This morning, I wasn't feeling great.  I actually didn't sleep well the last few nights, and have had some pretty bad congestion.  So sitting at my desk this morning, I was feeling uncomfortable.  Achy joints, congestion, cough, itchy eyes...I'm definitely coming down with something.  By the time we got home, I was feeling miserable.  We called off dinner with my in-laws, since I just wasn't up for it.  I had some good soup for dinner, instead, which was really the best thing for me.  This is really rotten timing, since I have a pretty important management summit meeting over the next several days, with several of my colleagues having flown in from Oklahoma City.  I can't miss it.  I hope to sleep well tonight, which may help.  Your prayers are appreciated.