About a month ago, I took a break from blogging.  I was frustrated by the self-perceived forced nature my writing had taken, which was itself a reflection of trying to blog daily for much of the past two years.  When I started this blog, it was as an outlet for my healing resulting from the unexpected death of my wife ten years ago.  I was in the midst of a lengthy period of grief and I felt like my writing would help me.  And it did.

I had been writing a diary/journal for quite a few years.  My grandfather, who I've written about several times here in this blog in the past, wrote a daily diary for over forty years, and I was privileged to be able to read every volume in their entirety in the years following the death of my grandparents in 1987.  He wrote about his day-to-day routines, noting important (to him) dates, like the births of his children (my Mom!) and grandchildren, including my own, as well as historic events as they happened, as well as what he ate for dinner just about every day.  It was so cool to read about things from his perspective that I remembered from my own childhood, like birthday parties and Christmas, and he certainly inspired me to take up writing in much the same way.  Instead of a diary format, however, I did more journaling, which resulted in some pretty lengthy soul-searching and teen angst resulting from lost, unrequited loves, loneliness, and the typical youth-oriented situations I found myself in, stuff I will likely never re-read or look at again.

After marrying, my writing morphed into the daily-diary format my grandfather adopted, as it better suited my lifestyle at the time.  I've always been interested in discovering my intended audience with regard to my writing, and during this period of my life, I realized that my wife was my audience (though I think I knew that, should I ever have children, they would become my audience).  I was writing to her.  The diaries become my "record" of our relationship, and while I'm sure Teresa looked through them and read them occasionally, since I never kept them hidden, she never commented on what I wrote.  We kept a separate book containing details of our numerous trips and vacations, and she contributed to those writings.  I loved reading her writing, which was so much better than anything I ever wrote, and I secretly wished she had written much more than she did.  Anyway, it was my job to document our marriage.  Never was there any thought that my wonderful wife, Teresa, would die before me, and when that happened, I stopped writing completely.  Since she was who I was writing to, there was no reason to keep writing.

Within a year of her death, though, the itch to write returned, but it was in the journal format I had begun writing in during my teen years.  It was better suited to the mind frame I was in at the time, which consisted of intense feelings of loneliness and sadness.  I was hardly writing regularly, and in fact I only wrote a few times each year over the next several years.  But it was a necessary part of the healing process, at least for me, though I was uncertain who my audience was during this time of my life.  I didn't (and still don't) feel like these were the writings I would want my daughter to see, though I imagine they are somewhat harmless and will be available to her after I'm dead and gone.

It was also around this time that I discovered blogging.  I read a lot of blogs, just sort of randomly, and I got the itch to go in this direction, looking at it as the opportunity to document in a more permanent way my journal through healing.  While I didn't intend for my blogging to ever actually reach an audience, I felt like it could, and maybe even help me find those who were going through something similar.  It was short-lived.  I wrote two entries in August 2008, and one in February 2009.  I took a long break, then recapped the night of Teresa's death in a post in October 2010, and didn't post again for almost two years.

My daughter, Melody, began attending the Grace Adventures Day Camp at our church, Grace Community, for a bunch of weeks each summer during this time, and the wonderful young women who managed and worked at the camp as counselors had a profound affect on her, and in turn, me.  The caring they showed towards her, which was a reflection of Christ's love through them, was exactly what she needed in her life as she began to mature into a beautiful young girl, and it is something that I repeatedly stress as an important part of my own healing.  The knowledge that my daughter was getting the attention she needed, spiritually as well as relationally, and at such an influential age, was such a relief to me, and can never be repaid.  Thank yous, especially, to Misses Michelle, Amy, Cree, Grace, Sarah, Erin, and Caitlin, as well as Kristen and so many others.  You all will never know just what kind of an impact you all had on Melody and me.  I also discovered that several of these young women wrote wonderful blogs, and it was at this time that they also inspired me to return to my own blog and begin writing again.

And the blog took off.  While my topics were all over the place, I eventually discovered my "voice" and I found God leading me in the words I typed.  I never set out to write about a particular topic.  I was always inspired at the moment I began typing each day.  Writing is a very selfish act, but sharing my writing was something else.  I didn't write expecting to develop an audience.  I just wanted to write about anything that was on my heart at that moment.  This continued until recently, when the effort to write daily took its toll, and I was writing just to write.  I needed a break.  At around this time, one of the pastors at Grace, Mitchel, challenged us to examine how social media was affecting our lives, and I was convicted.  I had been writing regularly practically every day for a few years, and I realized that it was taking time away from my daughter.  Between Facebook, Twitter, Instagram, blogging, emails, and work, I was completely distracted every afternoon until I went to bed in the evening.  I needed to make a change.  And I needed to figure out if this blog was going to be a part of this change.

The past month was wonderful, full of family moments and enjoying the Christmas season.  God has been present throughout.  I was especially cognizant of the free time that resulted from the break from writing.  I had also dropped Facebook during this same period, and that was even more profound.  While much of my family (especially the grandparents) was disappointed that I wasn't posting about what my daughter and I were doing, I enjoyed being away from the politics, pessimism, religion, sex, commercialism, and overall news that isn't newsworthy that pervades much of what Facebook has become.  I prefer my FB to be about staying in touch with family and friends, and it hasn't been that in several years.

Going forward, I think I'll be staying away from FB, but the itch to begin writing has been too great.  So, beginning tonight, on New Year's Eve, I am returning to the blog.  I make no apologies for what you may see here.  My goal is to write positive posts that are worth reading, while staying away from the negativism found on much of the Internet.  I am a Christ-follower, and because that is who I am, my writing will take on a Christ-centered feel.  My intent is to focus on my daughter and me, our day-to-day stuff, including our big trips and road trips, roller coaster rides, and family.

Thanks for reading and joining with me on this ride.  Best wishes and blessings in the New Year! 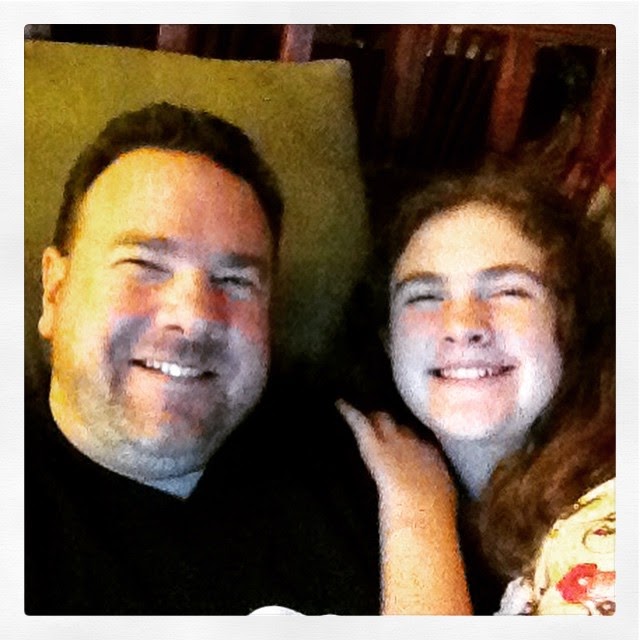