I love chili!  It's one of my favorite dishes, and if I may brag just a bit, I make a pretty good chili recipe.  Growing up, I can really only remember trying a few different chilis, my grandfather's and my mother's.  Pap made a unique chili that I tried many times over the years but really didn't resemble traditional chili as much as stew, since he put just about anything he found in the refrigerator into the pot.  Mom didn't experiment much, so her chili was pretty basic, though she always added beans to hers.  When I started making my own, I went without beans, and while I experiment with my recipe by adding many different kinds of meats, the basics have been the same, with seasonings and veggies being pretty consistent.  I'd share them, but then you'd know what's in it, and I'd have to send my friend Guido to visit you.  And it won't be a social call.

My recipe was inspired by a chili mug I found on Route 66, which had the recipe printed and embossed on the side of the mug. (My memory is a little hazy on exactly where I purchased the mug.  It was either at the Big Texan Steak Ranch in Amarillo, TX, home of the 72 ounce steak, or the Route 66 landmark Jack Rabbit Trading Post in Joseph City, AZ. I bought a lot of souvenirs on that trip and they all kind of run together.)  I used this as the basis of my own chili, though as I've tweaked it, it doesn't much resemble the recipe on the mug.  I also started experimenting with ingredients and now I just go by "feel" rather than specific measurements.

My chili is very popular with those who have tried it.  My Mom asks me to make it regularly for family parties, though my father is never able to eat it because it's too spicy.  He can't handle anything spicy.  My uncle begged me for the recipe since, as he put it, his wife just can't make edible chili.  My former boss loves it, too, and he gets mad at me if I've made a batch and forgotten to bring in a sample for him.

My office decided to combine several of our pastimes into one big event, so our annual Holiday (Christmas) party was turned into a Chili Cook-off.  As a result we had to change the format of the cook-off to allow for a significant increase in participants.  My current boss insisted that we bring together all of the different parts of our organization for one big party, which meant well over two hundred people.  Our cook-offs in the past were for only 75, so this meant a lot of work for those who put together the party.  It worked, though.  The day of the party, we had 20 pots of chili entered, and to supplement the food we had the Urban Barbecue Co. cater.  It was a big hit!

We put together a judging panel for the chili instead of allowing everyone to vote, as we used to do, though we did have a "People's Choice" award.  The judging panel had four different categories for the chili:  Spiciest, Best Vegetarian, Best Non-Traditional, and Best Overall.  I submitted my chili recipe again, the fifth year I've entered.  I was fortunate to win twice before under the old format.  This year's batch included hot Italian sausage mixed with lean ground beef as my main ingredients.  The judging panel made up of ten employees did the taste-testing prior to the party, and the votes were counted while the food was served.  I tried all 20, and, as usual, every one of them was unique.  Everyone does such a great job, and the cook-off always ends up being a good time.  While I really liked my own chili, there were a few that were off the charts.  One guy used "ghost pepper" to spice up his chili, and it was far and away the hottest chili I had ever tried.

Early returns didn't sound good for my chili.  One of my buddies, who was on the voting panel, said that he didn't care for the chili with the sausage, commenting that sausage didn't belong in chili.  I guess he's a bit of a purist.  Anyway, the results were tallied and my chili tied for Best Overall with two others, one of which was my favorite.  His was also voted as the People's Choice, so he was crowned overall champion.  But I was happy to continue calling my own an award-winning chili.  In the days following the chili cook-off, everyone was talking about it.  Unfortunately, the talk was all about what the chili was doing to their digestive system.  Because, as you've likely heard, chili tends to cause a rather....explosive reaction. 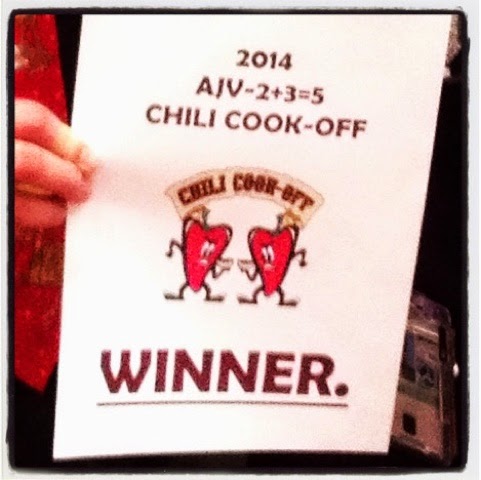