Give The Band A Hand

Thursday night was a big, important, fantastic, incredible, noteworthy, marvelous, wonderful, sensational, outstanding, super, excellent, dazzling, breath-taking, really good show.  My daughter, in her second year playing the clarinet in the school band, participated in the band's Winter Concert performance at her school.  It's something she has been excited about and I've been looking forward to for months. 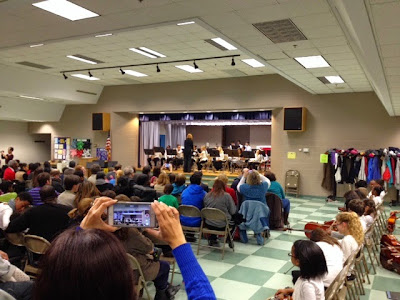 When I was in fifth grade 30-some years ago, I also played clarinet, and I was preparing for my first performance.  It was really exciting.  So exciting, in fact, that I threw up backstage right before the performance, much to my parent's chagrin.  But the show went on, and I went on to have a very enjoyable and fulfilling musical career, one that led to some consideration of a career as a professional musician.  Though that didn't happen when I realized I really wasn't that good, and it would require a great deal of work that I just wasn't committed to doing, I had a great deal of fun.  And being a musician was a big part of my high school identity, which was so important to my self esteem and social environment.  My love of jazz also came into play when I started playing the alto saxophone and joined the high school jazz band, probably the pinnacle of my musical career.  I also played with an ensemble at my church, and with the Mighty Sound of Maryland at the University of Maryland, which in itself was an incredible part of my social development at a school the size of Maryland.  I owe a huge debt of gratitude to the music teachers and band directors that have been a part of my life over the years, as my confidence was certainly enhanced by performing in the bands I played with, as well as my many solo performances.

This wasn't Melody's first concert, but it was still exciting because I could see the confidence exuding from her that may not have been there at her first concert.  She was confident because she was an experienced musician, and she loved the music that the band was playing.  She also has a wonderful, caring, attentive, patient, understanding, and experienced music director (and you HAVE to be all of these things to be an elementary school music teacher!).  Mrs. Curry also has a delightful sense of humor, and I can't emphasize how important that is for someone in her position.  I can tell you, THIS parent appreciates that.

Melody had a warm-up performance earlier in the day at school that was put on for the student body, so she was already dressed for the evening performance.  After an emergency spot cleaning following an incident involving Melody's brand-new white shirt and cherry jell-o that was alleviated at the last minute, we rushed over to the school.

Unfortunately for us, we arrived after a majority of the folks had arrived, and for the second time in the past year, it appears the school completely underestimated just how many parents and friends would be attending the concert, as every chair had a body in it, and there were just as many people standing in the back and sides of the multi-purpose room.  On top of that, and just as unfortunate, tempers were short as everyone who entered the room and saw the standing room only crowd exhibited their disappointment that they would not be able to sit down.  With all of the bodies in the room, it got very warm very fast, and as people filtered in, there was no where for them to go except to stand in front of the people already standing in the back of the room.  It was uncomfortable, to say the least.

The fourth and fifth grade orchestras performed their portions of the concert first, and they were very good.  But it quickly became apparent that there was one more disappointment.  I only wish some members of the audience understood the etiquette associated with attending a concert, even one involving elementary school students.  It is really impolite to talk throughout the performance, as many seemed to be doing.  I decided to whisper to the folks standing in front of me during a break between two songs to please not speak while the music was being performed, but they chose to ignore me.

Closing out the concert was the Fifth Grade Band, and I was excited to hear Melody's performance.  And it was great, as elementary school bands go.  The band performed "Down The Field March", "Crown of Majesty", "On Caribbean Shores", and "25 Or 6 To 4", which brought the house down.  You could certainly see and hear the pride of musicianship come through during the performance, as the kids really enjoyed the music they were performing.  Credit Mrs. Curry, the director, for choosing music that the kids like to play.

After a rousing ovation by the audience, and the room was cleaned up by the school's fantastic custodial staff and many of the parents, I had a quick minute with Mrs. Curry to thank her, and she was so complimentary of the students, and had some kind things to say about Melody.  It was so nice, and I am so thankful that Melody has such a wonderful teacher and music director.  I know she is fostering in Melody a love of music and performance that is likely to carry her forward into a strong musical career. 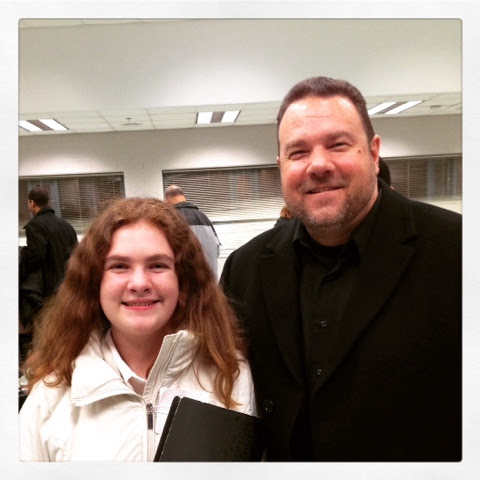 Music education is so important to our children, and I can only hope officials in the county's school system understand this and will not diminish this importance with unnecessary cuts in budget that impact this part of the student's education.  I know from experience just how beneficial music education can be, and I can only hope that Melody will have the same opportunities that I had as a student.  It isn't just learning to play an instrument.  It's institutional, educational, career-enhancing, and will impact a student's self-esteem and social standing.  I don't know how different my own student career would have been without music and being in the bands, but I'm sure it would not have been as well-rounded and fulfilling.

Support music education in Howard County schools, and throughout this country's school systems.  It is that important.