What I Did On My Christmas Break, Part 2

Melody and I had a great Christmas, and since we had a lengthy break, the longest away from the office for me in several years, we took the time to really enjoy it and relax.  After a wonderful Christmas Day with my whole family, we spent a second night at my parent's home and had fun watching new DVDs and playing games.  Melody in particular loved using her new Karaoke machine.  It has a bluetooth feature allowing her to use her iPhone to access youTube videos and play them through the speakers.  I caught her strumming her new guitar every so often, as well, which is really cool.  She hadn't asked for any of the gifts she got from "Santa", and I wrestled with whether she would be happy with these gifts.  It made me happy to see her happy.  After the late night on Christmas Eve, I practically collapsed at around 9 p.m. and fell asleep to the sounds of Melody's angelic singing. 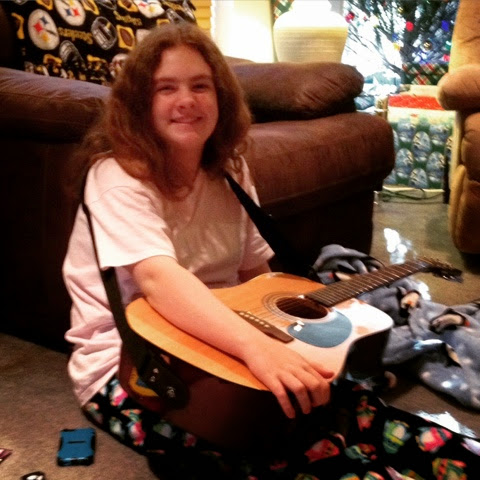 Everyone was up fairly early on Friday, and we had another fun day with our gifts and the togetherness of family.  I had gotten dressed early, and had begun collecting our stuff to take home.  Melody dragged her feet, though, and we ended up not getting away.  We watched the new GODZILLA movie on DVD in the afternoon, and about halfway through it, my cousin Vicki stopped by with my Aunt Linda.  They sat around and chatted with us for a few hours.  It was getting later and later, and since Melody still wasn't dressed, Dad suggested that we just spend another night with them.  I was anxious to get home, but he talked me into it.  We stayed another night.  It was a repeat of the previous night, though, and I was asleep before ten, after watching the rest of GODZILLA.

Saturday morning was spent finally getting my little girl out of her pajamas after two days in them.  We got dressed and, after our third ham sandwich in as many days, we loaded up our gifts into our Jeep and we headed for home.  We quickly unloaded everything and tried to find homes for all of our gifts.  I still have gifts from last year that are sitting around.  We also revisited all of the gifts that my in-laws had given us on Christmas Eve, still packed in the boxes we had them in when I dropped them off.  We had already missed church that night, so we got comfortable and cozy for the night.  We stayed up fairly late, catching up on our Tivo recordings while we enjoyed being home.

Sunday was a quiet, do-nothing kind of day.  I watched a lot of football, and it felt good to be lazy.  We spent some time planning our getaway for the next day, a little trip to satisfy my wanderlust, and Melody continued to enjoy her new gifts.  The Big Game began that evening, with my Pittsburgh Steelers taking on the Cincinnati Bengals.  The winner would take the AFC North Division crown, as well as the #3 seed in the playoffs.  And the Steelers took the victory.  It felt good.  Little did I know it would be the last bit of football enjoyment of the season.

We had been planning a trip to Williamsburg, VA, for a few weeks, and we were looking forward to going to Christmas Town at Busch Gardens, but we were kind of dreading the drive down to Williamsburg, and the potential rainy weather that was forecast.  So we totally revamped our trip plans.  We started out by having a very nice lunch with my in-laws at the IHOP in Mt. Airy, MD.  It was nice to see them and reflect on our Christmas.  I know they have a hard time with Christmas Day.  They struggle during the Holidays with the loss of their only child, my wife, Teresa, who passed away in April 2004.  I know they love their time with Melody on Christmas Eve, but they really try to get away from home on Christmas Day.  Melody's great-grandmother is still alive and living at a nursing home nearby, and they usually spend some time with her.  So we had a nice meal, then we said our goodbyes and headed west and north.

After an hour of driving, we arrived at our first destination:  Whitetail Resort near Mercersburg, PA.  We had planned to go to Liberty, which is closer, but they had no snow, not even man-made snow.  Whitetail was a bit further west, and while they didn't have any natural snow, but had plenty of the man-made stuff.  We don't ski.  I had a really bad skiing experience about 20 years ago that I don't like to talk about (though I think I may have blogged about it a few years ago).  We like to go snow tubing!  Tubing is very much like sledding, except steeper and faster than anything I ever did when I was a kid.  The place was very crowded, but we had a blast!  We had a two-hour pass from 4 p.m. to 6 p.m., and as the sun went down, it got colder and faster.  When our session was over, we headed back to our Jeep and proceeded to our next destination. 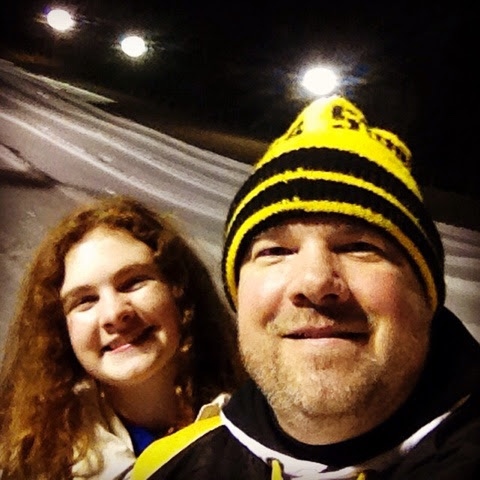 When we travel, we have a personal rule about not eating at chains.  Sometimes we don't have a choice, however.  It was after 7 p.m. and we were struggling to find a place to eat dinner.  Many places were closed, and we were really in the middle of nowhere.  So we ended up finding a Bob Evans just off of I-81, and we had a very pleasant meal with a bunch of very cheery employees.  As we began to eat, and elderly couple entered and as they passed our table, the woman leaned down and told me that I must be a very smart man...She said she was a big Pittsburgh Steelers fan and I was wearing a Steelers shirt, and we talked about the great victory the night before.  She and her husband were driving south to Florida after visiting their family in the Pittsburgh area for the Holidays.  Steeler Nation is such a wonderful country!

After eating, we continued north and arrived at our next destination at around 9:30:  Hershey, PA!  I'll share the rest of our trip in my next post.  For now, have a great evening, everyone!  Enjoy the snow, if we get any...