The flu found me several nights ago.  I received a flu shot at the end of November, but I've been hearing that the shot didn't cover the strain that's floating around getting everyone sick.  And that's unfortunate.  My daughter, Melody, also seems to have it, and she was showing signs several days earlier than me.  She did not receive the flu shot (which was my fault... I forgot to send in the permission slip to the school when they gave out the flu mist a few months ago).  It's interesting to see just how much worse her symptoms are compared to mine.  I hate for her to miss school, but she needed to be home.  My sister took her over to my parent's place on Tuesday morning.  I attempted to work on Tuesday, but after a case of the chills and sweats, and a dizzy spell, I went home and have been camped out on the couch ever since.  Melody's symptoms have been more cold-like, with severe congestion and cough, along with a mild fever.  My symptoms are fever, dizziness, congestion and cough, though much less severe.

Because I went to work on Tuesday, I was able to clear out my schedule a bit, though I still had to call into a meeting yesterday afternoon from the couch.  I wish I could attend all of my meetings from the couch.  As it is, being home today caused me to become a little stir crazy.  As bad as I feel, I still don't seem to know how to relax.  All I can think about is everything I'm missing at work, even though I know my employees are more than able to carry on without me, at least for a few days.  I also hate disappointing my boss, who I know would prefer me to be at work, even if she tells me to take it easy and get well.  But I guess it's natural to feel that way.  So to pass the time, I read about a movie that was just released, called ATTICUS INSTITUTE, and I downloaded it and watched it.  And it spooked me, like all scary movies seem to do.  While I watched it, I sorted my daughter's clothes, which was a task I wouldn't wish on anyone else.  If you like scary movies, ATTICUS INSTITUTE is probably a little tame.  The director called it "creepy", and it was indeed that.  If you like to sort clothing, then I should invite you over and you can have fun with that.

The one good thing about being home today was watching the snow fall.  It was a beautiful snow, and as snow lovers know, it can change one's entire outlook.  That's the effect it has on me.  While the snow was untimely, with the impact it had on the afternoon's rush hour and kids walking home from school, which also necessitated me having to go out and shovel the walk and dig out my Jeep despite how rotten I was feeling, as well as having to drive over to the school to pick up Melody, I enjoyed watching it fall out the back window, with the stand of trees behind our neighborhood providing a beautiful backdrop. 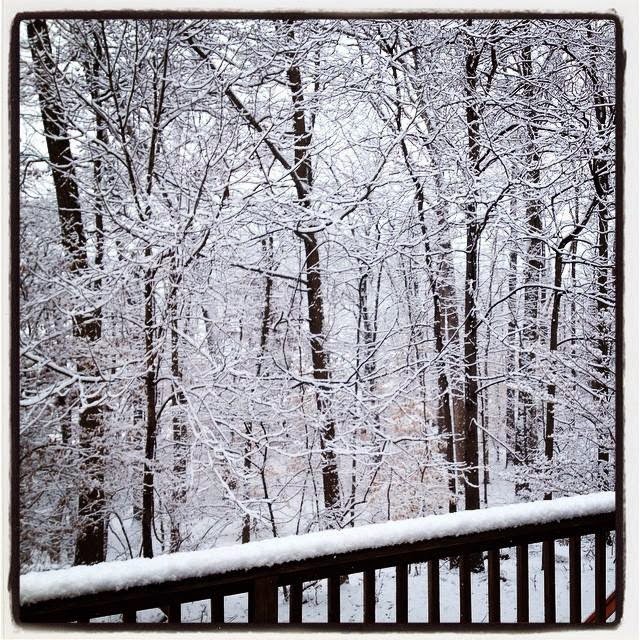 Sick days always seem like a lame way to miss a day of work.  Sitting at home worrying about being at work probably isn't the way to go, either.  But if we treat a sick day as an opportunity to take care of oneself, by resting and relaxing, and not worrying about the things you can't control, then you're doing the right thing.  It took a day and a half for me to finally realize it.  I'll be home one more day, mostly because it never pays to rush back (I tend to regress when I do), but also because it's the smart thing to do.  I have no meetings to go to tomorrow, and my employees certainly have things covered.  My boss really is understanding, even if I don't feel like she is. And I might actually get into the right frame of mind and relax a little bit, something I couldn't seem to do until now.

Have a great evening, everyone!
Posted by Eric Freed at 8:48 PM