Not too long after the school year started, my daughter Melody brought home a form from her teacher asking for volunteers for Career Day.  Melody asked me to please please please do it!  I didn't have a whole lot of interest or talent for it, but after some more begging, I threw my hat in the ring, filled out the form saying I was interested, and returned it to Melody's teacher.  I promptly forgot all about it.

Fast-forward to last month and I received an email from Melody's teacher informing me that Career Day was coming up, and that I should provide my information to her.  I was in a slight panic.  I really don't like to get up in front of an audience, whether for fun or as a part of my job, though I have to do the latter regularly and can do it as needed.  I just don't enjoy it.  I am and always have preferred to be a background guy.  But in this case, I had made a commitment to the school and Melody's teacher, so I agreed to do it.  It was scheduled for January 9th.

As an aside, this is the end of the calendar year for using leave in the Federal Government.  Since employees can only carry over 240 hours of annual leave, anything over that has to be used by this week, or it is lost.  So, in my scheduling of my leave approaching the end of the leave year, it worked out perfectly to use my last day of use-or-lose for yesterday, Career Day.  Except, after telling my boss about Career Day, she immediately pointed out that I could use duty time for the hours I put in for Career Day, which ended up being about 3 hours.  So I would end up losing those 3 hours as leave.  No big deal, really.  But then it snowed on Tuesday, and schools were closed, and I ended up taking off to be with my daughter.  As a result, I used more than my use-or-lose amount, and will end up carrying over 235 hours instead of the maximum 240.  First World problems, I know. 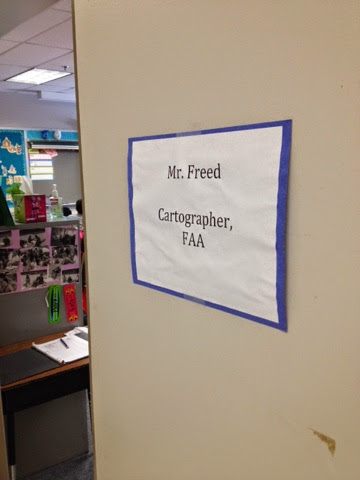 Anyway, yesterday was Career Day.  I'm a cartographer by trade, and that's what I wanted to focus on, but as an employee at the Federal Aviation Administration (FAA), the work that we do in providing aeronautical charts and publications to the aviation community is very interesting, in my opinion, and I wanted to mention that, as well.

I arrived at the school about 30 minutes before they opened the doors to the students (though I brought my daughter with me).  The school provided donuts and coffee to the parents who were there (there were six of us), and we had a chance to talk a little bit with each other.  One was a fireman, which we all agreed was awesome and would likely be the favorite of the students.  He had brought an axe, as well as a few other tools of the trade, and we joked that he probably wouldn't even need to say anything.  The kids would likely "Ooooh" and "Aaaaah" while he would just stand there looking cool.  Another father worked for Under Armour, which is kind of cool, particularly for those into sports apparel.  There was a mother who worked for the National Security Agency as a "Code-Breaker", which is really cool, in my opinion.  I wished I could sit in and listen to her.  Another mother was a Construction Project Manager, and I thought that was interesting, as well.  Finally, there was a mother who was an Administrative professor for a local agency.

We had four sessions of approximately 20 minutes each, and the students would rotate from classroom to classroom so hear our presentations.  My daughter came to my first session, and it was nice to have a familiar face.  Fifth grade is an interesting age.  The kids are on the verge of being teenagers, and I know from over ten years of experience as a church youth counselor that it can be very difficult to hold this age group's attention.  I wasn't going to be able to just stand up and talk.  I needed to have a hook.  My job didn't require me to hold an axe and look cool.  In fact, my workday consists of lots of boring meetings now that I'm on the management side, though I certainly wasn't going to talk about that aspect of my career.  Fortunately, several years ago we had produced a professionally-made 3-minute video of how a Visual Flight Rules aeronautical chart is put together and used by a pilot, which was just gimmicky enough that the kids would, hopefully, find something to take away.  And, if that didn't do the trick, I would give them an actual aeronautical chart.

So a group of about 20 kids filtered in and I jumped right in to my presentation.  I told them about how there are maps all around us, everywhere!  In fact, right there in the classroom, there was a big wall map in the front of the room, another of the 13 original American colonies, and a giant globe.  I proceeded to tell them that there were maps in phone books, at subway stations, in road atlases, weather maps, books, brochures, amusement parks, stadiums, arenas, shopping centers, video games, GPSs, smart phone apps, and even sheet music!  (In my opinion, sheet music is a map for musicians.)  And, as a result, it is absolutely imperative that one has the skills necessary to view, read, and understand a map.  I told them a little about my own interest in maps, which was fueled at an early age by subscriptions to National Geographic magazine, planning family road trips, playing board games like RISK and AXIS AND ALLIES, inventing my own games using maps, and even my fascination with Japanese kaiju (giant monster) movies and super hero shows like GODZILLA and ULTRAMAN (which used intricately detailed models of actual cities, which are in their own way a form of 3-D maps).  As I got older, I started exploring on my own old road maps and atlases, such as the one of Prince George's County from 1873, which I used to drive all over the county to search out historic locations.  Then, later, my fascination with Route 66 led to my huge road trip across the United States driving down the historic route.  I discovered geography and cartography courses at the University of Maryland, and became a Geography major, which led to my job and career in aeronautical charting at the National Oceanic and Atmospheric Administration (NOAA), and then the FAA.  I started at NOAA as a summer intern, essentially, working a a Cartographic Aide, then Technician, before getting hired permanently as a professional cartographer in Visual Charting.  I then showed the 3-minute video, and spent the remaining time exploring with the students the charts I had brought for them.  I also talked to them about how the art of cartography has been modernized in recent years, and digital maps are now the way of the future.  Before I knew it, my time was up, and the next group of kids were brought in.

The second, third, and fourth sessions went even better, and were more polished as I became more familiar with my delivery and expectations, and could adjust my topic to what interested them most by their reactions.  Upon completing the sessions, I refused lots of positive comments from the teachers who sat in on my presentation with the students, and that was really nice to hear.  And that was it.

Melody came over to me as I was cleaning up and gave me a hug and kiss and told me how proud she was of me, and she thanked me for coming.  I thanked her, and said goodbye, and I headed out of the school and back home.  When I picked up Melody after school, she said all of her friends who came to my session thought I was great, so that was a nice bit a feedback.

All in all, Career Day was a great experience.  My hope is that at least a few of the kids might find interest in the field of cartography, and might look at a career in the world of maps.