What I Did On My Christmas Break, Part 1 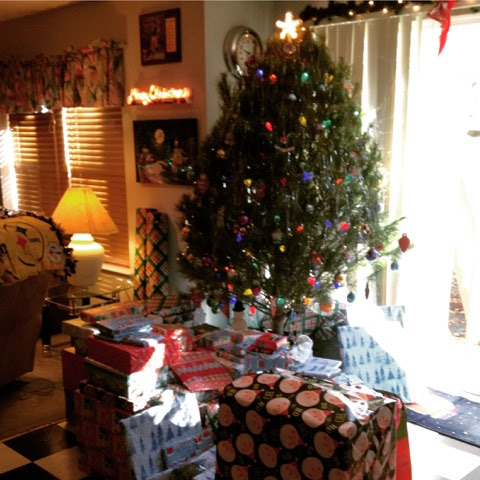 Wow, what a nice break!  The 11 days off constituted my longest consecutive time off from work in several years, and it was much needed and very much appreciated.  I'm so fortunate to have a leadership team under me that can handle the day to day work in a professional manner that allows me to not worry when I'm not there.  It would be egotistical of me to state they couldn't handle it without me, but I truly mean it when I say they can do it.

One thing that is necessary when I'm away from the office is to go to radio silence.  What I mean by this is that I refuse to check emails when I'm out.  My employees know how to reach me.  They have my Blackberry and my personal cell phone numbers, and I encourage them to call or text if they need me for any reason, or if there's an emergency I need to know about.  And they have called me, many times.  However, I don't check on them.  I deal with an immense amount of stress that has impacted my health, and it's for that reason that I stay away.  It's something that I wrestle with, because our society in America is one where we are expected to work our butts off to be successful in our jobs, all while knowing that it's exactly this kind of thing that impacts our health in a negative way.  So I consciously avoid contact with the office while I'm out, and I'm better off as a result.  Life is too short, as my wife's death showed me.

So, after leaving the office on Christmas Eve, I rushed to the store for a couple of last-minute items, then went home.  I had intended to go to one of the services at my church, Grace Community, but I ran out of time.  Melody, my daughter, was already with my in-laws, so I was looking forward to seeing her that evening.  I prepared all of the gifts for the night (and Christmas morning), then headed out for the Christmas Eve service at First Baptist of Damascus, where my father-in-law is the pastor.  It was a foggy night and driving was a bit dicey, especially on the back roads between Laurel and Damascus.  But I made it with plenty of time to spare.

Because of renovations to the front of the church, the services were held in the all-purpose room in the lower part of the building, and this was the first year they had to have two services due to the smaller size of the room.  My father-in-law delivered a great message, and Melody sang "Happy Birthday, Jesus" as she did last year.  As her gushing father, I thought she was awesome!  I wish Melody had more confidence in herself.  She avoids these kinds of things because she doesn't think she's very good, but she really is.  She received so many compliments, and still she thinks she wasn't good.  But it's so apparent she likes singing.

After the service, we all reconvened at the parsonage, where my in-laws live.  My parents had joined us for the service, as well as my sister, Aunt G, and my wife's Aunt Jody.  We had a very nice dinner, then spent the next few hours opening gifts and enjoying each other's company.  I'm so thankful for the opportunity to have everyone together like this each year since it allows me to spend Christmas Day with my immediate family, and gives my in-laws the chance to spend Christmas Eve with their only grandchild.  We said goodnight, and Melody and Aunt G rode home with Mom & Dad, while I rushed back home to get the next round of gifts and pick up Faithful Pup Scout, who, aside from a few hours that afternoon, had been at home alone for most of the day.  After changing clothes and getting a cup of coffee, I headed over to Mom & Dad's place and arrived at about 1 a.m.

I should mention that Melody and I had a serious one-on-one discussion a few weeks prior about the true meaning of Christmas, and she was made aware of the story of Santa Claus.  It was a conversation I wasn't looking forward to, and one I hadn't planned on having, at least as of yet, but the timing was good and kind of necessary given her direct questions.  I don't think she was as surprised as I expected her to be, but, at 11 years old, she is pretty smart.  I told her it wouldn't change anything.  She was still going to get presents, and she was still going to be surprised.  One question she had amused me, though:  She asked if it was true that I had to get up at 4 a.m. to get things ready for Christmas morning.  I told her it wasn't....that 4 a.m. was what time I sometimes ended up going to bed!

As she's gotten older, prep time has actually decreased since I have less complicated presents that have to be put together.  This year was a good example of that.  She has always received three presents on Christmas morning from Santa, just like the little baby Jesus received three gifts from the Three Wise Men on that first Christmas.  This was something that my wife and I determined in order for us not to overwhelm Melody, and to exercise restraint.  This also allowed us to give her presents from us, and the grandparents all got credit for giving her presents, too.  Melody's three gifts this year were a guitar, a Karaoke machine, and a bunch of Legos (which I wouldn't have to put together...that would be her job). 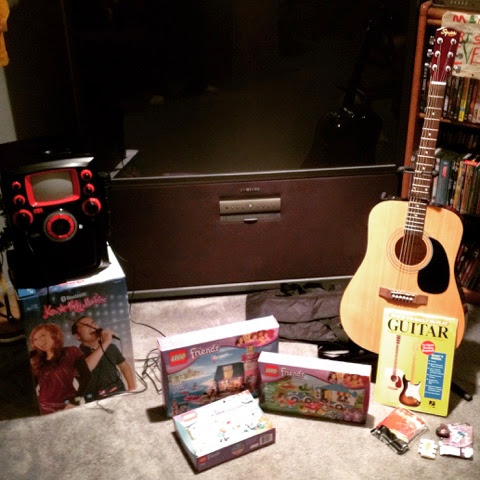 Christmas morning was wonderful.  In addition to Mom & Dad and Aunt G, Uncle D and his fiancee Erica all joined us.  We had a nice breakfast and finally went down to the basement for Melody's Christmas and the opening of gifts, which, with this family, usually takes a good four hours.  And we cut way back this year.  There were lots of surprises and wonderful gifts both given and received.  Everyone was happy, and we reflected on past Christmases and those who were no longer with us.  The meaning of the season was literally right there for all of us to experience.  And we thanked God for His blessings.

Have a great evening, everyone.  I'll share some more about our nice vacation in the days ahead.