The Dragon Outside My Window

After four hours of work my eyes had to rest,
So I glanced out the window and looked for some zest.
*
My office has an incredible view,
A window that looks out at a wildlife zoo.
*
There are trees here and there, and a bench to sit on,
And a cool little pond that reflects the new dawn.
*
At times it's so easy to forget where I'm at,
Downtown in the city, where paved ground is flat.

I adjusted my gaze to a spot just above;
A slight movement of something...a black mourning dove?
**
No, it was much darker, a shadowy form;
This wasn't even close to what fits my norm...
**
I rose from my desk for a closer look.
Were my eyes playing tricks?  Was this out of a book?
**
The object was something that could easily fly;
It had wings and six legs and two very big eyes.

It's form was so dark, as black as the night.
I rubbed my own eyes, surprised by the sight.
***
No fear did I have, though one might think that's some feat,
Especially when I thought of what it might like to eat.
***
I thought to myself, "How unusual, that...
"It looks a whole lot like a vampire bat!"
***
I held my breath, not sure if he'd go;
Its wings moved a bit, so I stepped back for the show.

The creature was facing away from my view;
It would be fine with me if it flew into the blue.
****
All of a sudden, with nary a care,
The creature took flight and rose into the air.
****
I watched as it flew off into a dark cloud.
I heard passersby point and their screams were so loud.
****
As God promised Noah, with a sky full of rainbow,
My sky held the dragon outside my window... 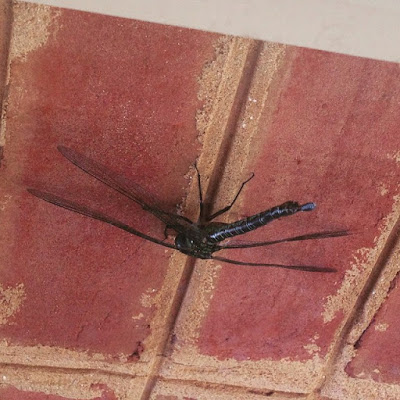