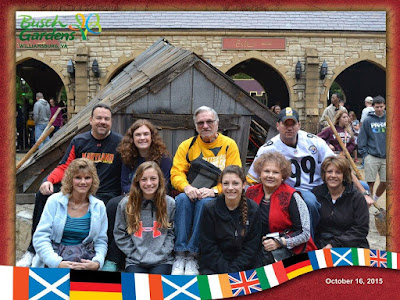 Just about every year since I was a youngster my family and I have traveled to Williamsburg, VA, and visited Busch Gardens, one of the nicest theme parks in the world.  We go not just because we love the roller coasters, which are all world class, but also because it is so beautiful, the food is fantastic, the employees are friendly, and the setting is so relaxing.  Last Friday was one of those trips, and my daughter Melody and I, along with my parents, my sister, and my brother and his family, had a very nice time.  But it wasn't great.  Like all businesses, and Busch Gardens is a business, they want to make money.  In the Fall, the park is transformed for Howl-o-scream, their Halloween "celebration," and this is where Busch Gardens has changed from family-centric to anything goes.  And that isn't a good thing...for families.

We arrived in Williamsburg on Thursday evening after a hectic drive.  I left work a few hours early to get a jump on rush hour, but it became clear that the best plans don't always work out the way we want them to.  Hitting the road at 3:30, we met heavy traffic at every turn.  I-95 south out of Howard County usually isn't too bad in the afternoon, but traffic was already barely moving.  I decided to work my way over to US 1, but then decided to take Powder Mill Road across the Agricultural Research Center, eventually cutting over to Route 450.  We jumped on the Beltway here, and crawled pretty much all the way to Route 4, where we bailed and cut across towards 301 south.  Traffic in Brandywine was terrible, so we again took back roads around Waldorf.  We made it to La Plata at about 5:45.  Mom, Dad, and sister Angie had stopped at the Texas Roadhouse in La Plata for dinner, and we were able to join them just as they ordered their food. 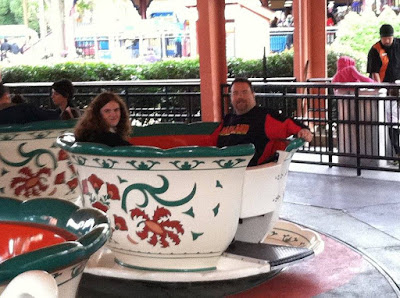 Melody wanted to ride with them, so I drove alone in our Jeep the rest of the way to Williamsburg.  It was smooth sailing all the way down 301 into Virginia, and at Bowling Green, we took Route 207 to I-95.  I-95 is like a race track, and after some white knuckle driving, we took I-295 to I-64 towards the Tidewater area.  After about 5 minutes, traffic screeched to a halt:  road construction.  For the next 30 minutes, we crawled.  Then it cleared up and we had no problems the rest of the way.  We arrived at our hotel at 9 p.m.  Our typical three hour trip became well over five.  I was exhausted, and we quickly checked in, sorted out our room assignments (Mom & Dad, Melody & Angie, and me, with my brother joining me on Friday night), and went to bed.

Our hotel on this trip was a very well-regarded EconoLodge that we had stayed in the past.  It's old, but clean and decent, and we actually got to know the owner and his family from our previous trips.  I had stopped staying here a few years ago because, frankly, there are much better, more modern places to stay nearby, though not necessarily as inexpensive.  But because everyone is on a budget, we agreed that this would be a good place for us to rest our heads.  Friday morning, we were reminded why we don't like staying here:  the free breakfast.  I know it's free, but all hotels offer a free breakfast anymore, and this one isn't even close to being par.  We were offered hot or cold cereal, bread, and, at least according to my sister, terrible coffee.  After eating, we headed out to Busch Gardens. 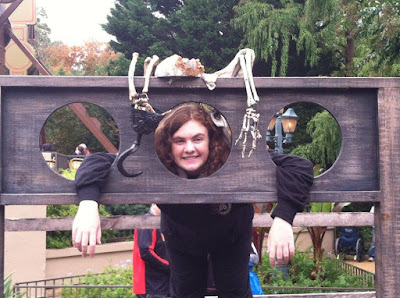 It was cool and partly sunny to start the day.  We were looking forward to what was forecast:  60 degrees and mostly sunny skies, with 0% chance of rain.  As the day went along, however, we were reminded that, despite all of the technology available to meteorologists, the weather can't be predicted until you look out the window.  Within minutes of arriving, the skies grew dark and it began to spit rain.  We're optimists, so we hoped that the rain might keep the crowds down, but everyone likely saw the same forecast as we did, and wouldn't change their plans despite how it looked. 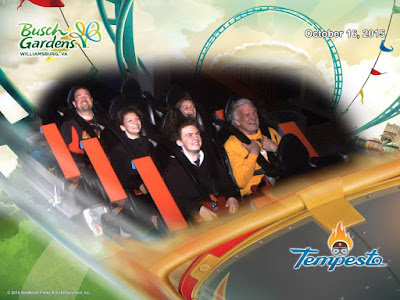 Brother Darren and his girlfriend, Erica, and her daughters, Brit & Cait, arrived soon after we did.  We got our requisite group picture, in England, and then we started having fun.  We headed to our usual first ride, on the Loch Ness Monster roller coaster, in Scotland, but it was our first hint that the crowds would be large.  So we mixed it up.  We all took the sky ride over to France and found no line for the Griffon.  We all (except Mom) hopped in line and rode in the front row for an exhilarating ride.  After it was over, the line was still short enough for a second ride, so we rode again. 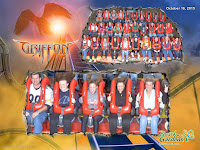 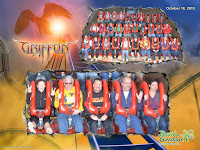 We continued to ride many more rides as we walked through the park, then we had a nice lunch at the Festhaus in Germany's Oktoberfest.  We arrived in time to see one of the shows, which had a Halloween theme, a song and dance show with bad puns.  But the food was outstanding, as usual.  After a break, we headed back out, but the rain was coming down much harder now.  We decided to shop for warmer weather, since it was clear it wasn't getting out of the 50s, and would be chilly when the sun goes down.  Then it was back to the rides.  The crowds continued to be heavy, and we weren't able to ride some of our favorites without long waits. 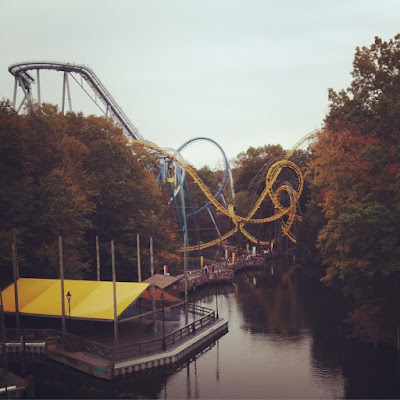 Busch Gardens is a beautiful place, and it has an added mystique about it in the Fall.  The leaves have started to change, and the air feels great.  My family has always enjoyed Halloween.  We like the scary stuff.  We've always recognized it for what it is:  entertainment.  But it's also more than that for the park.  This is where things have changed.  Halloween was a subtle addition to Busch Gardens, and really, all amusement parks, a few decades ago.  Now it's an industry.  A money-making industry.  And the appeal is more than just for families.  The park has changed by adding risque shows, and "haunted houses" that take things much farther than rides and decorations.  And these changes bring in teens, many without any supervision, and young adults, who would much rather drink and party than just be scared.  And the park has obliged them.  When nightfall came, the park transformed, with an influx of hundreds of people entering just for the Howl-o-scream festivities.  The seven or eight haunted houses opened up, each a walk-through slash- and gore-fest scare factory, with waits as long as an hour to enter them.  In other places, the techno dance music is turned up to an ear-blistering level, and bars with beer and mixed drinks are available for all who want them.  The anything goes looseness comes with it.  The park has specific areas marked as smoking lounges, but I saw MANY people lighting up cigarettes everywhere.  Busch Gardens is NOT family-centric anymore, not for Howl-o-scream.  And this is where the park has sacrificed what makes it unique to us.  It just isn't fun.  And that's unfortunate. 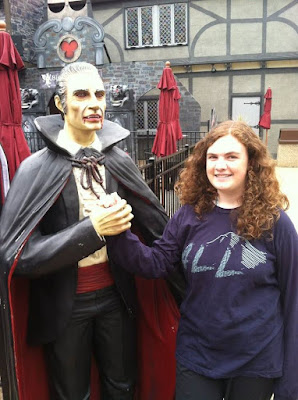 We visited a few of the haunted houses.  One had a theme of lumberjacks who hack up unsuspecting guests.  Another is a cornfield filled with killers.  And yet another is a demon-possessed house.  Mom's knee gave out on her, so Dad and she went to the entrance to wait for the rest of us.  We rode the Loch Ness Monster one more time before heading out.  It was a fun day, but not at all what we expected, though we've noticed changes in the park over the last few years.  It's making us jaded.  And that's sad. 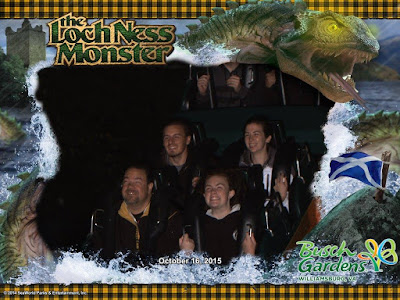 The park is celebrating 40 years of operation, and we've been coming for 38 of those years.  The problems we're seeing aren't limited to just Busch Gardens.  They're at all amusement parks. And they are very popular.  I guess we're just in the minority.  We're all getting older, and our disappointment stems from what we're used to, and what we would prefer to experience.  Things change.  Maybe the Christmas season will be better.

Have a great evening, everyone!
Posted by Eric Freed at 1:30 PM