My wife, Teresa, and I were looking for a new church home.  My wife's church, where we attended after we were married, was a place Teresa had been attending since her teens, but after we moved to Howard County, it was just too far away.  So, in the Summer of 2003, with a little one on the way, we began shopping around.  We visited four different churches, but none of them felt comfortable to us.  Then Teresa remembered a family that attended Mount Hebron High School, where she had been teaching 9th grade English and Public Speaking before moving to Reservoir High School upon its opening.  The student's father was the pastor of a church in the area.  She had gotten to know the parents, Mark and Lu, at regular Parent-Teacher conferences, and since Teresa taught three of their children over the course of several years, they met quite often and got to know each other well.  Teresa also noted that she could tell which students at the school attended this church, since the youth program was particularly strong, and the students just had a way about them that made them stand out.  Teresa suggested that maybe we should visit their church.  That was enough of a recommendation for me, and the next Sunday, we attended Grace Community Church for the first time. 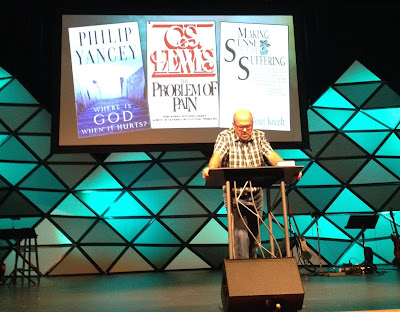 We liked Grace from the start.  Pastor Mark was very approachable, and his message was strong.  I liked his style and demeanor.  He was confident, knowledgeable, and humble.  And, man, could he pray!  The style of worship was very similar to our previous church home, so that made us feel comfortable.  And the fact that there were a few people there that Teresa recognized allowed us to feel a little more at home and less like visitors.  I told Teresa after the service that I thought we had found a new church home.

The only downside was the location.  While it was much closer to our home than Rockville, it was still a fair jaunt from our home in Laurel, and it also seemed very crowded.  The church was in an office park, and it really didn't feel like a church.  Parking was also an issue.  But it was clear that the church had a future building plan, and that was encouraging.  So we started to attend regularly.  It was great being in a new church family, and between the wonderful people we met, and Pastor Mark's messages, we started to feel energized.  It was nice to have a new church home.

Our daughter, Melody, was born in November that year, and we had to get our parenting legs under us.  It was actually a couple of months before we were comfortable enough to return to Grace with a baby and leave her in the nursery with "strangers."  But soon that was comfortable, too.  I remember that Easter Sunday, in April of 2004, Grace moved the services to Howard High School, and Melody was returned to us with a diaper change (with a sticker on the backside of her diaper letting us know that she had been changed).  We chatted briefly with Mark and Lu before leaving on that rainy Easter morning.

One week later, Teresa died.  It was the most horrible experience of my life.  She had suffered a fatal heart attack during a stroll that evening, and her death and home-going changed my life, and that of our little girl.  Melody was 5 months old, and I was still learning how to be a father.  Now I was a widower at the ripe old age of 34.  Mark showed up at our home the following morning.  He was such a pro.  It was obvious to me he knew exactly what he was doing, even if I didn't see it at the time.  He was so supportive, not just of me, but also my in-laws, who were grieving right along with me.  Mark was able to point us in the right direction of a funeral home and cemetery, as well as help us plan the funeral service at Grace.  And he prayed with us.  He was with us at the viewings at the funeral home, and supported us right through the funeral, connecting us with many people who were there to help, including the preparation of a wonderful meal after the burial back at the church that the people of Grace hosted for the family and a couple of hundred guests and loved ones.  I will never forget the incredible generosity and love that Grace showed us during that dark time.

Fast-forward one year, and I was in the midst of a deep depression.  I had been struggling with some health issues, and my faith was in a period of stagnation because I just wasn't allowing myself to find comfort in the Lord.  Grief overwhelmed me.  Prayers became rote and meaningless, at least it seemed.  I was attending Grace regularly still, but I found that I was breaking down often during the services, mostly upon hearing songs that I know Teresa loved to sing.  I hit rock bottom, but I was conscious of a need for spiritual help, and I poured out my soul into an email message that was sent to several of the pastors in my life.  While a few returned messages offering various degrees of support, only Mark called me on the phone and suggested we get together to chat.  And we did.

We met a few days later at Seibel's, a restaurant in Burtonsville, MD.  The first thing Mark noticed is that we were both wearing leather bomber jackets.  Then we talked.  Mark has this way about him that immediately put me at ease, and he really listened to me.  We talked about my health issues, and he told me about someone at the church who had a similar issue, and gave me that person's phone number so that I could talk about the procedure that I needed to have done, one that this person could give me the details about.  It really helped ease my mind about it.  Additionally, we talked about my daughter, and he suggested that I was really not going to be much good to her until I got help for myself.  This may sound like common sense, but I sure wasn't thinking straight at the time, and these were blockbuster suggestions.  We talked a bit about Job, and the fact that people still go through Job-like situations.  And then we prayed together.  We embraced as Christian brothers, and said our goodbyes, with Mark promising to check on me, and letting me know I could talk to him whenever I needed to.  And that day was the beginning of my healing road.  I don't know if he knows just how much he helped me that cold day during the Winter of 2005, but it meant the world to me.  God used Mark to get my attention.

Several years later, Mark and Lu set me up on a blind date.  They didn't just give me this young lady's phone number and send us out on a date; they set up the entire evening for us, including how to recognize each other at the Joanne Fabrics store in Columbia, to a bag full of conversation topics, to gift cards to restaurants for dinner, to instructions for each step of the entire evening of our date.  It was easily the most unique date I had ever been on.  While their attempt at matchmaking wasn't successful, it was a fun time and created a great memory, and I am so honored that Mark and Lu felt inclined to give us such a wonderful gift.

Grace Community Church is a special place.  And Pastor Mark is a special person.  I will continue to pray for him, and for his family, and as my friend.  Thanks, Mark!

Have a great evening, everyone!
Posted by Eric Freed at 8:31 PM