Halloween was fun.  Daughter Melody loves the scariness of the season, and since I wasn't sleeping well, I got up early Saturday morning and decorated.  She was suitably impressed, and happy, when she finally woke up at around 10 a.m. and saw what I did.  We spent the rest of the day getting ready for the festivities.  While I was on the couch most of the time, we did take time to carve a couple of pumpkins.  It was a beautiful Fall afternoon, though I couldn't enjoy much from the couch. 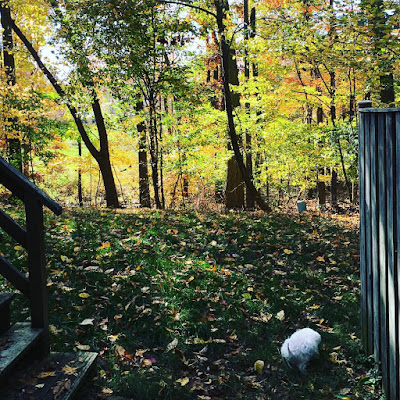 And, when darkness fell, Melody was ready in her Ladybug costume, though she decided to get rid of the uncomfortably fitting wings and go with a cape instead, which made her the Super Bug! While we didn't have the really cheap Halloween candy, we didn't go all out.  We had Dum Dum lollipops and mini Reese's Peanut Butter Cups, Hershey Bars, Twix, and Twizzlers.  I also had a bunch of mini Comic Books designed specifically for Trick-or-Treaters, and they always go over well, especially with the youngsters.

Melody went out with her friends, doing one pass through our small development.  I manned the door, despite still recovering from pneumonia.  Fortunately, Melody was done in about an hour, and she took over, allowing me to return to the couch.  We ended up with about 50 kids, which is about our average, I guess.  It seemed quieter than usual, but that's probably because I wasn't answering the door once Melody took over.

We shut off the lights and closed the door at around 8:15, and we spent the rest of the evening watching a scary movie.  We were both asleep by 10:30.

I had a better night of sleep last night, and that contributed to feeling a little better.  In fact, it's the best I've felt since before last week's funeral for Melody's great-grandmother, though I'm still coughing like crazy.  But I feel rested.

I love the time change.  Standard Time agrees with me so much more than Daylight Savings.  I find it ridiculous that we even have a time change, and it's even more ridiculous when you consider that Standard Time is shorter in length than Daylight Savings.  The Standard is the Standard, as Coach Tomlin, the Steelers head coach, would say.  Anyway, Melody took advantage of the extended night of sleep and didn't get up until almost 10 a.m.

We had a nice, quiet afternoon, mostly watching football (me).  Melody decided today was the first day of the Christmas Season, and she spent the whole day listening to Christmas music.

Tomorrow will be my fourth day of missing work, between the funeral and pneumonia.  I have a followup appointment with the doctor tomorrow, and I'm hoping he'll clear me to return to work.

Enjoy the rest of your weekend, everyone!