The biggest problem with traveling on the road with a teenage daughter is her propensity to crave sleep above the adventure of travel.  I'm the type of person that wants to be on the road at sun-up, but... Let's just say it became a challenge for both of us as the trip wore on.

Day 2 of our trip would take us to our first and only destination:  Chicago, IL, for G-Fest XXIII.  G-Fest is the largest regular gathering of Godzilla and Japanese monster fans in the world.  It's a family-oriented convention featuring presentations by fans and actors and crew from Japanese Godzilla films, including topics of interest, contests and gaming, new and classic kaiju  movies, a dealers room, and lots of fun.  My daughter and I have been going for about 5 years now, and I went to several of the first G-Fests back in the 90s.  It's held each year in mid-July at the Crowne Plaza Chicago O'Hare, in Rosemont, IL. 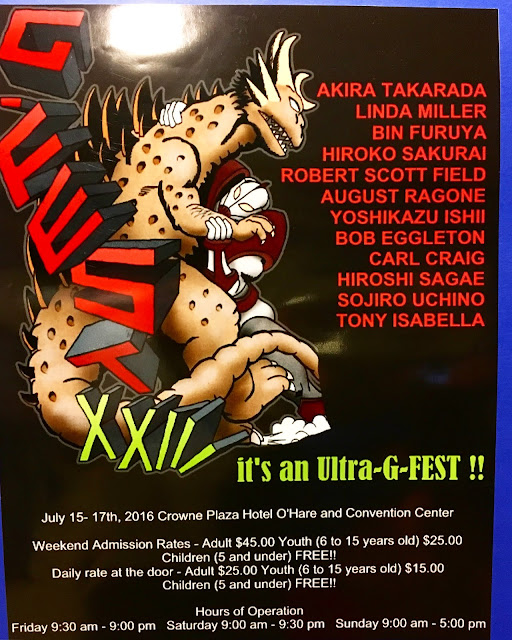 Making the trip to Chicago each year means trying to vary the route a little bit so that is doesn't get old, because it tends to get old.  We've flown, taken the train, and driven the turnpikes.  This time, I decided to take the "southern" route across Ohio and Indiana, and then drive north into Chicagoland.  We left our hotel at 7:35 a.m. and headed west on I-70.  It wasn't long before we hit the mother of all traffic jams.  There was an accident just east of Columbus, OH, and traffic came to a standstill.

The cell phone is a masterful tool, and has changed the face of travel.  With this little device, we can check our route and traffic issues on the spot, find restaurants and pit stops along the way, including making reservations at hotels, and find every roadside attraction in existence, as well as stay in touch with our friends and family through online social media.  Oh, yeah... we can also call and talk to people with it!

Upon hitting this traffic jam, we found out that there was an accident ahead that had completely shut down the interstate.  We quickly found a detour around the incident, and we were able to continue on with a minimal delay.  Just east of Indianapolis, we stopped for gas, ran into a Wal-mart for a few needed supplies, and then had lunch at a Cracker Barrel.  We were back on the road at 1 p.m. and headed towards Chicago.

Unfortunately, it was rush hour on a Friday afternoon.  Traffic was really bad.  We criss-crossed our way through the Chicago suburbs, sticking with highways instead of surface roads, and hitting pockets of stop and go traffic all the way to Rosemont.  We arrived at about 4:30.  Given the itinerary of G-Fest and not wanting to miss any of the afternoon sessions, we decided to go eat dinner first.  As is customary, that meant a stop at the nearby Giordano's, which is some of the best stuffed deep dish pizza I've ever had (yes, even better than Uno's and Lou Malnati's).  We weren't disappointed. 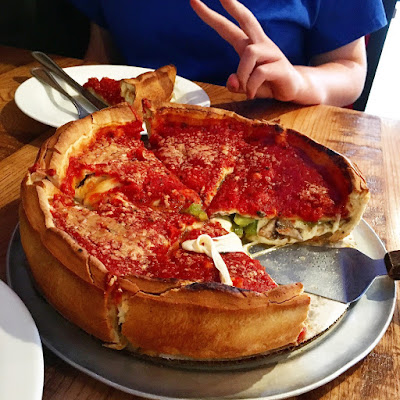 After a delicious meal, we headed over to the Crowne Plaza, checked in, and made our way to the intro session for G-Fest XXIII!  It was fantastic seeing so many big stars from some of my favorite Japanese monster shows and movies, and I received personal greetings from Akira Takarada, Bin Furuya, and Hiroko Sakurai, as they passed us after the session.

We were really excited to be back at G-Fest, and, exhausted from the 463 mile drive, we decided to crash for the night back in our room.