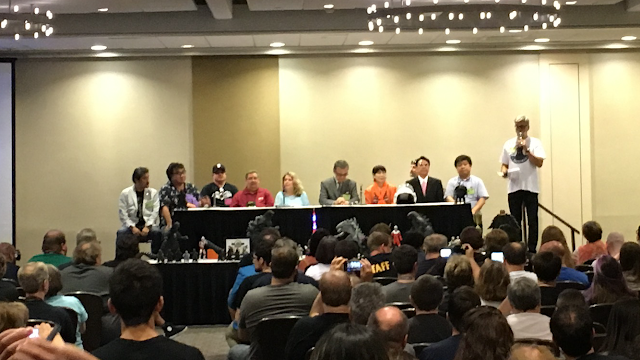 G-Fest XXIII, Chicago (Rosemont), Illinois.  G-Fest is the largest regular gathering of Godzilla and Japanese monster fans in the world.  It's a family-oriented convention featuring presentations by fans and actors and crew from Japanese Godzilla films, including topics of interest, contests and gaming, new and classic kaiju  movies, a dealers room, and lots of fun.

After arriving on Friday and attending the opening ceremonies, introducing all of the guests, daughter Melody and I crashed for the night.  We were excited to be at G-Fest, and we were looking forward to the beginning of our big road trip.

The Crowne Plaza Hotel O'Hare, in Rosemont, is a wonderful venue.  The rooms are very nice, and the views from the higher floors are actually kind of cool, as planes on final approach to O'Hare airport fly right by the windows (and they are appropriately soundproofed, too.  During G-Fest, the hotel airs rare TV shows and movies with a Japanese monster (kaiju)/sci-fi theme on the in-house TV channel, so during our downtime, we enjoyed watching some of the programs we wouldn't have a chance to see otherwise.  The hotel is fairly large, able to handle the needs of the convention (except for the long wait for the elevators), and we like that the convention has a home that we've become comfortable with.

I woke up early on Saturday morning.  I went down to the main level and got some breakfast stuff for us, returning to our room to eat.  I allowed Melody to sleep in, and I went down in time for one of the early sessions with Akira Takarada, star of the original GOJIRA (Godzilla).  Takarada is every bit the big star, and hearing his stories of his time on the sets of movies and working with other actors and directors in Japan, is just so interesting.  I particularly enjoyed his stories about Nick Adams, an American actor who starred with him in INVASION OF THE ASTRO MONSTER (aka, MONSTER ZERO) in the 60s.  He was interviewed by JD Lees, the publisher of G-FAN Magazine, and the organizer of the convention, and was translated by Robert Scott Field, an actor who played professional baseball in Japan and learned the language and lives there now, and is a popular guest at G-Fest every year. 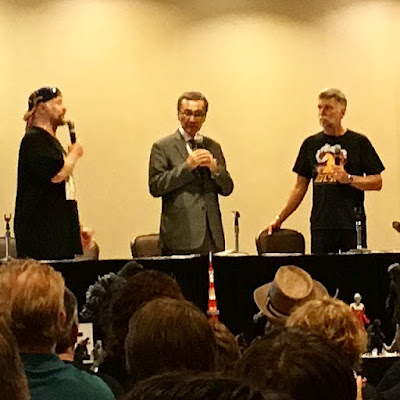 After an hour with Takarada, the next session was with Bin Furuya, the suit-actor who played the original Ultraman, and acted in many other kaiju movies and TV shows.  ULTRAMAN was one of my favorite TV shows when I was a kid growing up in the Maryland suburbs of Washington, DC, back in 70s.  I watched the show on Channel 20, which had a wonderful lineup of shows for kids each weekday afternoon, hosted by Captain 20 (Dick Dyszel).  I loved hearing Furuya's stories about the show, and the show he actually acted on (instead of being a suit-actor), ULTRASEVEN.  August Ragone, author of the wonderful book, "Eiji Tsuburaya: Master of Monsters," interviewed Furuya, and Field again translated. 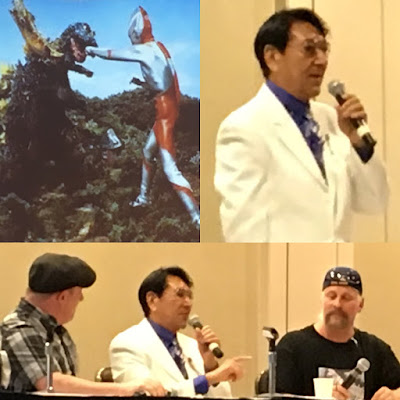 Melody joined me during the session with Furuya, and after it ended, we went to the Dealers Room, which has so much great stuff for sale.  Melody got a few t-shirts, and we enjoyed browsing through the merchandise.  We then walked around the convention to see the sites, including the wonderful model and art gallery. 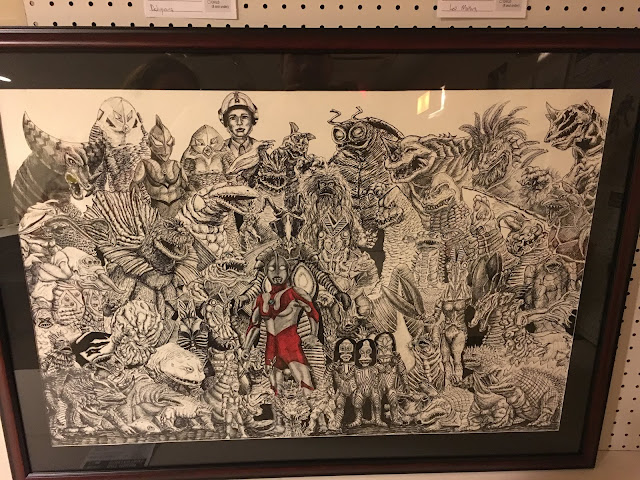 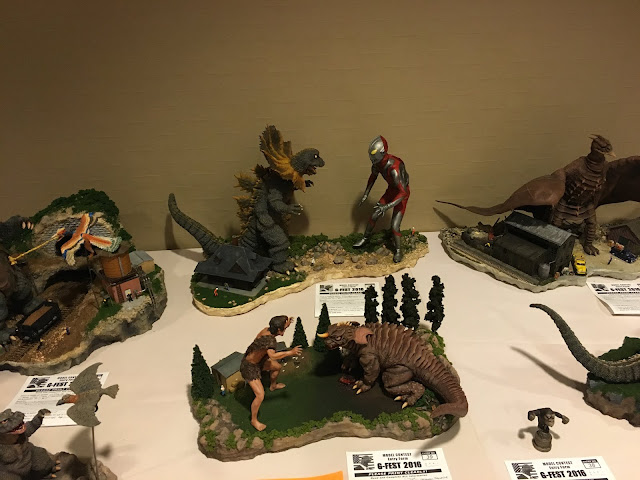 We then went to another session, this time with the wonderful actress, Hiroko Sakurai, who starred in ULTRAMAN, and also its predecessor, ULTRA Q.  This was her first trip to the US, so it was great to see her excitement and humbleness on display as she met with her fans. 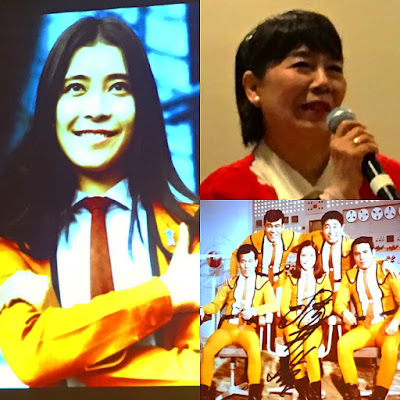 We lunched on some leftover Giordano's, then went to see a session with Tony Isabella, prolific writer and comic book historian, as well as the founder of the First Church of Godzilla (see Facebook).  He shared a nice history and slide show about monster kaiju in the comics, and I loved hearing about his love of monster movies.  I've long wanted to see him at a G-Fest, so this was pretty cool. 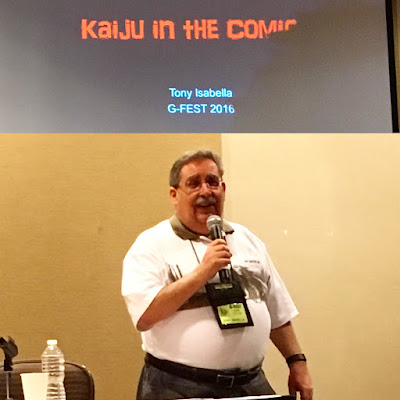 We went on a drive to one of our favorite places when we come to G-Fest, Mitsuwa Market, in Arlington Heights, where we got some goodies and some Japanese carry-out for dinner.  Melody got some Bubble Tea for the first time, and thus began a new addiction...

Back at the Crowne Plaza, we ate, then went to the Main Event of every G-Fest:  The costume parade.  We got some good seats since we arrived early, and we watched the Final G-Pardy, a trivia game in the same format as the Jeopardy TV game show.  Following that, there were raffle drawings for some neat prizes, with proceeds going to "G-Fans Helping G-Fans," which helps needy folks in the G-Fan family.

This year's costumes were very good, and the parade lasted more than an hour.  There are simple costumes, and some that are very elaborate, and all are inspired by Japanese Kaiju movies and TV shows.  The participants vary in age from young toddlers to the most "experienced" folks in fandom.  It's a fun party, and one of the highlights of every G-Fest. 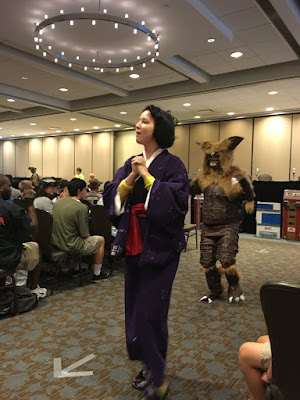 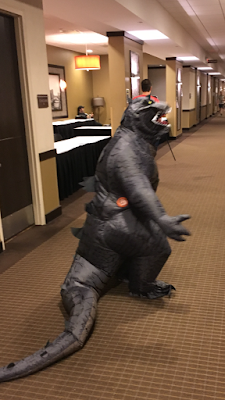 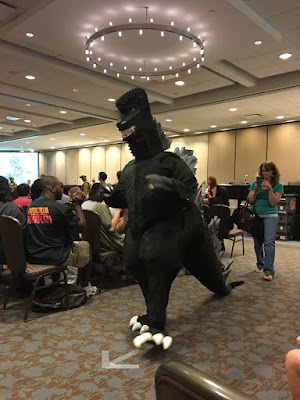 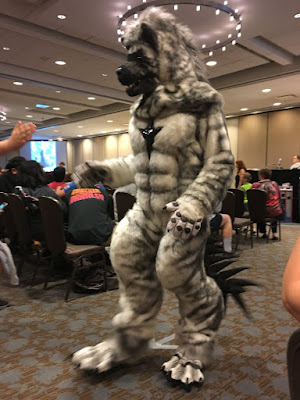 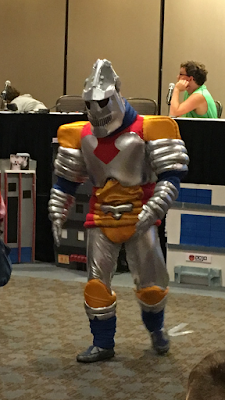 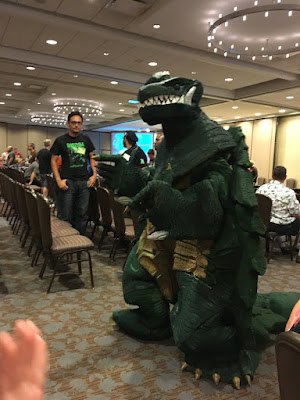 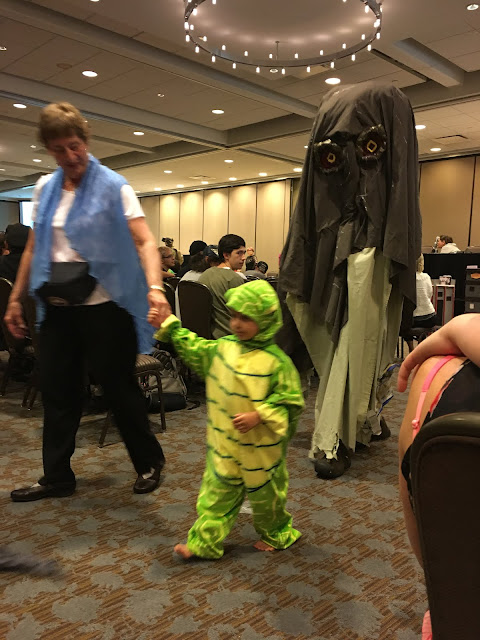 Following the festivities, we headed back to our room to watch movies on the in-house channel and rest.  Sunday morning, we got room service for breakfast, which was really great, probably our best meal of the trip so far (and definitely our most expensive!). 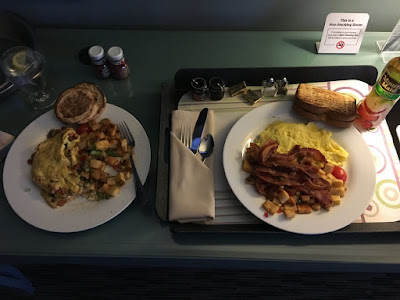 We checked out after getting ready, then we spent the rest of the morning wandering around the convention and making some last purchases at the dealers room, including meeting "Big In Japan" author Timothy Price, and artist Alan Barnes.  We shared with Timothy that we were taking a big cross-country road trip, and we chatted about our mutual love of roller coasters. 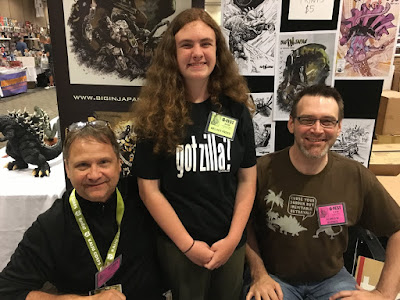 We ate lunch at the hotel's restaurant (the Front Desk gave us a voucher for a free meal when the hotel staff forgot to pick up our room service request for a Saturday breakfast late Friday night), then we hit the road.

It was another fantastic G-Fest!  I feel like we missed out on a lot of stuff this time, given how late we arrived on Friday, and then hitting the road on Sunday afternoon.  But this was one of the best G-Fests with so many wonderful guests, and the sessions were as enjoyable as ever.  But we were also excited to be hitting the road to continue our trip.

Have a great day, everyone!
Posted by Eric Freed at 11:29 AM