March Madness is upon us, and the Maryland Terrapins Men's AND Women's Basketball teams have given themselves the opportunity to sail into the postseason playing very well.  Unfortunately, for the Men's team, anyway, the NCAA Selection Committee didn't give them any favors.  The Terps ended up receiving a 4-seed, after most "experts" and fans assumed the Terps had played themselves into a 3-seed, and they are now in a position for a collision with the only professional team in the NCAA Tournament, the Kentucky Wildcats.  The UNDEFEATED Kentucky Wildcats.  Whew.

The Terps really did themselves a disservice by losing in the semi-finals of the Big Ten Conference Tournament to Michigan State, and that seems to have resulted in the Terps getting knocked down a few pegs, and the potential 3 turned into a 4-seed.  Many of the other schools in their region of the tourney are pretty good, too.  I wouldn't be surprised if the Terps have problems with West Virginia in the second (third) round.  I should have more faith in my Terps.  But reality is a little stronger than wishful thinking.

Like just about everyone else, I did fill out a bracket for the NCAA Tournament.  I always try to predict a few upsets, but it really is a crap shoot.  My Final Four includes Kentucky, Wisconsin, Michigan State, and Iowa State.  So two 1-seeds and two 7-seeds.

The Women's NCAA Tournament has Maryland as a 1-seed.  They're that good, having just come off a win in the Championship of the Big Ten Tournament.  I expect them to go far.  They play New Mexico State in the first round, and it's a home game for the Terps, on Saturday afternoon.  I think we're going to try to go to the game.

Right after the Selection Show last night, a commercial aired featuring Charles Barkley, Samuel L. Jackson, and Spike Lee, riding in a car.  Barkley is driving, and as he passes a "Welcome to Annapolis" sign, he hollers to the sleeping Jackson and Lee that they have arrived "...in The Annapolis."  Jackson and Lee are confused, and they try to get clarification, reminding Barkley that the NCAA Final Four is held in INDIanapolis.  Barkley gets a panicked look on his face as he begins to get berated by the others for heading to the wrong location.  Jackson ends it by saying, "We're in The Maryland."

I thought the commercial was hilarious, and decided to post about it on Facebook.  I wrote, ' "In The Annapolis."  Love it!'  I figured the only people who might comment are those who actually saw the commercial.  Immediately, one of my friends "liked" my post.  He's a sports fan, so I wasn't surprised.  But then I saw several comments.  One said, "?"  Another said, "??"  Still another said, "What?"  I was a bit bewildered.  I see a lot of Facebook posts that don't make sense to me, and I just let them go.  If I don't understand it, it's not meant for me to know.  But these friends wanted to know what it meant.  None of the three are sports fans.  Even if I explained it, they wouldn't understand it.  So I commented, "If you're not following the NCAA Final Four commercials, you're not going to understand the reference."  That was followed by even more comments.  "Oh, we don't get commercials like that where I live."  "I still don't get it."  So I just deleted the entire thread. 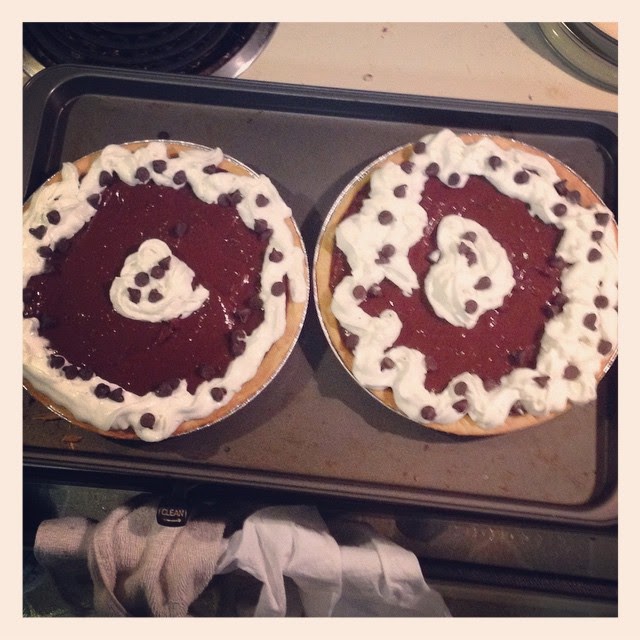 Saturday was Pi Day, so my wonderful daughter and I made a pie.  Actually, we made two pies.  I had some sugar-free chocolate pudding, so I mixed some up, then poured it into a couple of pie shells, added some Redi-whip, and added some chocolate chips.  Voila!  Instant pie.  So we had pie for breakfast.  We waited until exactly 3/14/15 at 9:26:53 a.m. and enjoyed some delicious, if extremely soupy, chocolate cream pie!


Have a great evening, everyone!