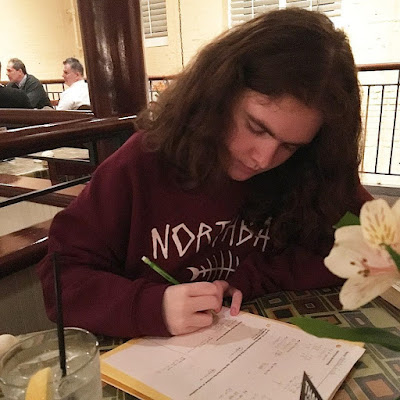 My very smart daughter, Melody, missed the past two days of school due to illness, tripling the number of days she has missed all year, and triple what she missed all of last year.  It's unusual for her to be so sick to miss school, but she was really out of it.  It wasn't the flu, but it was a debilitating cold.  She is feeling tons better, and returned to school today, bringing home a ton of homework.  I guess that's to be expected, but it's a shame that she has so much that she has to work through dinner.

She told me she had a craving for an old favorite restaurant, Ram's Head Tavern at Savage Mill, so we made plans to eat there for dinner this evening.  When it was time to head over, she still had a lot of homework, but in dedicated fashion, she said she wanted to work on it at the restaurant.  So while we waited for our food, she worked on her Algebra homework.  I was impressed.

Some days are grand, and some are difficult.  Yesterday was the difficult kind.  I haven't figured out what all of the triggers are for me, but sometimes all it takes is one action, or one wrong word, and I find myself in a poor mood that just gets exacerbated by other actions, snowballing into a thoroughly dreadful day.  That was yesterday.

Today was better, but I still couldn't shake the melancholy until I got home.  My father called me to chat about the Terps Men's Basketball team's terrible loss in the Big Ten Tournament earlier today, and once we got beyond that, I found my mood improving as we switched topics.  This is the second time in a week that Dad has been able to get me out of a funk and into a lighter frame of mind.

He shared a scary/funny story about my brother, Darren.  D was working his security job at a site in DC last night, and a "gentleman" approached him using some rather choice language.  D said he was high on something, and decided to confront my brother, who is 6 feet 6 inches tall and in pretty good shape.  He tried to bull rush him, and my brother laid him out with three punches square in the face.  The employees at the job site cheered him, and when the police showed up, they defended his actions, saying the guy deserved what he got.  The sequence brought to mind the scene in the movie UNCLE BUCK, when John Candy punches out the drunk clown at the kid's party.  Anyway, my brother is tough dude.

We're kinda missing the Olympics this week.  We really enjoyed the Games this year, and I exposed my girl to a few events that she had not seen before.  One of those was the bobsleds.

So, last night, we watched COOL RUNNINGS, loosely based on the Jamaican Bobsled team which competed at the 1988 Winter Games in Calgary, Alberta, Canada, and starred John Candy.  It's a cute movie, with some fun dialog, and we enjoyed it.

And it's much better entertainment than tonight's terrible Pittsburgh Penguins hockey game.  It's already 7-3 in the 2nd period.  Talk about ugly.  I think I'm turning in early this evening.