Teleworking on a snow day is not fun.  With the snow that crippled the Washington Metropolitan Area today, and the closure of government offices, I was forced to telework for the day.  I find it boring to work at home without the interaction of my colleagues and employees.  Attending meetings via phone is not the same.  So it was a miserable day.

On the flip side, I love the snow, and watching it come down as Spring began was pretty cool.  However, I felt guilty as I sat on the couch with my laptop, iPad, and iPhone, all day, attending virtual meetings and answering emails, as my neighbors were all out front shoveling snow off the sidewalk.

We were kind of disappointed this morning when we saw so little snow on the ground, but as the morning went along, the snow got deeper and deeper.  Check out this before and after picture separated by about four hours: 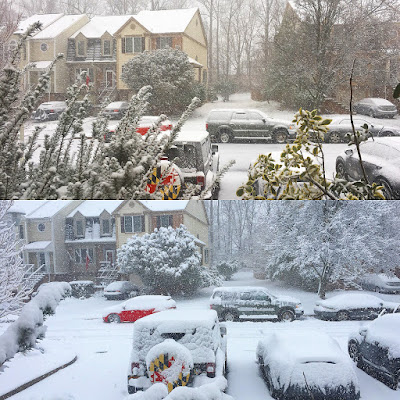 Anyway, my workday ended at 3pm, so I still had a nice amount of time to go outside in the snow, and catch up on some TV watching.

While watching NewsChannel8, my daughter and I were witness to some noteworthy news.  Check out the headline on this screen capture of the Pope losing his hat to the wind: 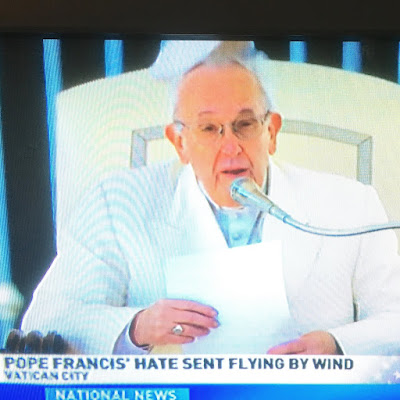 We just got word that schools are closed again tomorrow, so it looks like I'll be teleworking again.  We'll still take the snow any day of the week, though.  What we got today was more snow than what we got over the whole season, so it makes up for what had been a pretty disappointing Winter.  And maybe we can find a way to make a telework day more entertaining.