To live and love is to know loss, and I guess I've lived and loved a whole lot.  I've lost many loved ones over the years, and the pain of those losses remains in some capacity for all time.

A week ago, we experienced the lost of a beloved member of our family, our Faithful Maltese Pup, Scout.  She was in my life for just over 16 years.  Born on January 1, 2002, in a suburb of Pittsburgh, the puppy who came to my wonderful wife, Teresa, and me was brought to the attention of my aunt by a breeder friend, and she called us to let us know there was a little Maltese dog available to us if we wanted her.  She was the only pup in the litter.  Teresa excitedly told me we had to get her, and so we did. 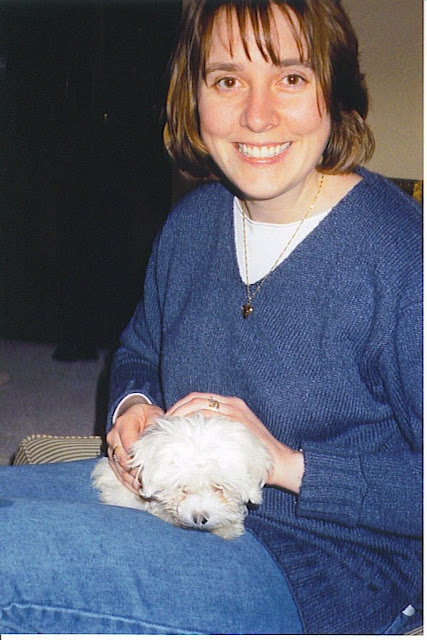 And just over 10 weeks later, on March 17, we headed to my aunt's house in Pittsburgh and we met little Scout, named after the little girl in my wife's favorite novel, "To Kill a Mockingbird," by Harper Lee.  She was a bundle of energy, that little dog, and she chased my aunt's two Maltese pups all over her house for the rest of the afternoon.  Teresa said it was love at first sight, and she loved that little pup as if it was our child.  I thought to myself that afternoon that, if she loved that dog that much, then she was going to make a wonderful mother to our children.

Scout was absolutely Teresa's dog, but she knew I was the pack leader of our little family, and she became my little shadow when I was home.  She was spoiled rotten, though, and while I attempted to do the right thing and crate train her, it wasn't long before Scout was sleeping in our bed.  Scout never surpassed 9 pounds soaking wet, but it's amazing the amount of room she took up in our bed. 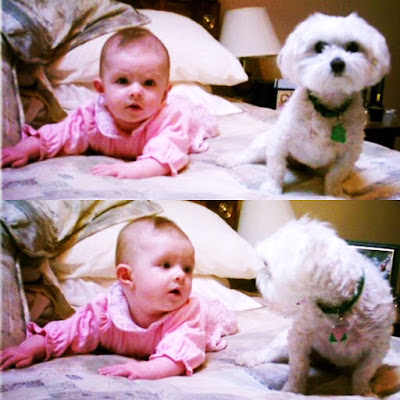 With the arrival of our little girl, Melody, two years later, Scout's immense curiosity of this little baby who joined our family soon turned to protector, and while there would be a little bit of jealousy in her little body, she knew that she was still loved.  Melody and Scout became buddies as Melody got older, and Scout showed great patience when Melody played too rough or pulled her hair. 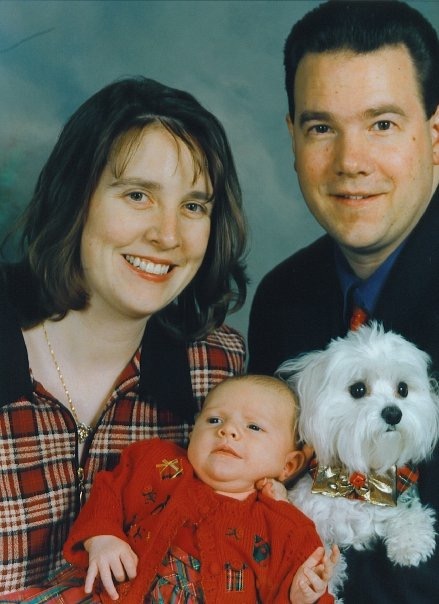 Our lives changed forever when my wonderful wife, Teresa, left this life in the Spring of 2004.  I was overwhelmed by the challenges brought on by being a single father and widower.  Grief took over, and while I mourned, I watched little Scout mourn, as well.  She knew Teresa was gone.  All of us were hurting. 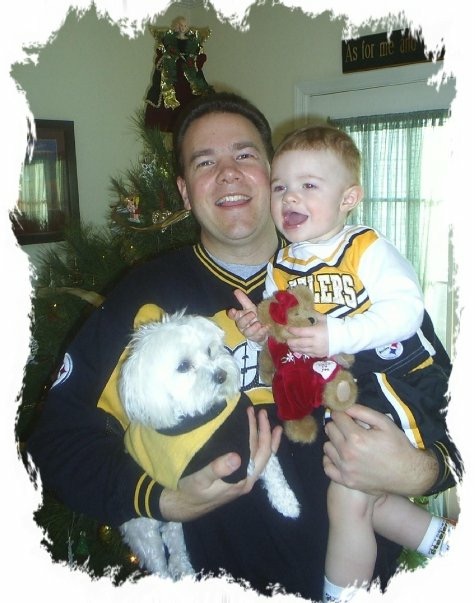 But Scout and I became even closer, with her hanging on to me as her master, and Scout providing the comfort I needed as a connection to Teresa.  She became my dog.  And I watched her continue to bond with Melody. 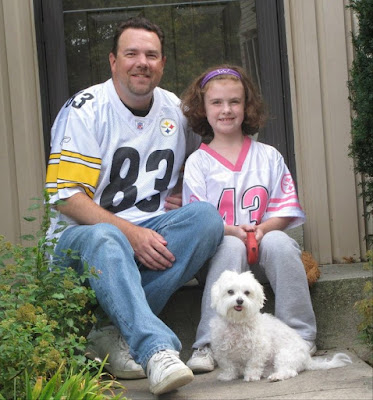 Scout began aging very quickly over the last few years.  She slowed down a lot, and pretty soon we were carrying her around the house.  Being so small made this easy, and we could see in her face the gratitude and love she had for us.  She found it challenging to run anymore, and soon we could tell she wasn't hearing us like she used to.  Then we noticed her eyes begin clouding over, and she found it hard not do occasionally bump into our furniture and her sight began to fail.  She stopped barking at around the same time, and we developed a kind of sign language, with her letting us know by nudging us when she needed a trip outside, or when she needed to eat or drink.

A year ago, we thought Scout was nearing the end, and we took her to our vet.  They examined her, and gave us some meds, and told us that she was, in fact, in pretty good health for a 15 year old dog.  But we knew then that we were on borrowed time. 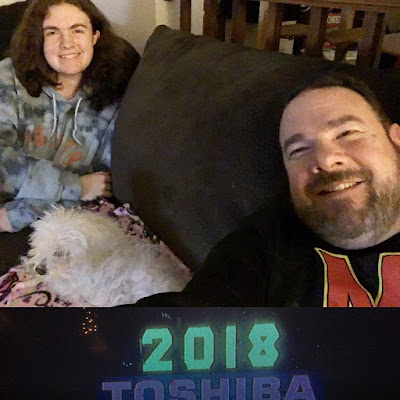 She continued to age, and slow down even more.  She had many "accidents," and the challenge for us was that she required so much care.  I imagine it's much like having an elderly parent who requires full time care.  I was being awakened by Scout frequently in the middle of the night in order to take her outside, and she never slept past 7 am each morning, even on weekends.  It was frustrating, but, like marriage, this is what you commit to when you became a pet owner.  This little creature relied on me to care for her, and my love for her meant that I would care for her needs. 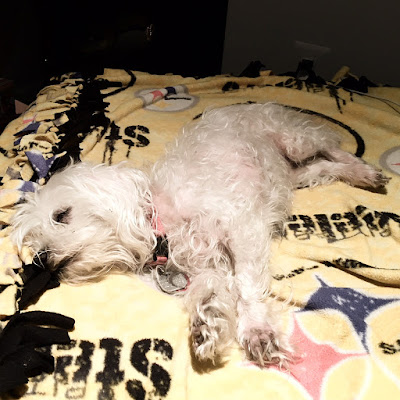 Last Wednesday, Scout's demeanor changed dramatically, and she couldn't eat or drink, or walk straight, and she drooled constantly.  She was not herself.  She showed all of the signs of having had a stroke.  We monitored her the rest of the evening, and she showed no improvement.  After a difficult night, I was convinced she was at the end.  On Thursday, I went to work to prepare for being out for several days (Friday was the start of Spring Break), but came home after two hours.  Melody had gone to school, but indicated to me that morning that I would wait for her before taking Scout to the vet.  Scout still showed the same symptoms, but did seem slightly improved.

Scout didn't appear to be suffering other than her physical issues, and I talked to the vet by phone.  They said to bring her in.  As soon as Melody got home, we took Scout to the vet.  It was a sad drive, as we knew it was Scout's last ride. 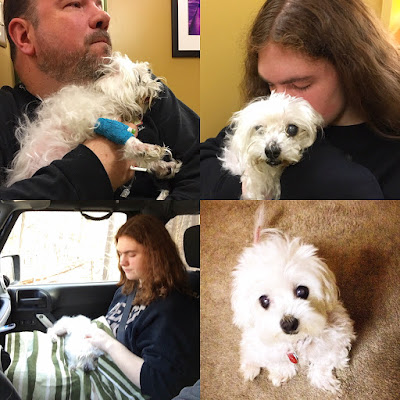 The vet was so good with Scout, and with us.  We talked options, but it was clear they agreed that, if we were ready, it wasn't a bad decision to have her put down.  We were with Scout until the end, and Melody and I both cried like babies.

The vet provided cremation services, and yesterday we brought her ashes home. 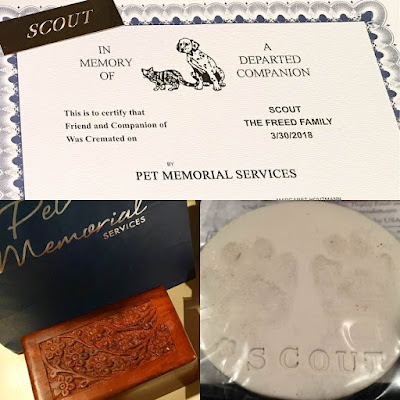 I loved that little dog, and will miss her so much.  She was such a good and faithful companion, for 16 years.  We are so thankful for the time we had with her.  I don't know for sure that our pets have souls, but I'd sure be blessed if the Lord gives us a reunion with our furry friends when this life ends.  And I'd like to think that Scout and Teresa were reunited.

I found the following poem this afternoon, and I'm sharing it here (with credit to the website):

I lost a treasured friend today
The little dog who used to lay
Her gentle head upon my knee
And shared her silent thoughts with me.

She’ll come no longer to my call
Retrieve no more her favourite ball
A voice far greater than my own
Has called her to his golden throne.

Although my eyes are filled with tears
I thank him for the happy years
He let her spend down here with me
And for her love and loyalty.

When it is time for me to go
And join her there, this much I know
I shall not fear the transient dark
For she will greet me with a bark.


Thank you, my Faithful Pup Scout, for loving me as much as I loved you... 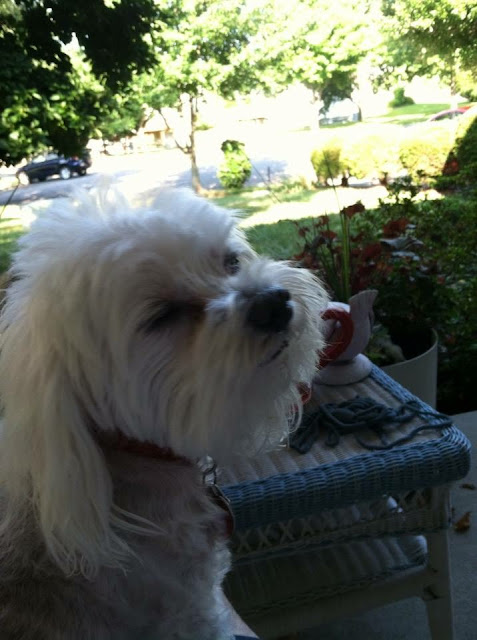