I picked up my daughter from Grace Adventures Day Camp earlier than usual so that we could hit the road and begin our big summer trip.  Unfortunately, she needed to get a few things back at our house first, so we backtracked, she got what she wanted, and we headed west.

Our first stop was at the Park 'N' Dine in Hancock, MD, an old family favorite.  The Freeds have been stopping here for almost 50 years, with the restaurant the unofficial half-way point between home and "home" (our Maryland home and our Pennsylvania "home").  Dad and his family in PA made the run between the DC area and Uniontown almost every weekend for many of those years.  The Park 'N' Dine is an old diner that has expanded into a fairly large restaurant that serves diner comfort food.  I ordered my favorite, the open face hot turkey sandwich, with stuffing and fries and gravy over everything.  Melody got a hamburger, her recent favorite dinner item.  After eating, she asked if she could have another burger.  Rather than wait, I told her we would stop at Hardee's up the street and get her one there, and that's what we did.  Another stop for coffee and we were off again.

We continued west on I-68 through western Maryland, then jumped on US 40, the National Road, at Keyser's Ridge, and into the Laurel Highlands.  We arrived in Uniontown to all of the familiar sites, but continued on to PA 43.  It was now complete between Uniontown and Brownsville, and we took it up to I-70.  It began to get dark as we headed west out of Pennsylvania and into the northern handle of West Virginia.  We stopped at a rest area for a little break, and I made a hotel reservation for the night in Zanesville, OH, about an hour west.  Unfortunately, we hit stopped traffic.  I turned on our CB to listen to the truckers, who always seem to know what's going on, and we were able to decipher that there was a construction zone about a mile ahead, and traffic cleared out from there.  That's exactly what happened, and we were free and clear all the way to Zanesville.

I have a love-hate relationship with Econo-Lodges.  They always have great rates, but there's always something about them that doesn't work out, and that is where we were staying for the night.  We arrived at midnight, quickly checked in with the overly friendly clerk and his boss, a jolly Indian woman who offered us a couple of cold bottles of water.  We went to our room, got ready for bed, and were about to go to bed when we experienced our first hurdle.  No water.  I went to the front desk and they assured me they didn't know why the water company had turned off the water.  In the meantime, they handed me a half-dozen more bottles of water with assurances they would figure out what was wrong.  I went back to our room and we went to sleep.  I awoke at around 4 a.m. and decided to check the water.  It worked!  But it was brown!  Definitely a broken water main, but at least we had water.  After letting it run for a bit, it cleared up.  I slept for a few more hours, and then we got ready and packed up.  We decided not to eat breakfast at the hotel, and we went to Bob Evans before hitting the road. 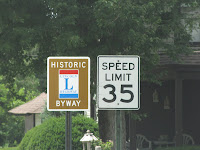 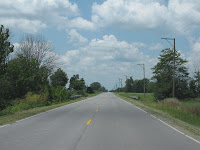 It was a long drive.  I had decided to avoid the turnpikes and take the southern route, which would include the Lincoln Highway.  That was fine, but the actual Lincoln Highway was mostly a small 2-lane that would double our time on the road.  Most of what we would be taking was a bypass paralleling the Lincoln with nothing to see.  This was farm country.  There was nothing to see.  After crossing Ohio and Indiana, we entered into the Chicago suburbs.  Traffic immediately got worse.  But our route took us up one of the toll roads that seemed to bypass much of the out-going traffic, and we got to the Crown Plaza in Rosemont, IL, by 6:00.  We quickly checked in and unpacked.  The Crown Plaza, which we had stayed at three times previously, was great, as usual.  We went downstairs to the lobby and got our credentials for G-Fest XX!  We scouted out the dealers room to check out the merchandise, then we went out to get dinner. 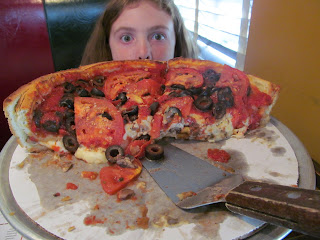 Our meal was one that had impressed me the year before:  Giordano's Chicago-style deep-dish stuffed pizza!  Oh, was it great!  As I mentioned in a previous blog post, it could possibly be the best pizza I've ever had.  After making little dent in the pizza, we took our leftovers back to the hotel and we crashed for the night.