Yes Live and In Concert

We went to our second concert in three days at the Warner Theater last night.  We saw the Monkees on Sunday night, then we saw Yes last night, and they were as awesome as always.  Yes has always exemplified musicianship and incredible music, and they did not disappoint!  Yes features Steve Howe on guitar, Chris Squire on bass, Alan White on drums, Geoff Downs on keyboards, and Jon Davison on vocals.  Yes's music has been termed as progressive rock, and sometimes "art" rock.  It is a very seriously played style of music, with complicated melodies requiring incredible musicianship, and extended solos by the musicians.  Their songs can be up to 15 to 20 minutes long, and some feature multiple movements.  They really are unlike any other band.

Their concert was different this year, as well, since, instead of playing just a bunch of their most popular hits, as they did last August, they instead played three entire albums of their music.  The albums were THE YES ALBUM, CLOSE TO THE EDGE, and GOING FOR THE ONE, which were released in the early and mid seventies.  They were arguably some of their best albums, as well, and featured many of their favorite songs.  Unfortunately, my opinion is that there were too many songs that I didn't care for, but it didn't diminish my enjoyment of the show.  My daughter, who became a Yes fan due to "forced exposure" to their music, also didn't enjoy it as much as she did the Monkees show, but she came away happy. 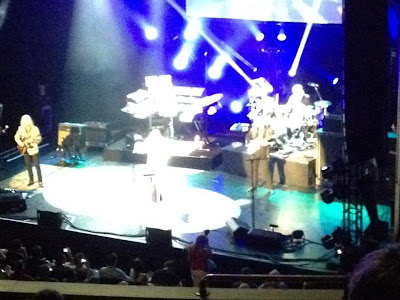 Yes started the show with CLOSE TO THE EDGE, and the title song was first on the set list.  It also was the longest song of the night, clocking out at almost 20 minutes, and is one of my least favorites.  To say the band started off with a bang was definitely not true.  "And You And I" is a good song, and feature great vocals by Jon Davison, who ably channels Yes's original and distinctive original singer, Jon Anderson, who "retired" from the group a few years ago.  "Siberian Khatru" followed; this song is a rockin' favorite of mine, and the guitar playing of Steve Howe is particularly good.  My only complaint, and this was the case on several of their songs, is that it felt like the songs were dragging slightly, which I believe can be attributed to the age of the band's members (aside from Davison).  I can only imagine that some of the difficult passages of their music are harder to play as they've gotten older, and can't be played as quickly as they were originally.  This is just speculation on my part, though.

The next album for the night was GOING FOR THE ONE, which came out in 1977, I believe, and had a slightly more "modern" sound to my ears.  The title song is a real rocker, with some awesome slide guitar work by Howe.  Next was "Turn of the Century", which was much better than I remembered.  "Parallels" was my favorite song of the night, with a nice mix of guitar and keyboards, and a prominent bass line by Squire.  Davison's vocals duplicated Anderson's perfectly.  Next was "Awaken", which is Yes's best song.  It features some outstanding keyboard playing by Geoffrey Downes, which is not easy given the complexities of the song as played by the original keyboard player, Rick Wakeman, who at the time was one of the best in the world.  "Awaken" was Jon Anderson's favorite, and with the mix of the instruments, it truly is an incredible song.  It also features Chris Squire's "Frankenstein" 3-necked bass, which has to be seen to be believed! 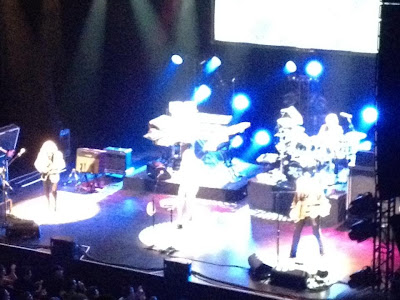 After the intermission, Yes played THE YES ALBUM.  This one seemed the most dated, and was the oldest album of the night.  While the songs are considered some of their best, it also had a few that I just don't care for.  "Yours Is No Disgrace" has been a concert mainstay for a while and is probably the most exciting.  "Clap" is a solo Steve Howe piece and really shows his talents on the guitar.  "Starship Trooper" is another fan favorite, and the band showed why.  The solos were great, and at one point, it seemed like Squire was trying to blow out the speakers.  "I've Seen All Good People" is a radio hit and brought the crowd to their feet.  My daughter knows the words and enjoyed singing along.  Next was another I wasn't as familiar with, "A Venture", but I greatly enjoyed it.  Last was "Perpetual Change", which seemed like an odd song to finish the concert with.  It is not one of my favorites, and it isn't the type of song to bring an audience to its feet, as you might expect.  The band was cheered greatly, though, and went off the stage to a standing ovation.  They returned for the requisite encore and performed one of their best and greatest hits, "Roundabout", to end the night.  It was an appropriate song to end the concert with.

We left feeling very satisfied with the show.  Yes is showing their age, but with Jon Davison, who appears to be younger than me, providing so much energy, the band should be in good shape for many years to come.  The only other note I'll make is that, for whatever reason, the sound system did not provide a nice blend of the instruments.  In fact, it sounded like everything was "turned up" a little too loudly.  In particular, Squire's bass seemed to overpower the other instruments for much of the night.  Notably absent was the playing of drummer Alan White.  While the other instruments seemingly too loud, White's drums were almost too quiet.  We went to the Yes concert last August, also at the Warner Theater, and had a much different experience.  We were down low and closer to the stage last August, while we were in the balcony for last night's show.  It was still great, however. 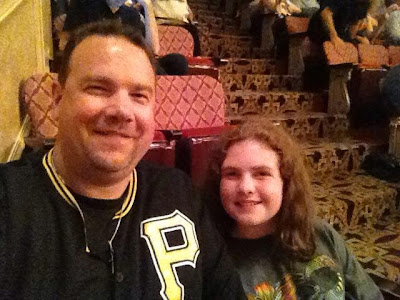