Up at 5:15 a.m. for work.  Rushed home at 11 -- Vacation time!!!  Straight to Laurel Car Wash for a much needed and much postponed cleaning.  Over to Grace Adventures Day Camp to pick up Melody.  They have such a great staff!  Melody & I came home to load up our Jeep, then we hit the road to Chicago!  Left at 1:15.  Up I-95 to Route 100 to US 29 to I-70 West.  Made a brief stop at a McDonald's to get a little bit of a late lunch and an iced coffee.  Back on the road to the Sideling Hill Rest Area on I-68.  Dark clouds in the sky mean my newly washed Jeep won't stay clean...  Rain almost immediately after getting back on the road.  Bad storm!  Heavy rains and crazy winds!  Rained all the way to Keyser's Ridge.  Decided to stay with I-68 into West Virginia instead of US 40.  Turned out to be a mistake.  Stopped at another Rest Area in WV to double check mileage on GPS and assess our route.  Normally would take US 40 West to Uniontown, then Route 43 and 51 into Pittsburgh.  Instead, we decided to take I-68 to Morgantown, WV, and then I-79 north to Pittsburgh.  Route turned out to be fraught with issues.  Areas of construction, accidents, and off-and-on rain causing stop and go traffic, marred our trip, Arrived at the Max & Erma's for dinner in Cranberry, PA, at 7:15.  Took us six hours to make a trip that should've been less than five.  We had a nice meal, plus their trademarked hot baked chocolate chip cookies!  Got gas at a Sunoco, and a fresh cup of coffee, and we hit the road again... PA Turnpike to Ohio Turnpike to a Comfort Inn in Maumee, Ohio, just past Toledo.  Hotel in a shady area, but too tired.  To bed after midnight!  But we were happy to make it to Toledo, which was our first day goal.

Lord, thanks for watching over us and keeping us safe through the storms.  Praying for good rest and safe, fun travel tomorrow.  Amen.

Up at 6.  We got ready, at a typical Comfort Inn breakfast, and were on the road by 8.  Cooler weather, still overcast, but became sunny as we went along.  Boring travel along the turnpikes.  Into Indiana!  Stopped at a service plaza... possible the worst one ever.  Good job, Indiana.  Place is a dump.  No food services.  Rest rooms were atrocious -- smell was bad and not clean.  Shady people everywhere.  Watched an older man give a toddler an empty box of cigarettes to play with on top of the trunk of his car.  Huh!?!  The whole place looked like it should be bulldozed.  Decided not to get gas and wait until the next rest stop.  Got out of Dodge.  Next service plaza up the road was much better, and I filled up at a Philips 66.  Entered Central Time Zone and Illinois.  Heavy traffic along I-90 in and around Chicago.  Finally arrived in Rosemont, IL at noon. 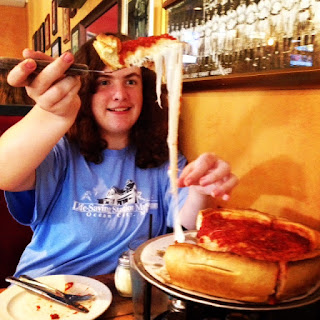 We went straight to Giordano's for my once-a-year deep dish stuffed pizza!  It was just awesome!  On to the Crowne Plaza.  Check-in was a breeze.  Got parked, headed to our beautiful 12th floor room-with-a-view, where we unpacked and caught our breath!  Back out to the registration table for G-FEST XXII!  Got our credentials and started exploring.  G-Fest is the largest gathering in North America of fans of Japanese giant monsters.  Checked everything out, walked around, and Melody got some stuff in the dealer room.  Good time.  Took a break in our room and ate some leftover pizza, then to the opening ceremonies.  JD Lees, editor of G-Fan magazine and the host of G-Fest, introduced the guests:  Director Masaaki Tezuka, Actor Noboru Kaneko, Friend of the show Robert Scott Field, and author August Ragone.

Then everyone funneled out for the Big Concert at the nearby Pickwick Theater for Symphonic Fury!  The drive over was uneventful, but other events in the area around the theater made parking nearly impossible.  Very frustrating.  We gave ourselves 45 minutes to make the 10 minute drive, but still didn't find parking until the start of the show.  Dumb luck gave us a space three full blocks away, and we ran to the theater.  Got held at the door because we had print-at-home tickets, which apparently confused the ticket takers.  Once we got in, the show had already started.  How everyone else found parking and got seated is anybody's guess, but once we were seated, we relaxed and enjoyed the wonderful concert.  Music was from composer Kow Otani, a big name in movie scores in Japan, who was in attendance.  After intermission, we heard a suite of music from the wonderful Akira Ifukube, the incredible composer of many of the Godzilla and other monster themes.  I was a backer of this Kickstarter event, and I was very pleased with my investment.  It was a great show. 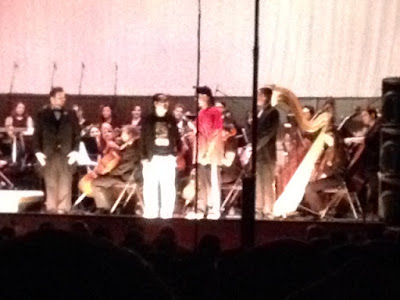 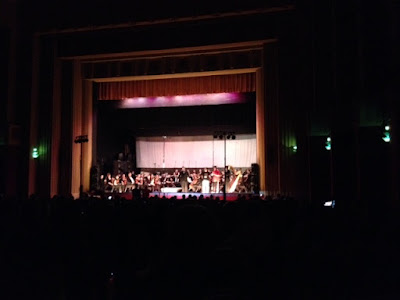 We went back to the hotel and crashed.

Lord, thanks for a great day!

Up at 7.  Decided to try room service for breakfast.  It was delivered at 8, and it was terrific.  It was also expensive, and would be the most expensive meal of our trip.  We got ready kind of slowly.  Out the door at 9:45.  Down to the show.  Shopped a bit in the dealer room, then saw a session with Noboru Kaneko, with Scott Field. 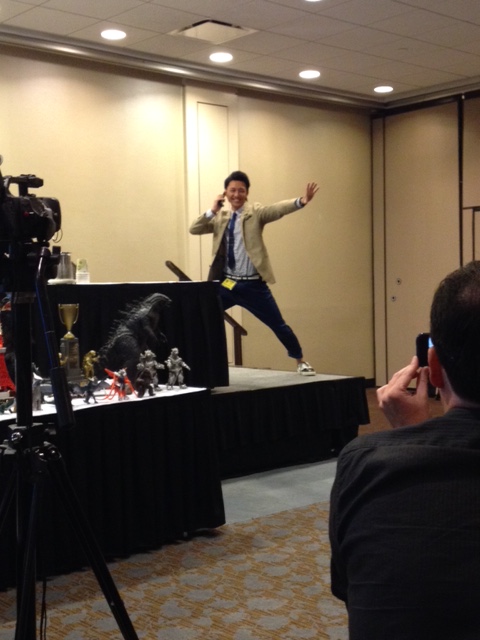 Had a makeshift lunch at our room, then went out exploring at Mitsuwa Japanese Market in Arlington Heights.  This is a favorite stop of ours.  Got a bunch of great Asian snacks, and then a great Japanese-style meal that we took back to our hotel.  Decided to enhance it with some White Castle burgers, but we couldn't find one!  We found an historic McDonald's, which was kind of cool, and we passed East Maine High School, which is where part of THE BREAKFAST CLUB was filmed (the football field). 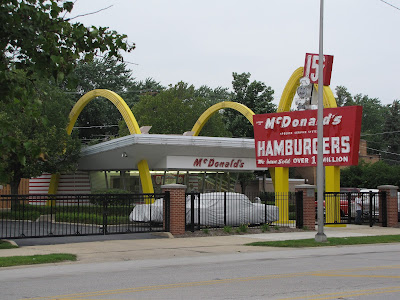 Back to our hotel.  We ate a nice meal and relaxed, and I actually got a nap.  Headed back down to the show at around 6:30.  The place was packed out for the annual costume contest.  No seats anywhere in the viewing areas.  Melody found a seat on the floor near the main viewing area, and I camped out against the wall, about as far from the action as possible.  Melody got bumped out of her primo spot by a few selfish adults who just don't care that there were kids sitting there.  Great costumes by a lot of people, and we had a great time seeing them.  After the costumes, we saw a few of the homemade films, which was fun.  Then we crashed back at our room.

Lord, thanks for a fun day!  Prayers for more tomorrow, plus a safe drive out of town. 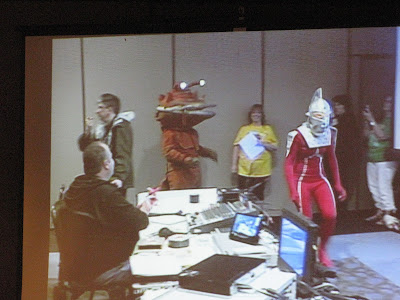 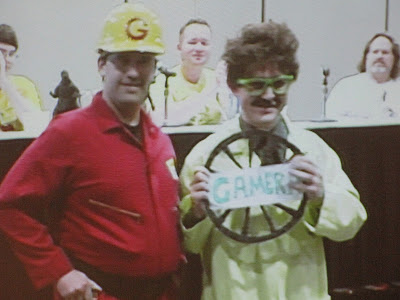 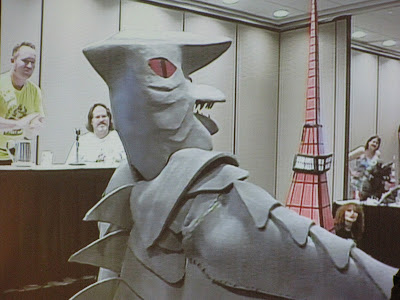 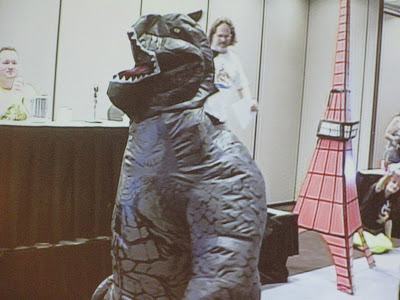 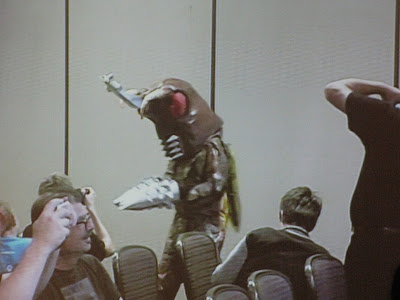 Up at 7:30.  We slowly got ourselves ready and packed up, then loaded up the Jeep.  Formally checked out of the Crowne Plaza, but still a lot of show left in G-Fest!  We went to a session by Robert Scott Field, "Android M-11," who showed us a cool video clip of a short film he made with students in Japan, and then told us about writing his autobiography, which should be out by next G-Fest.  We walked through the dealer room one more time for a few last deals.  Saw a session on Symphonic Fury, and then mentioned that next year's should be great, too. 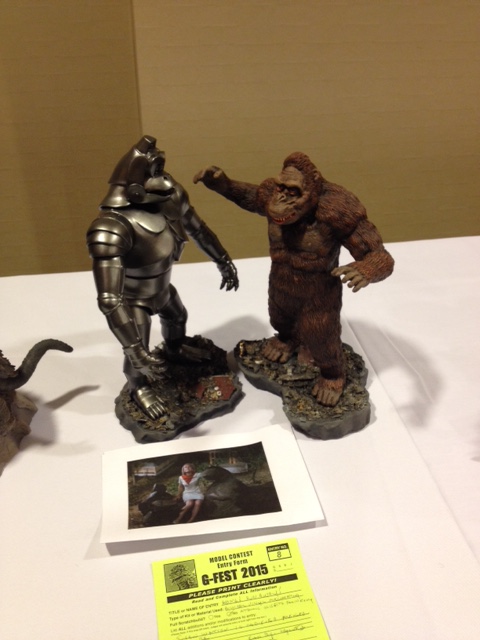 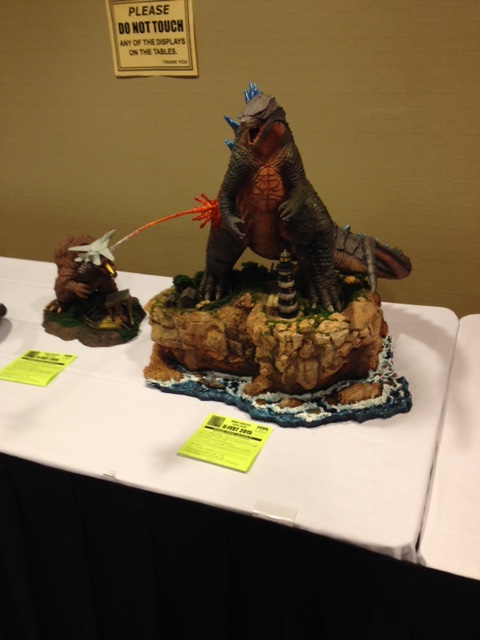 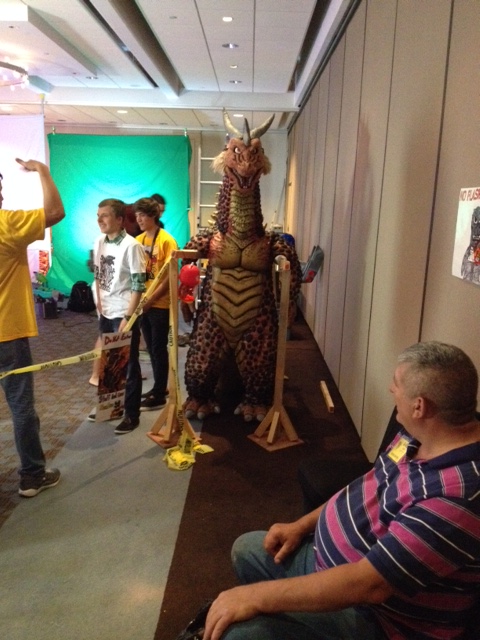 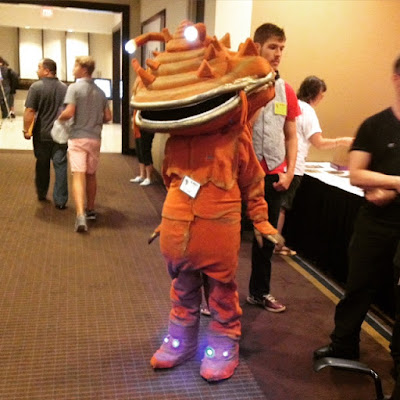 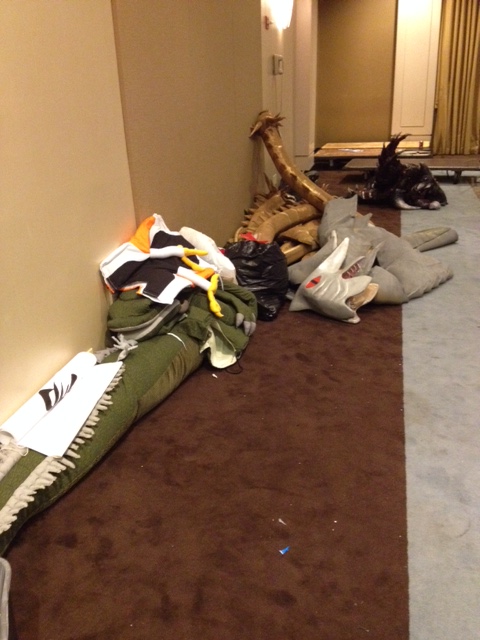 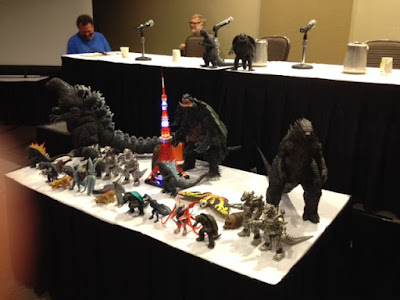 We had a nice lunch at the hotel's restaurant, Chicago Fire.  Drove up the street to Target to get a Rand McNally road atlas.  I've been so disenchanted with our GPS.  Going Old School, my prerogative as a cartographer.  Back to G-Fest for JD Lees session on G-Fest, G-Fan, etc.  He's a good guy.  Lastly, we attended Stan Hyde's Kaiju Konfessions, the official close-out of G-Fest.  It was a great show!  We immediately hit the road and headed out of town.  Took I-294 to I-80 to I-65 south towards Indianapolis.  Getting late, so we stopped to eat at a lousy McDonald's, about the only thing still open on a Sunday night in the middle of Indiana.  Terrible meal.  This is why I don't like to eat fast food.  Gassed up and got some coffee, then continued on down the road.  Decided to stop at a Comfort Inn in Bloomington, IN, at 11:30.  So tired.... on to bed immediately.

Lord, thank you for keeping us safe, happy, and healthy.  Amen.