Up at 7.  We got ourselves ready, at a nice breakfast, and then checked out.  We were on the road by 9.  As we checked out, the hotel manager assumed we were there to visit Indiana University, mistaking Melody as a college student!  Once on the road, we headed towards Holiday World in Santa Claus, Indiana.  Our GPS, which I have a love-hate relationship with, gave us a terrible route to the park.  Lots of backroads made for a much more lengthy drive.  We finally arrived at 10 after two hours on the road (going from the Eastern Time Zone back to the Central).  The time change kept messing me up.... Indiana has too many time zone boundaries!  We had a great time at Holiday World!  Nice small-town park with world-class coasters.  The Raven started us off.  It's a fun ride, an old school woodie.  We rode up front, and it got our blood flowing.  Next, we rode the Legend.  There was a long line, probably the longest we saw all day, and the ride had a complication that took one of its trains out of rotation, which kept us waiting in line for 30 minutes.  It was a fun coaster, though.  The we rode the Voyage.  Wow!  What a ride!  Very tall, very long wooden coaster that gets lost in the woods.  Very fast, and seems to go on forever.  Just an incredible ride.  Moved right into my personal Top 5 favorite coasters.  This was also Melody's 100th different roller coaster!  (My Top 5 - Millennium Force, Cedar Point; Apollo's Chariot, Busch Gardens; The Voyage; Loch Ness Monster, Busch Gardens; Thunderbolt, Kennywood.) 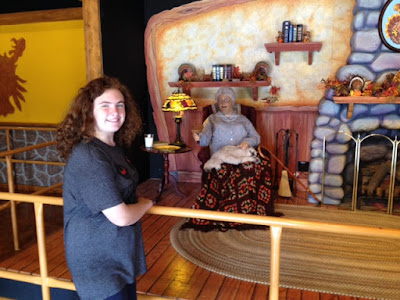 Had a delicious Thanksgiving lunch in the Thanksgiving section of the park, then we roamed over to the back end of the park and rode the brand new Thunderbird roller coaster.  This is a steel launch coaster, which goes quickly from zero to 60 and has a smooth, unique design.  Really fun.  After riding it twice, we walked over to The Voyage and rode it again.  It was so hot, though, so we decided to cut short our day at the park.  We rode a few more rides, including the Raven, then shopped for souvenirs, before heading out around 4:30. 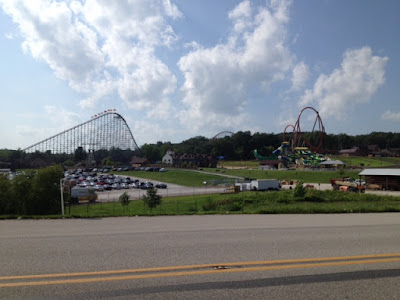 We headed east to Corydon, IN, and checked into at Comfort Inn, topping off the gas tank at the next door Shell station.  We checked in, freshened up, then had a tasty dinner at the adjacent Frische's Big Boy.  Came back to our room and we crashed.  Eventually went to bed at 10.  Lord, thank you for a really great day!  Praying for more good times tomorrow!

Up at 7:30.  Melody up later.  After breakfast, we finally hit the road at 10:20.  On to Louisville, KY, and the Kentucky Derby Museum at Churchill Downs.  Neat museum and tour. 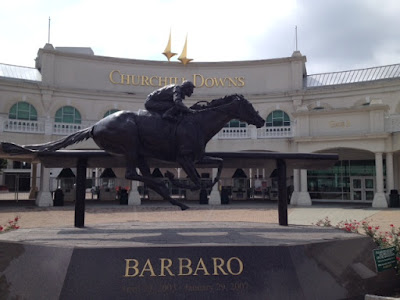 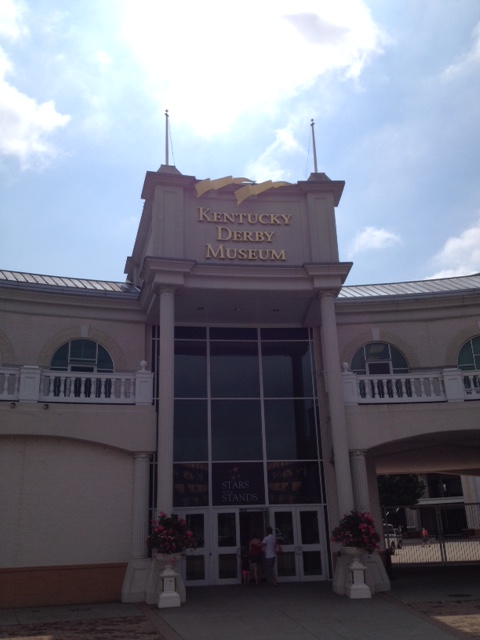 Tried finding a place to eat lunch, but construction in and around Louisville and the suburbs made stopping very difficult.  Finally stopped at a KFC (where else do stop when you're in Kentucky?).  It was not very good, and the place was really dirty.  Why is it so many fast food places don't seem to care or respect themselves.  I hate fast food for that reason... except Chick-Fil-A.  On to Cincinnati.  Ironically, we arrived in downtown Cincy just as the Major League Baseball All-Star Festivities were getting going.  Wish we could've planned a little better.  We drove right past Great American Ballpark.  However, the skies got very dark and we had a brief rain storm as we exited downtown.  Found our Quality Inn just outside of town, in Blue Ash.  After checking in and changing clothes, we went to visit my old friends, Tim & Lisa.  Way back in the 90s, Lisa and I worked together at two different churches as youth leaders.  She was the youth group director, and I was a counselor.  We were a part of a foursome that worked really well together for about 6 years.  Lisa and Tim moved to the Cincinnati area, where Lisa grew up, shortly after that, and we've stayed in touch.  Tim worked as a steward on Air Force One under President's Reagan, Bush, Sr., and Clinton.  Lisa hadn't seen Melody since she was a baby, when she came to my wife Teresa's funeral in 2004.  I hadn't seen Tim since 2000, when Teresa and I were on one of our cross-country adventures.  Really nice to see my old friends!  They took us to Skyline Chili for dinner.  Melody loved it!  They treated us right and gave us a grab-bag of goodies. 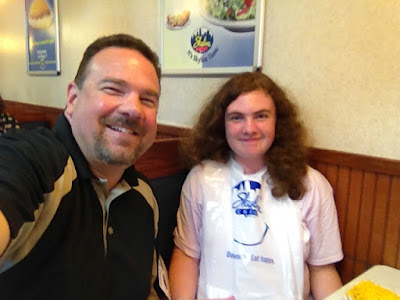 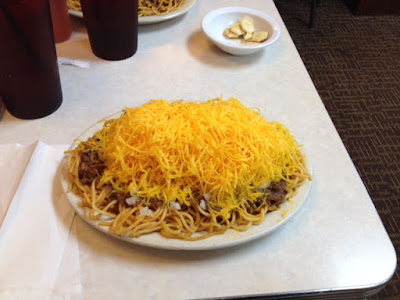 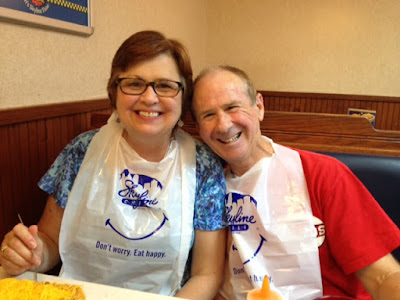 After we ate, we went back to their place to gab for a while, then we said our goodbyes and headed back to our hotel.  We checked in with my mother (Grammy), who was sitting with Faithful Pup Scout, back at home.  At our hotel, we went to bed at around 11, after watching a good bit of the All-Star game.  Lord, thanks!  Prayers for a great day tomorrow!  Thanks for a wonderful day!