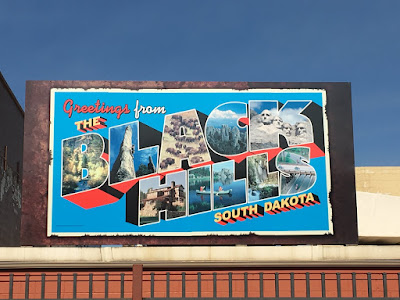 I love Wall Drug Store!  It's such a cool place.  We were up early and checked out of a very poor Econolodge, and immediately returned to Wall Drug Store for breakfast.  The ambience of this place just speaks to me.  There is great Native American and Western art on all of the walls, and the food is diner style, but just what I like.  And 5 cent coffee, to boot!  And the free ice water is everywhere. 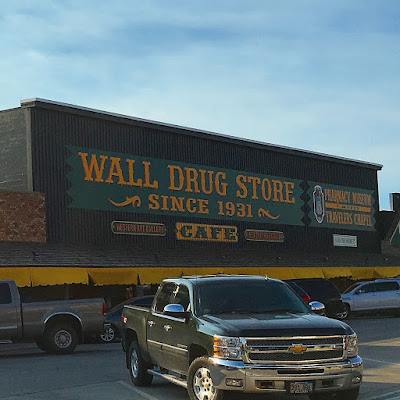 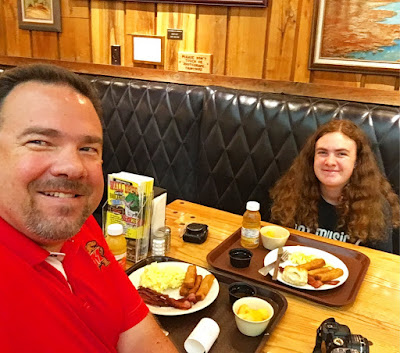 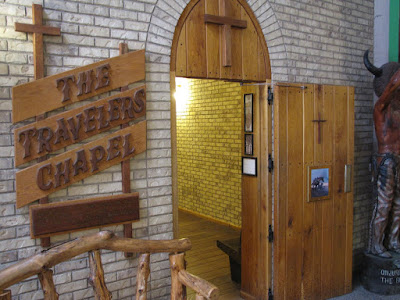 After eating, we spent a great deal of time wandering around and picking up souvenirs.  The Traveler's Chapel is a nice spot, and the book store has a lot of great reads.  We considered a pair of cowboy boots, but ultimately decided we didn't need them.  All in all, we were there for 2 and a half hours.

We hit the road again at 10 and headed west into the Black Hills.  Timothy Price, who we met at G-Fest, author of "Big In Japan," told us about a neat attraction, so we took a detour to Rushmore Cave.  Rushmore Cave advertised a Mountain Coaster, something we discovered during our Spring Break trip to the Great Smoky Mountains, so we were excited to ride one Out West.  Unfortunately, they got caught up in red tape and construction was delayed, so the coaster was not finished.  They have an interactive movie/shoot 'em up 4-D ride, so we did that instead.  It was a longer detour than we intended, and we were just a bit disappointed about the mountain coaster, but it was fun. 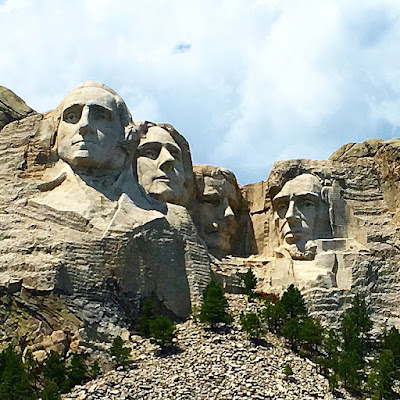 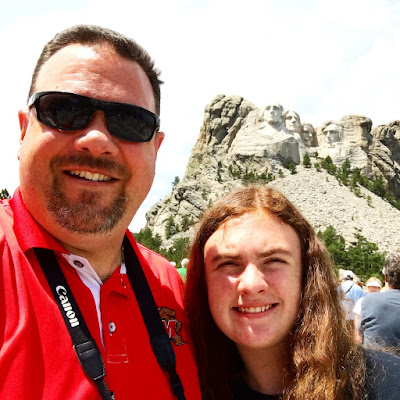 Next stop was Mount Rushmore!  This is always a favorite stop, and it always causes my patriotism to swell.  It is a dramatic scene, cut into the side of the mountain, and it can be seen for miles in many directions.  This was my fourth visit to Mount Rushmore, and Melody's second, but it is still awe-inspiring. 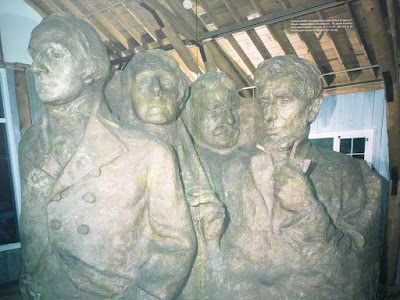 It was very crowded, and very hot, with temps souring into triple digits.  We took the requisite pictures, then headed to the cafeteria for a really delicious meal.  While it's not the same building, I can't help but be reminded of the dramatic scene in Hitchcock's NORTH BY NORTHWEST, when Cary Grant is shot in the cafeteria at Mount Rushmore.  That movie is what inspired me to want to visit the memorial.  Well, that, and the pictures and stories my father told me about his visit to Mount Rushmore with his father and brothers back in the 1970s. 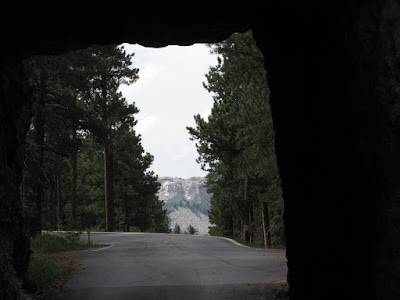 After eating, we walked through the museum area, then got some ice cream (Thomas Jefferson's vanilla!), before deciding to hit the road.  It was just so hot!  We headed out to Route 16A, the Iron Mountain Road, which goes right into the mountains and offers spectacular scenery and views of Mount Rushmore through several tunnels. 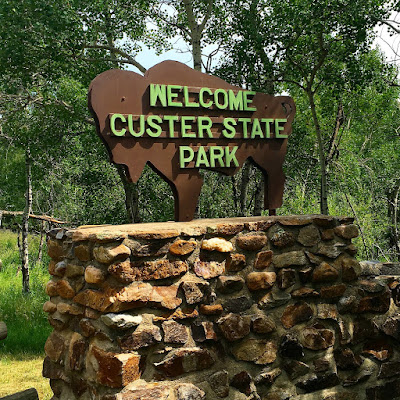 Next was Custer State Park.  This park is known for it's wildlife, and the huge herd of bison that typically hangs around the main roads through the park, providing great photo ops and entertainment.  We stopped at the new visitor center, where park rangers were telling guests where the best spots were to see the buffalo.  He gave us some tips and their last reported location, and told us some incredible stories of some of the stupid things guests do to get pictures of the bison, endangering their lives in the process.  He told us that a woman was gored just the day before when she wandered too closely to a stubborn bull. 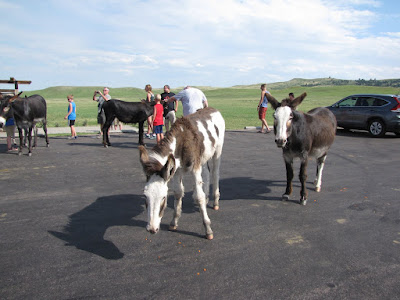 Back on the road, we wandered thru the park and decided that a few dirt roads would get us closer to the last reported location of the herd.  We ended up in some very remote areas, but we never found the herd. After more than an hour criss-crossing through the back roads, we decided to exit the park.  Our only wildlife were the wild mules who beg for food. 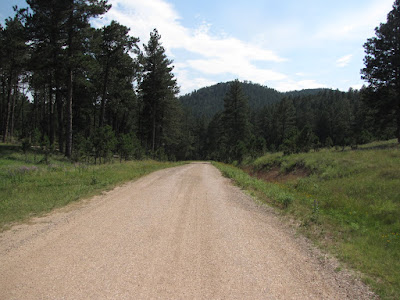 We headed to Custer, SD, a really cool little town we stayed in during our trip to the area almost 8 years ago.  It hasn't changed a bit.  The only sad thing was seeing the old Flintstones' Bedrock City amusement park, which was rundown when we were here before, was now closed. 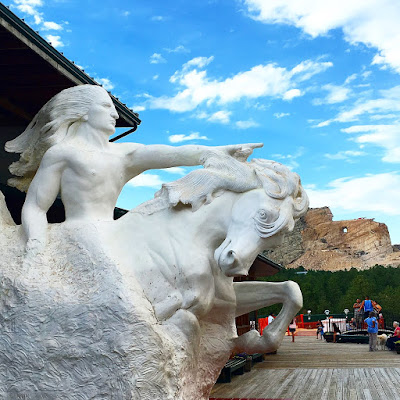 We went north and soon arrived at another favorite spot in the Black Hills:  the Crazy Horse Memorial.  It's still a dramatic sight, even if it appears that no progress has been made on the mountain, which is being carved into the likeness of the great Lakota leader,Crazy Horse.  The memorial itself represents all Native American tribes, and is the largest sculpture in the region.  It's impressive. 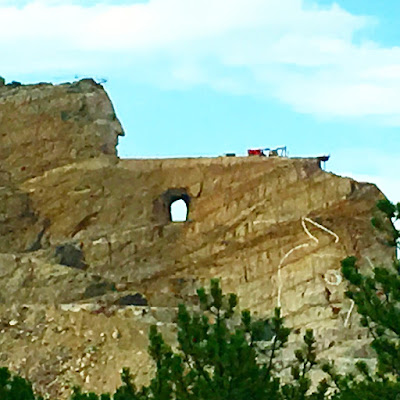 We watched the film about the creation of the memorial and what it represents to the people there, and we explored the site.  We got some souvenirs, and marveled at the spectacular memorial.  Then we headed to our last stop for the day:  Deadwood. 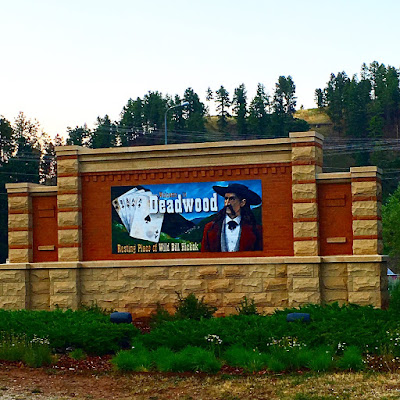 Deadwood is a real wild west town, and worth seeing.  It's just a bit over rated, though, and the lodging reflects that.  I made a reservation at Cadillac Jack's, a casino that, while on Main Street, is very far from the touristy area worth visiting.  I was very disappointed, particularly given how expensive the rooms are.  I wish I had done my homework.  It's a very nice place, but not at all what we wanted, and definitely not a kid-friendly location.  It was already late, so we didn't get a chance to explore in the town itself, and we ate at the hotel's restaurant, which was fair. 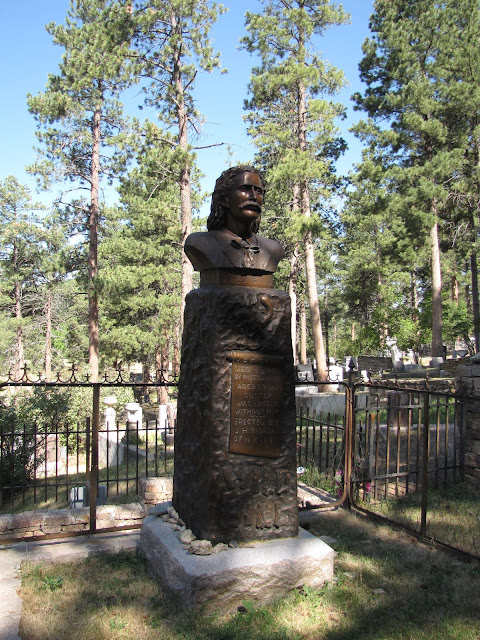 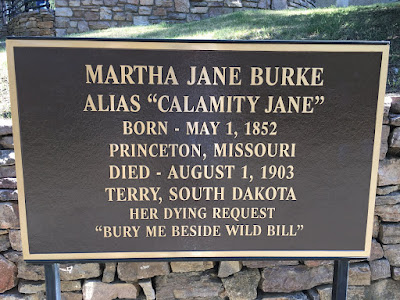 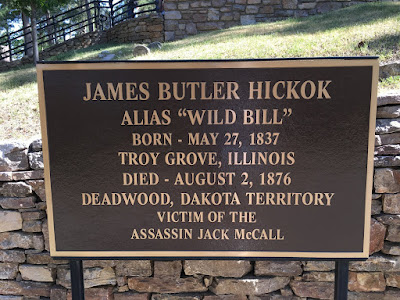 After a restful night, we were up early.  There was no breakfast to speak of, so we just checked out and looked for a place to grab a donut or something.  The town was slowly waking up, but there really wouldn't be anything open until much later, and we had a lot of distance to cover this day.  We did drive up the mountain overlooking Deadwood to visit Mount Moriah cemetery, where we visited the grave of Wild Bill Hickock and Calamity Jane. 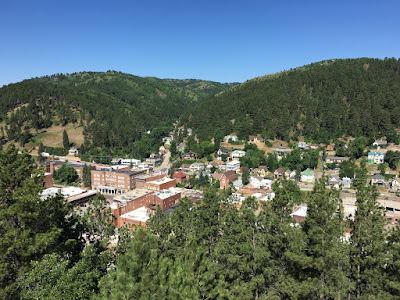 We enjoyed our 24 hours in the Black Hills, and I wish we had more time to visit.  There is so much to see and do, but since we had visited the area before, and we had a lot of the country yet to see, we headed north and west out of Deadwood and set our sights on Wyoming....

Have a great day, everyone!  And best wishes, blessings, and thanks to our many Veteran's who keep our freedoms alive and well in this wonderful country.  May God continue to bless America!