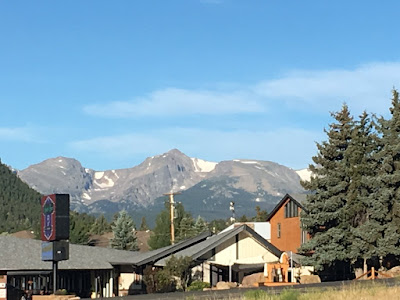 I was up early, and I went outside to explore a bit.  The picture above is what I saw.  I felt energized.  There's just something about a mountain view that impacts me to my core.  God's handiwork in creating the Earth provides so much beauty.  And the Rocky Mountains in Colorado frame it well.

Daughter Melody slept in just a bit, and I checked out the breakfast situation.  The Rodeway Inn was dated, but functional and cozy, and the breakfast room was airy and bright.  I got some coffee, then headed back to the Jeep to clean the windshield.  A couple on a motorcycle was parked next to me, and I chatted with them.  They were headed north to Montana, having come from a trip out west.  I wished them well, and checked on Melody.  She was up and getting ready.

We packed up our stuff and loaded up the Jeep, then went to get breakfast.  It was crowded, but we found a table and ate quickly.  Then we pulled out, heading into Estes Park, CO.  We stopped at an Information Center, and found some souvenirs.  I bought a CD of cowboy songs, which became our soundtrack through the Rockies.  Then we headed to the park. 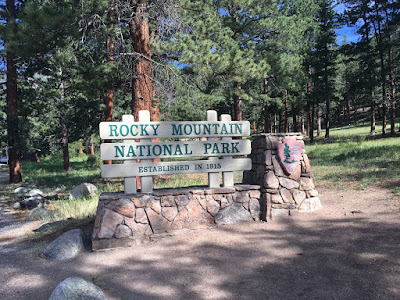 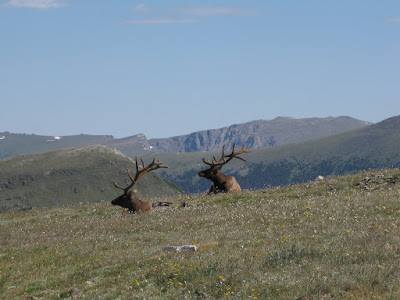 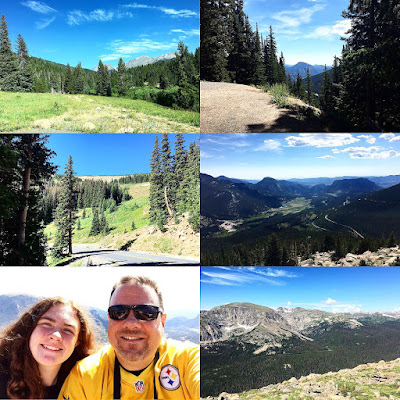 It was about 9:30 am when we entered Rocky Mountain National Park.  It is a beautiful park, and the drive along Trail Ridge Road is spectacular.  We took our time and took lots of pictures, getting out to hike a few of the short trails that provided even more gorgeous scenery.  The only negative is that, as we went through the park, we became slightly numb to the scenery, since every turn and view is more and more of the same.  It was almost too much to take in.  We rounded one bend and, sitting right above the road, were two elk, just lounging in the sun. 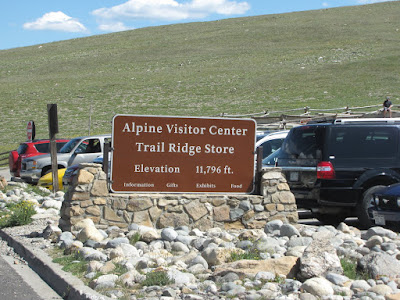 We stopped at the halfway point, at Alpine Visitor Center, at an elevation of 11,796 feet.  We visited the gift shop, took lots of pictures, and grabbed a few snacks.  I was reminded of the last time I had visited this spot, back in 2000 with my wonderful wife, Teresa.  It was here that she got very nauseous, and we realized she was suffering from altitude sickness.  I had told Melody this story, and she was very worried that she might get it, too, and she admitted to feeling a bit ill.  I don't know if it was the power of suggestion, but we decided to get back on the road and start heading out of the park.  It was nearing the lunch hour and we were getting hungry. 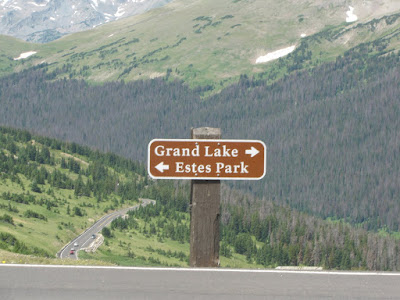 We headed towards Grand Lake, though it was slow going due to the amount of traffic on Trail Ridge Road.  We tried stopping at the continental divide, but it was so crowded, we couldn't even find a spot to pull off the road to grab any pictures.  We soon exited the park and drove into Grand Lake.  It was crowded here, too.  We passed all the way through the town looking for parking and trying to decide on a lunch spot.  At the end of the main street, we turned around and headed back through town in the opposite direction. 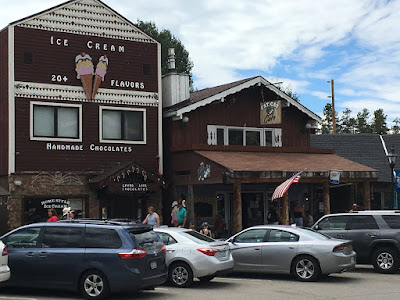 We finally found a place to park, and decided on the Fat Cat Cafe as our lunch choice.  It ended up being a neat stop.  The restaurant was very cozy and the food was great.  I'd describe it as unusual comfort food.  It was a busy place, but nice. 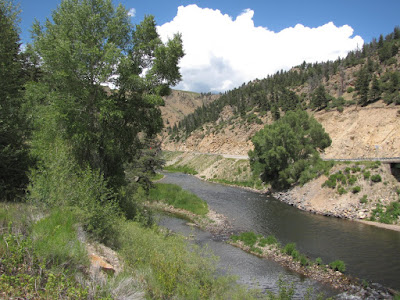 Back on the road, we had a choice to make.  I had mapped out this part of the trip before we left multiple times, and each time the GPS and road trip apps took us in a northwesterly direction from Grand Lake towards Glenwood Springs.  At the town of Granby, US 34 meets US 40, and the easiest, but longer, trip is to follow 40 east down to I-70 near Georgetown.  I've gone that way twice in the past.  But the road travels southeasterly and seems to be a long way in the wrong direction.  The GPS insisted we go west on 40, towards Kremmling.  From there, we could circle around and through the mountains in a westerly direction to Route 131, and south to I-70 at the little town of Wolcott, a much shorter trip.  I decided to follow the GPS. 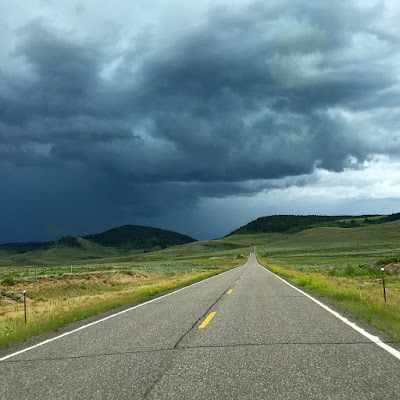 We had more spectacular scenery, and aside from the 2-lanes and slowdowns due to RVs on the road in front of us, we made pretty good time.  At Kremmling, I was blindly following the GPS and it took us south on Route 9, with a right turn just south of town.  It was here I caught myself.  The GPS had calculated our route down a 25-mile dirt road.  I was generally opposed to going off pavement, let along 25 miles of rutted road, particularly with storm clouds rapidly gathering in that direction.  All along, I thought this route was paved, but it apparently is not.  I pulled out the atlas (yes, hard copy paper maps!) and found that our only option at this point was to go back to Kremmling, go west on 40, then jump on Route 134, which would eventually tie in at the other end of the dirt road.  But it was a substantially longer trip than we planned. 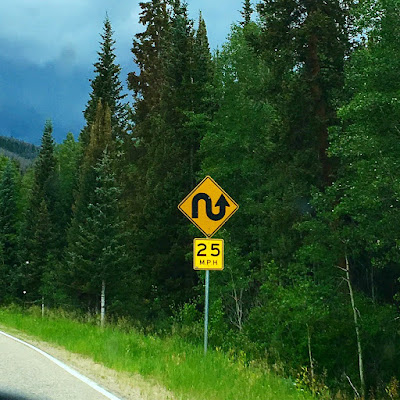 We returned to Kremmling along our new route, and then we had one of those moments that was terribly frustrating at the time, but kind of funny in hindsight.  We were at a red light, and I reached down to grab my warm, unopened bottle of Diet Mountain Dew.  I quickly opened it and it shot right out all over my face, dripped down my shirt, and covered my lap and driver's seat.  I yelled, causing Melody to laugh, and I quickly pulled off the road.  It was a big mess.  I keep plenty of towels in the Jeep, and I dried off as best as I could.  I was soaked down to my underwear.  I dried off the seat, and used the towel as a seat cushion so I wouldn't have to sit on a wet seat.  I wasn't happy about my predicament, but we continued on. 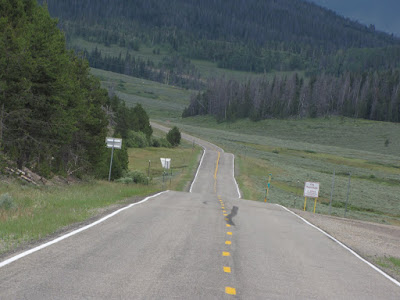 The drive along our new route was long, tedious, and stressful.  It went through the mountains and was very slow-going.  There was practically no traffic, and we ended up passing through multiple thunderstorms and heavy rain.  I hated that we were so far from civilization.  If anything happened, we were just far enough off the beaten path that we might be in trouble.  All told, we went about 165 miles between Grand Lake and Glenwood Springs, which took us almost 4 hours. 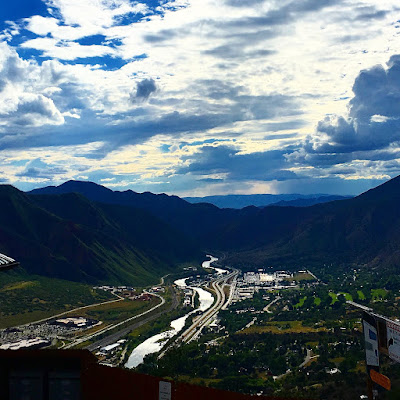 In Glenwood Springs, which is a very scenic town (isn't everything in Colorado scenic?), we headed straight to Glenwood Caverns Adventure Park.  I was hoping they might have a discounted fee for a late afternoon arrival, but found that there is actually free admission, with the option to pay by the ride, or purchase a wrist band fro unlimited riding.  There was a roller coaster at the park, and a mountain coaster, and we hoped to ride both.  The cashier told us that we could just purchase a tram ticket and decide what to do once we reached the top of the mountain.  It was at this point that we realized that, by tram, he meant a cable car ride on a wire up the side of a mountain.  My fear of heights notwithstanding, the cable car ride was not what we anticipated.... 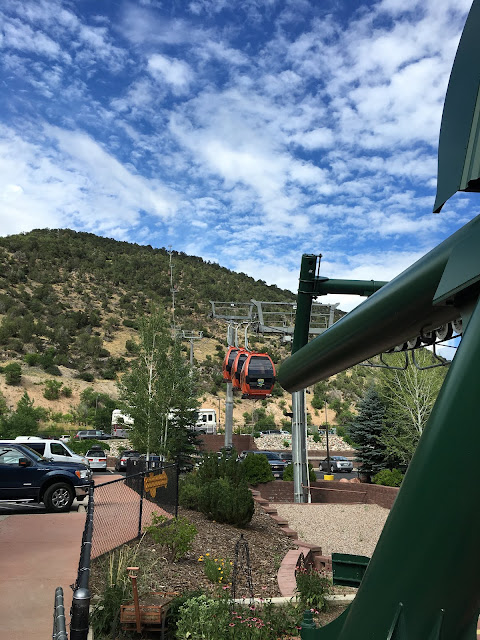