The Midwest is flat.  And while I identify more with the friendliness and inherent values of the people in this part of America, the topography leaves me feeling.... well, flat.  With two cross-country trips already under my belt, I look at this part of the country as just a necessary bridge from home to the excitement of The West.  But it takes a long while to get from there to there.

We left the hotel in Charles City, Iowa, filled with the excitement of the journey still riding high.  We headed west and north towards Minnesota, but we had to dodge a lot of road construction, which significantly hampered our speed.  There wasn't much to see in this part of Iowa.  Again, the flat land just stretches forever, and we found ourselves getting lost in the music playing on our car stereo.

A word about our playlists:  our stereo has a hard-drive with almost 4000 songs handpicked by both of us.  My daughter, Melody, enjoys mostly modern pop, and leans towards alternative rock.  She loves Twenty One Pilots, Imagine Dragons, and Panic! At the Disco, among others.  I'm more of a classic rock fan, from the 60s thru the 80s, and I like the Eagles, Steely Dan, ELO, Yes, and U2, and jazz, with the James Taylor Quartet, Brubeck, Don Ellis, Count Basie, Louis Prima, Stanley Turrentine, and Bela Fleck & the Flecktones leading the way.  We compromise a bit, with the Monkees, Paul Simon, and the Police being common ground.  We made a deal before the trip that, from the time we hit the road each morning thru 11 am, we would listen to my music, and from 11 to 6 pm, we would listen to hers.  From 6 pm to when we stop would be mine again.  This worked well for us, though I ended up getting the short end of the deal when she struggled to get up in the morning and our starts were later than I like.

We crossed into Minnesota at 9:20, and stopped at the Welcome Center.  I perused the brochures for areas of the Gopher State that we would be passing through, and nothing jumped out.  The Spam Museum seemed to be the highlight, but it meant we would have to backtrack to the east a little too far. 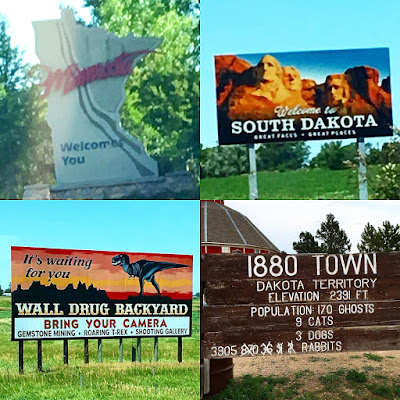 Back on the road, we veered onto I-90, and passed through one construction zone after another, all the way to the South Dakota state line.  Once in SD, one of my favorite states, the speed limit jumped to 80 mph.  That's the fastest legal speed limit I've ever driven.  However, Jeeps aren't really built for speed.  Their ability to go practically anywhere is their appeal.  Cruising along at 80 alongside an 18-wheeler resulted in a violent shaking and vibrating of our hood, which bothered me a lot.  I may look into different kinds of latches for the hood, rather than the stock semi-elastic ones. 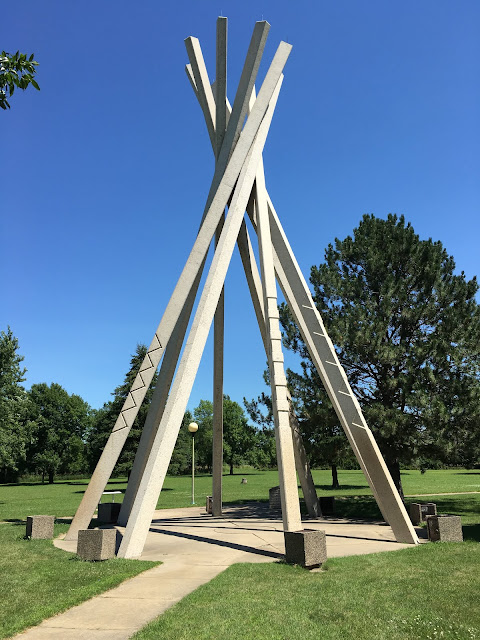 We arrived in Mitchell, SD, at 1:30, and we stopped for lunch at a Ruby Tuesdays.  While it wasn't our first choice, and I didn't necessarily want to do a sit-down restaurant, it was something familiar and we could actually eat light at the salad bar.  It was a good meal, but the place seemed to have a large prevalence of flies. 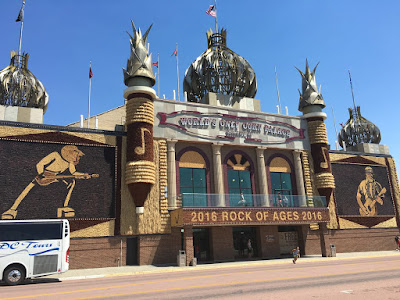 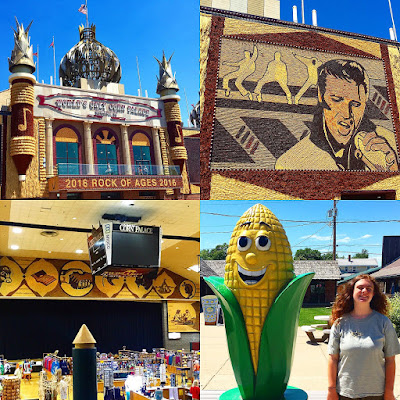 Right down the road is the iconic Corn Palace.  "The World's Only Corn Palace" is Mitchell's big tourist attraction, bringing a half-million tourists each year to see the corn murals along its walls.  It was conceived as a gathering place for the area's residents to enjoy an annual fall festival, a celebration of the end-of-season harvesting of crops.  The first Corn Palace was built in 1892, but was replaced in 1905.  But the second building was soon deemed too small, and the current building was completed in 1921.  It is redecorated each year with different colored corn and a different theme is designed for the murals.

This was my third visit to the Corn Palace, but Melody's first, and we picked up a few souvenirs and traded a few corny puns.  We were back on the road at around 3:30, and we continued west on I-90.  There were a few other touristy stops I wanted to make, but we wanted to get to the Badlands and Wall Drug Store before it got too late.  But we made one more stop, at the 1880s Town, near Murdo, SD, at 5 pm. 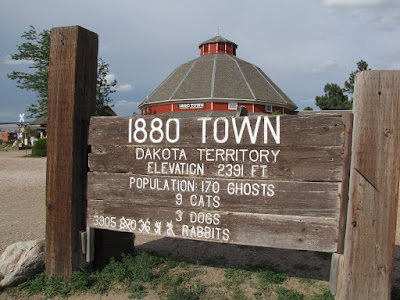 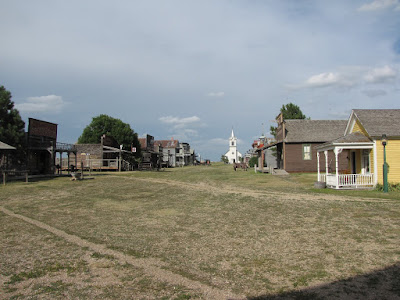 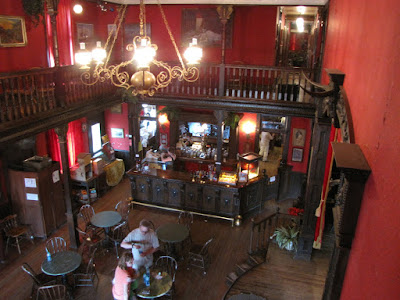 The 1880s Town is collection of authentic Old West buildings gathered from all over the West to form a very cool "town."  Many are unrestored, and look rather rundown, but their authenticity is what makes them so interesting.  Some are some fixed up with furniture and props from the era.  It was fun walking from building to building, exploring them all.  There is a working saloon, as well, and we got something to drink and a snack.  There is also a small museum with props from the Kevin Costner film, DANCES WITH WOLVES. 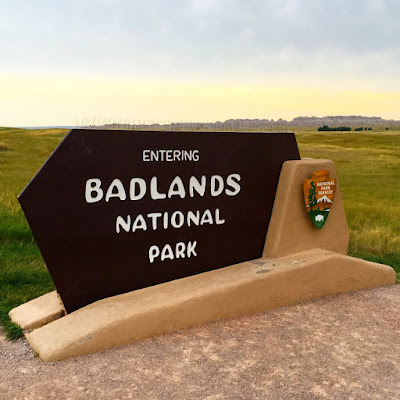 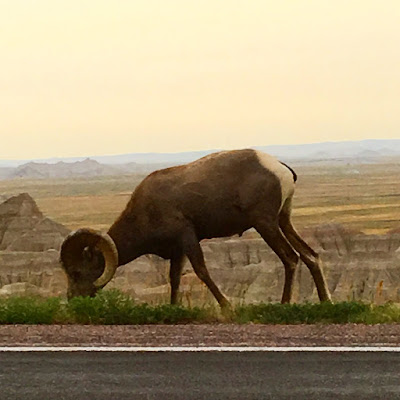 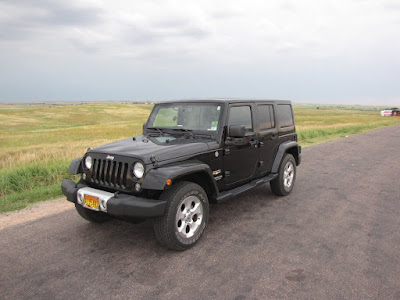 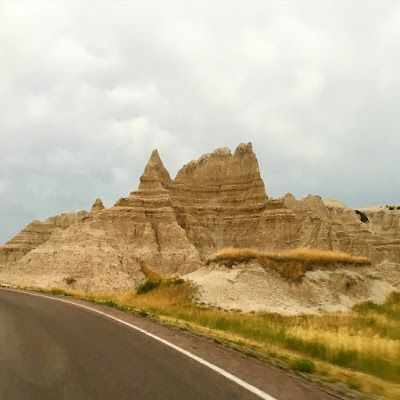 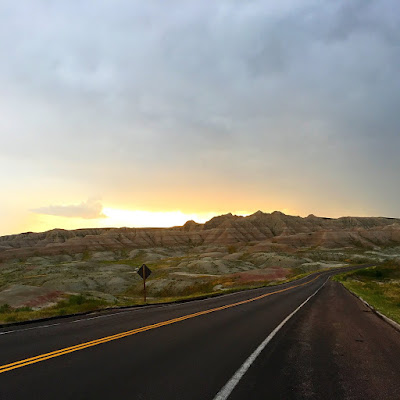 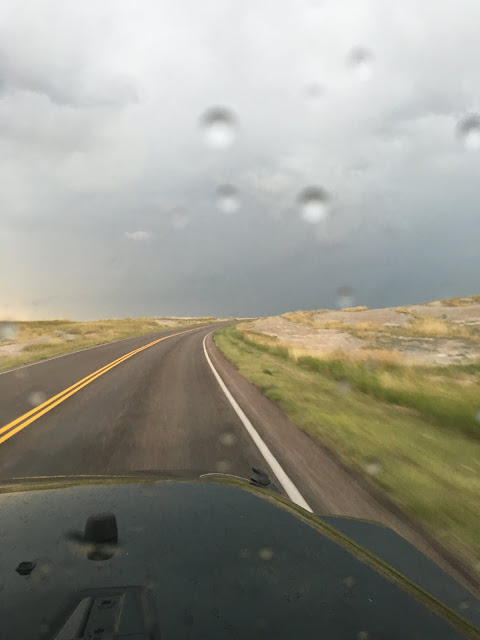 We were back on the road at 6, and anxious to reach the Badlands.  We arrived in less than an hour, and entered the National Park...just as a thunderstorm hit the area.  So it made for a gloomy, if somewhat spectacular drive thru the park.  We were excited to see a bit of wildlife, too, with a couple of bighorn sheep on the side of an overlook.  The storm clouds over the rock formation made for some incredible scenery. 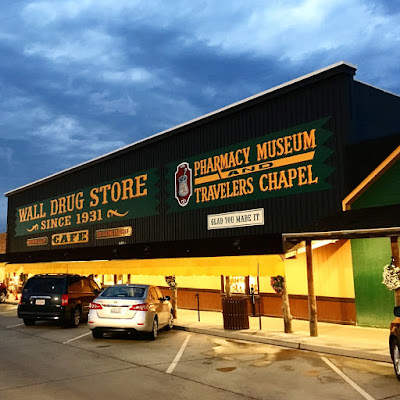 It was almost dark when we left the park, and we headed north into Wall.  We drove directly to Wall Drug Store, the iconic tourist trap.  It is a place I really love.  I don't know what the appeal is, exactly, but the combination of location, era of establishment, food, and memorabilia, just strikes at the road trip enthusiast/tourist in me.

We arrived 15 minutes before the cafe closed for the night, so we got a nice meal (the bison burger is my favorite).  After eating, we walked around a bit, but the entire place was getting ready to close for the evening, so we headed out to the Jeep and drove the few blocks to our hotel.

Wall does not have a large number of hotels, and those it has are not the nicest places.  Our Econolodge is the latter.  It is an old, rundown motel that charges way too much.  I've stayed there before, and should know better.

"You're the best Daddy in the whole world!" - Daughter Melody

Joe: Are you used to this?
Patricia: What?
Joe: The ocean, the stars...
Patricia: You never get used to it. Why do you think I want this boat? All I want to do is sail away...
Joe: Where would you go?
Patricia: Away from the things of man.
- JOE VERSUS THE VOLCANO