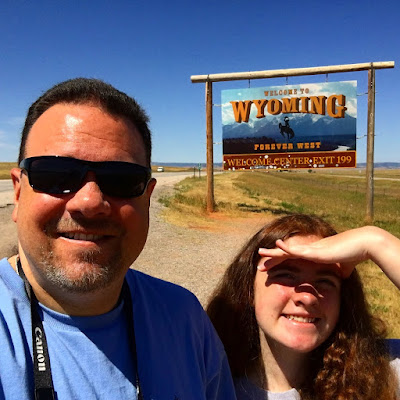 We headed west on I-90 in South Dakota and immediately hit another road construction project.  Road construction seems to be an interminable issue across the country.  We found it in almost every state, miles upon miles of reduced speed limits and stop and go traffic.  It is frustrating because you feel like you can never drive at speed, and you're not making any progress.

We reached the Wyoming state line 11 am.  We decided to stop at the Welcome Center to pick up some brochures and decide if there was anything else worth seeing other than the things we had already planned to do.  The building appears to be fairly new, and there were multiple stations to get information on specific regions and activities in Wyoming.  After exploring the place for about 30 minutes, we got back on the road and headed towards Devils Tower.  For a different view, we headed north onto Rt. 111 to Aladdin, then west on Rt. 24, towards the little village of Hulett. 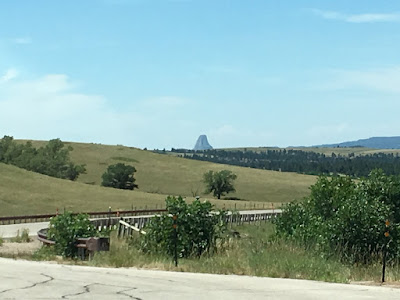 Very soon, we crested a rise and saw the distinctive silhouette of Devils Tower.  It is such an impressive sight!  We arrived at the entrance to the National Monument at about 12:30, and we entered the park. 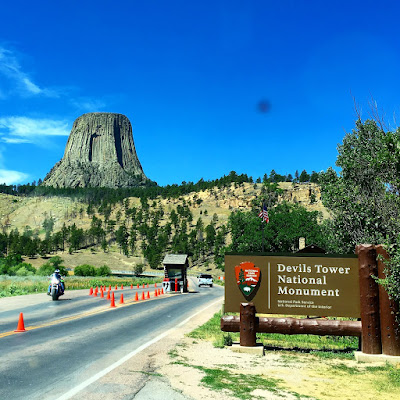 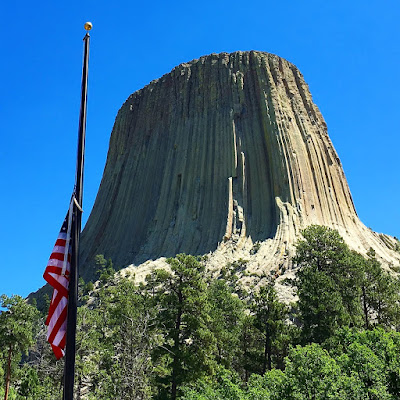 For the second day in a row, the temperature was in triple digits, and once we arrived at the HQ/Gift Shop, we decided that the hike we wanted to take around the monument was not going to be the best idea.  It was just too hot.  We got a few souvenirs, and decided to make a small hike to the base of the monument, then explore other areas of the park.  And we did. 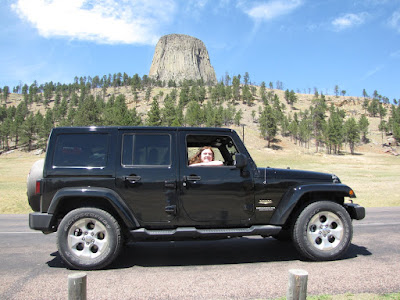 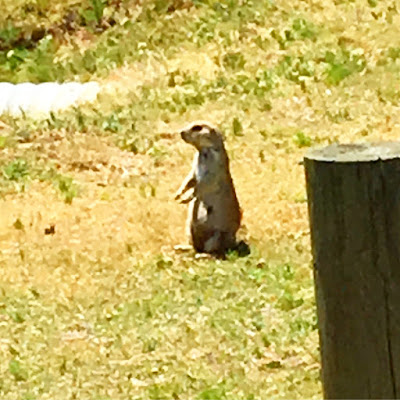 We went back to our Jeep, and drove back towards the entrance, stopping briefly to see the prairie dog farm along the entrance road.  There was a KOA camp store and cafe just outside the main entrance, so we decided to get lunch there.  It was a sit-down place, and they apparently weren't prepared for the number of customers they had.  Our server, who was really nice, told us that their kitchen just isn't very big, so they can only take so many orders at a time, apologizing for the long wait to get our food.  Once it arrived, we ate heartily.  It was a nice, basic lunch.  It was nice to be in a cool place to rehydrate. 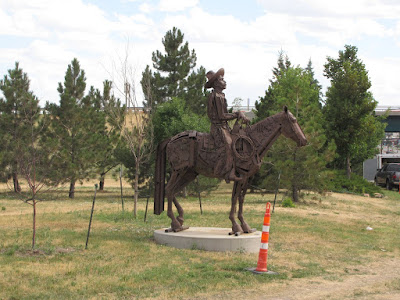 We were back on the road at 2:30, and we began to long trek south through eastern Wyoming.  We went southwest on US 14 to Moorcroft, then west on I-90 towards Gillette, then south on Rt. 59.  It was a long drive on 59, which is mostly upgraded 2-lane road, and occasional passing opportunities.  There also were areas of construction, which meant alternating traffic when one of the lanes was closed to traffic. 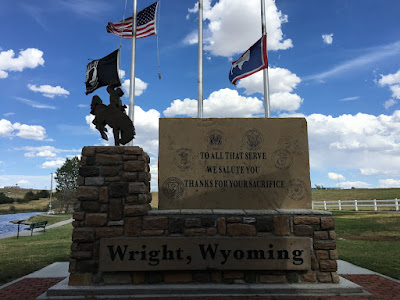 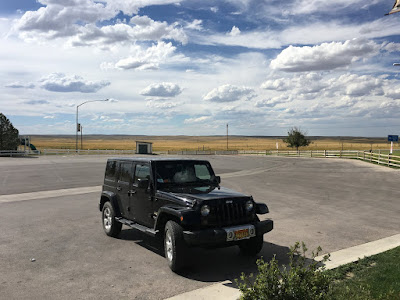 My daughter, Melody, napped for a bit, and I enjoyed the scenery, which is flat and wide-open, providing sight lines many miles in every direction.  We stopped for a break at a rest area in Wright, WY, before entering the Thunder Basin National Grassland.  After several hours, we arrived on the outskirts of Douglas.  We jumped on I-25 south towards Cheyenne, with storm clouds on the horizon. 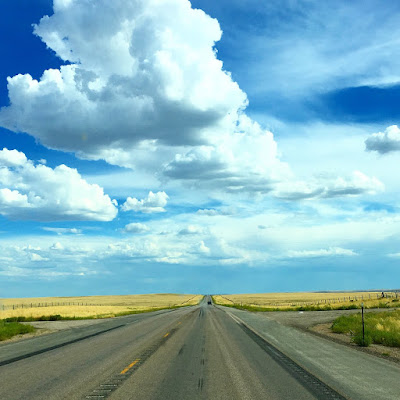 The weather degraded considerably at this point.  The temperature dropped almost 40 degrees from what we experienced earlier in the day, with huge wind gusts.  The Jeep is just tall enough to be impacted by the wind, and I wrestled to keep it in my travel lane as the wind whipped at us at the rather excessive 80 mph speed limit, and rain began falling on us.

We stopped for gas in Wheatland, WY.  The price per gallon at the local Shell was significantly higher than anything we had seen up to this point. Wheatland is just remote enough that perhaps it is legitimate, but when I passed another gas station just up the road at more than 50 cents per gallon, cheaper, I knew I had been price gouged. 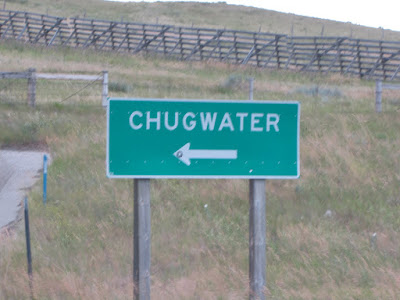 Passing through Wheatland brought to mind the trip my wife and I made through the region back in 2000, on our cross-country trip.  We were headed west and south out of the Black Hills late in the afternoon, and we were anxious to make some distance after spending more time than we planned exploring that area.  It was getting late, and we stopped in Wheatland looking for a room for the night.  Every hotel we stopped at was completely booked.  I asked why, and they told me it was because of Frontier Days, an annual rodeo celebration, in Cheyenne.  We were still over 100 miles from Cheyenne, but due to the crowds and the limited number of hotels in the area, even little Wheatland was filled.  We were told to try the Wheatland Motel, and we ended up getting the last room there.  It was a real dump, and I felt badly for my wife, since this was our one-year wedding anniversary.  All we could do was laugh and make the best of it. 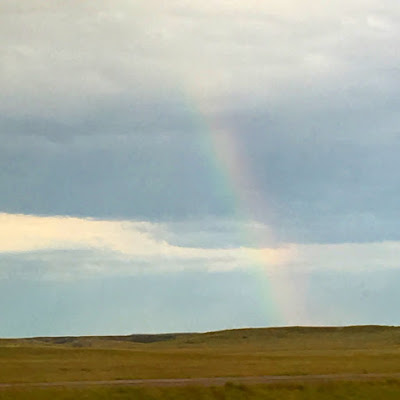 It was starting to get late, and we were hungry.  On the outskirts of Cheyenne, we stopped for dinner at a Taco John.  Despite its unappetizing name, I saw many of these on my travels, and we decided to give it a try.  Our verdict is that it isn't very good.  While I haven't eaten at a Taco Bell in almost 20 years, it seemed to be a step below that. 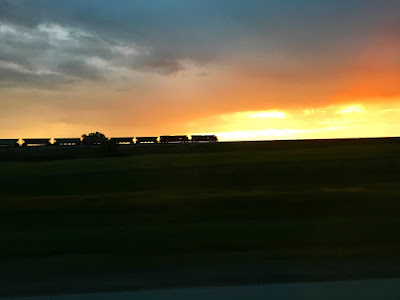 We ate quickly since it was getting dark.  I had determined earlier in the day that we could make it to Estes Park, Colorado, by nightfall, and I made a reservation there.  But we were a few hours later than I predicted, and it would be dark shortly after we entered Colorado.  The good news was that the rain cleared out, and we had a spectacular sky, with a very pink sunset to the west.

Once in Colorado, the traffic picked up a bit.  We soon arrived at Loveland, CO, and we headed west again, on US 34.  Unfortunately, the sun was long gone, and the scenery along this stretch of road was absent to us.  To add to that, as we entered into the mountains, the rain hit us again.  It made for some white-knuckled driving, with lots of switchbacks and darkness compounding things.  I wasn't able to keep up the pace of the local cars who anxiously tailgated and passed us at every opportunity.

We finally arrived at our destination, the Rodeway Inn, in Estes Park, at 10 pm.  It was surprisingly nice, though old and dated.  We unpacked quickly with the rain coming down fairly hard, and soon we were asleep.  I was excited to be in the Rockies, though, and the next day would include some incredible scenery.