“Beauty of whatever kind, in its supreme development, invariably excites the sensitive soul to tears.”
― Edgar Allan Poe 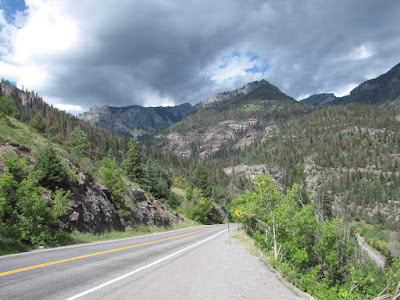 The beauty in the nature of Colorado is like nothing I've seen anywhere else in the United States.  I've always said that every state has a unique look, and having now been to 46 states, I still think this is true.  However, Colorado is unique.  The majestic Rockies with hidden Old West towns around and over huge ridges, the dramatic changes in weather, and the views abounding every bend in the road, makes for incredible beauty, and I literally found myself tearing up as we soaked in every new scene.  It's so hard to put into words.

We were rising up over the town of Glenwood Springs on a small cable car tram, up to the top of a mountain on which stands the small Glenwood Caverns Adventure Park.  The ride wasn't what we expected.  I really thought it would be a short ride, but I missed the caution note plastered to the inside of the small four seat tram that said the tram would stop twice during the ride up while other trams are loaded.  Because it was windy, the trams were buffeted violently when the breezes blew, and because of the altitude, I really wasn't feeling very confident in the strength of the cable that connected our tram to some kind of security, and I fully expected that we would end up falling thousands of feet to our deaths.


The tram continued to climb, the distance well beyond my expectations.  It leveled off a bit, but still climbed gradually, deeper into the mountains.  We glanced down and caught our first view of the track for the mountain coaster, and that calmed our nerves a bit, exchanging them for excitement and anticipation.  The tram slowed as it entered the station at the top of the mountain, and we finally exited the little car.  I felt relief. 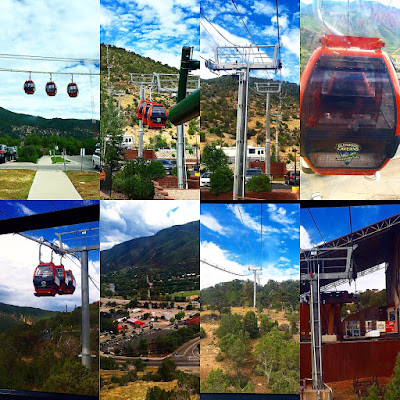 We wandered around the little park, taking in the views, and mixed in with the small crowds of people.  Getting the lay of the land, we tried to determine what we wanted to do.  I finally decided that we would go ahead and get the full-price wristbands, which would allow us to experience all of the rides.  So we did. 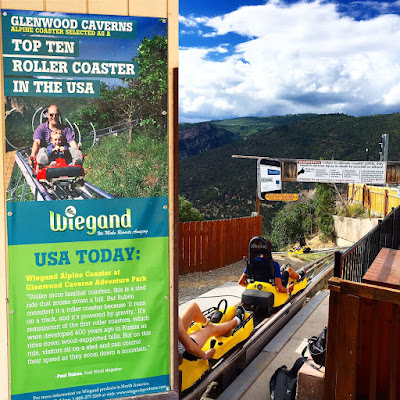 We rode the mountain coaster, which was kind of cool since it worked differently than the ones we had tried in the Great Smokies.  There, the coaster was carried by cable to the top of a mountain, and then rode down the track back to the bottom.  Here, it was already at the top, so the ride began immediately, reaching full speed in seconds.  While it didn't go all the way to the bottom (which might take more than a few minutes), it soon reached the end of its run, and then it grabbed a cable for the long ride back to the boarding station.  It was a pretty good ride.

We explored the rest of the park, and soon found that the wristband deal wasn't necessarily very good.  The roller coaster was closed due to the winds.  The other thrill rides didn't fit our definition of thrill, such as the spinning swing that spun way out over the shear several thousand foot drop of death should it break in some unreasonable accident.  The only ride that we felt comfortable riding, and was operating, was the mountain coaster, and we rode it three more times before yet another thunderstorm rolled in and they shut down all of the rides, including the tram ride back down to the bottom of the mountain. 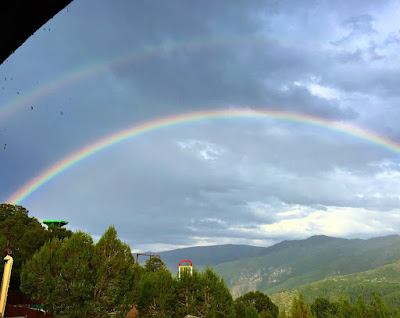 We decided to grab some dinner there at the park while we waited out the storm.  We saw an incredible rainbow in the sky.  It was beautiful.

Soon we got the all-clear, and we hopped onto the tram and rode back down to our Jeep.  We found a hotel for the night using our Choice app, in the town of Montrose, CO, and we began the 2.5 hour drive to dreamland. 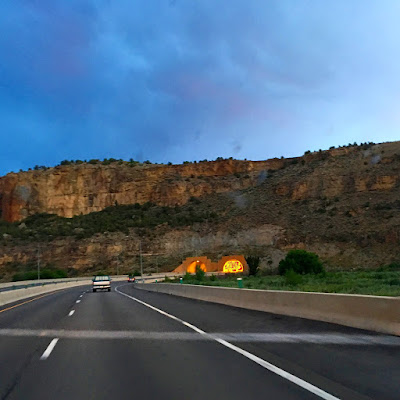 This was almost the halfway point of our trip.  We had been on the road for just over a week, with just over a week ahead of us before we would reach home.  We drove about 350 miles for the day, and we were at 2709 for the trip so far.  I was exhausted, but I couldn't help being excited for what was still to come.  Giving thanks to God for the opportunity, for His safety, and for the beauty of His creation.  What a trip!