In the "you get what you pay for" department, with a vacation to a warm climate coming up very soon, I decided I needed to get my hair cut.  Instead of going to the place I like to go to, which is a little more expensive and many times requires an appointment, I went to a discount chain to get a walk-in haircut.  The result was....well, not exactly what I wanted.  This happens so ridiculously often when I go to this particular place, and I don't know why I go back there.  In fact, the one young lady who has given me three other bad haircuts was in line to cut my hair this time, though I didn't know it was her turn when I told the receptionist I didn't care who cut my hair.  So, as usual, I ended up with a bad haircut.  I guess, if I was getting my head shaved or a crew cut, it would be hard to mess that up.  But my hair, despite graying and thinning, still requires a little bit of work.  So a cheap haircut results in a cheap haircut.

So after a rough day at the office, I came home and immediately crashed and snoozed on the couch.  My daughter, upon finishing her homework, woke me up at around 6 and asked if we could go to Cheeburger Cheeburger.  Since I knew we were going out anyway for my haircut, I agreed.  She really loves Cheeburger Cheeburger, and, admittedly, it's a family favorite.  So off we went.  Tonight I had the turkey burger, topped with pepper jack cheese, black olives, pickles, mushrooms, and honey mustard.  It was very tasty.  My daughter had a craving for the chicken fingers, plain.  I don't know why she doesn't like dipping sauces, like bbq or honey mustard, but she just prefers to have them plain.  She also had a small brownie batter shake, the shake of the day.  Wow, that sounds great!

It was dark when we left the restaurant, and it was extremely foggy.  Since we were headed for Maple Lawn, I decided to go an extreme back way, so we headed down Dobbin Road to Oakland Mills Road, which is kind of a fun drive once you pass the intersection with old Montgomery Road.  As we approached Blandair Park, with all of its lights blazing in the fog, we were provided with an eerie sight.  In fact, we saw a herd of deer outlined on a hillside against the light filtered through the fog.  It was worth getting a picture, though the deer scattered before I could set up the pic.  Here's the result: 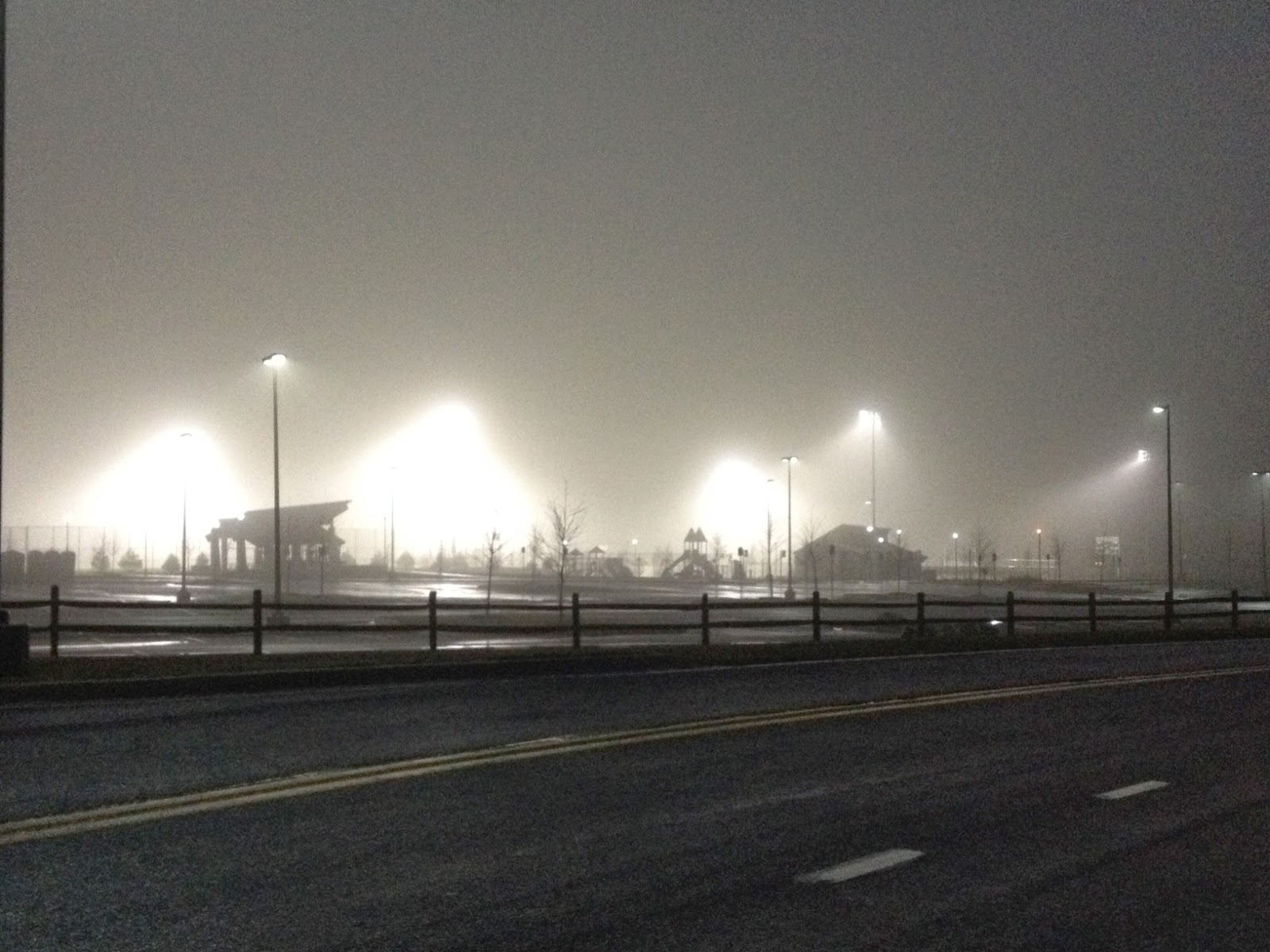 Anyway, it was a nice evening despite the rain and stress of the day.

Hope you're all doing well.  Have a great evening, everyone!