We had a fantastic time in Hollywood!  My daughter, Melody, and I spent our first day at Universal Studios Hollywood, which included lots of cool rides, particularly the new Minions ride (from the movie DESPICABLE ME).  We also enjoyed the studio tour, which featured the Bates Motel (from PSYCHO) and the shark from JAWS.  There was also the earthquake (from the movie EARTHQUAKE), and a special King Kong feature on SKULL ISLAND, which was in 3-D and pretty spectacular.  For dinner, we went to Bubba Gump's restaurant, which was a treat. 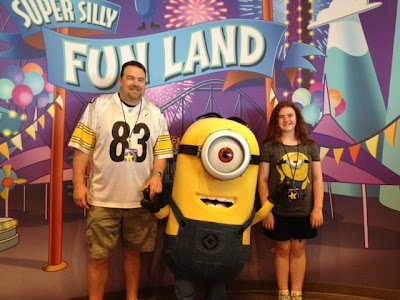 Us and a minion 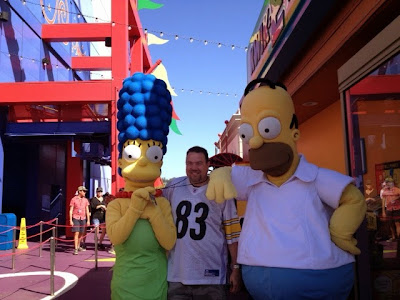 Me with Homer & Marge Simpson 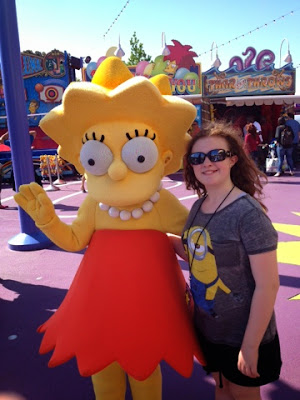 After a really enjoyable day at the park on Monday, Tuesday was spent in a warehouse studio in Van Nuys, where Melody was in the studio audience for a new kid's game show that will be on Nickelodeon this Summer called Web Heads, featuring Carlos Pena, JR, from the show Big Time Rush.  It took about 5 hours to film 2 episodes, and I was able to watch on a monitor and saw her in the audience on TV a couple times for less than a second.  Does that count as a TV appearance?  I think so.

We found a Shakey's Pizza Parlor for lunch.  I used to go to Shakey's when I was a kid in the DC Metro area, but they all closed in the area when I was a teen.  So I was excited, and recognized the taste of the distinctive pizza immediately, even if it wasn't very good. 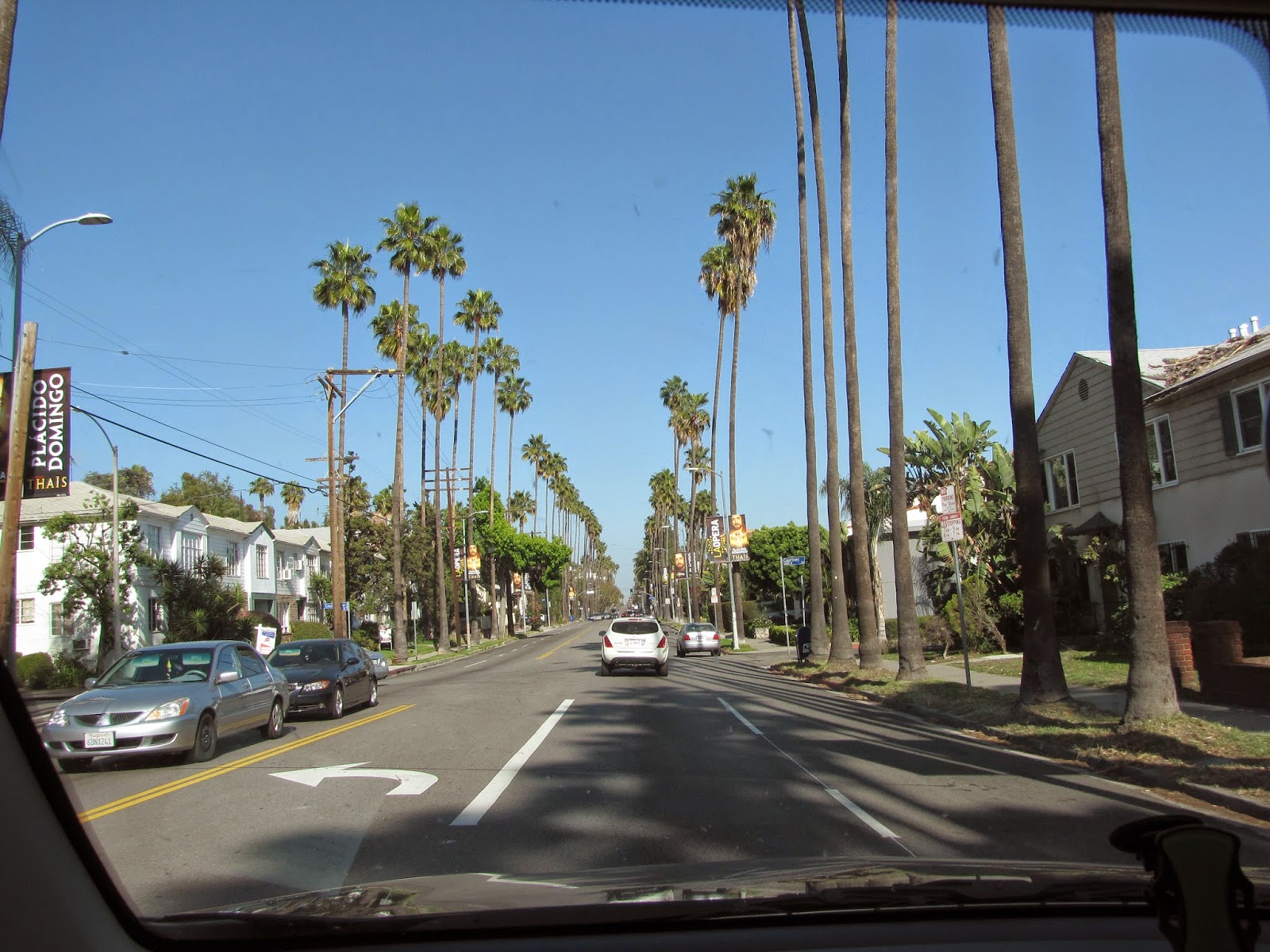 We spent the rest of the day wandering around in Hollywood proper, visiting Hollywood and Highland, a trendy shopping area, and the Hollywood Walk of Fame.  We also enjoyed a great dinner at Mel's Drive-in, featured in AMERICAN GRAFFITI. 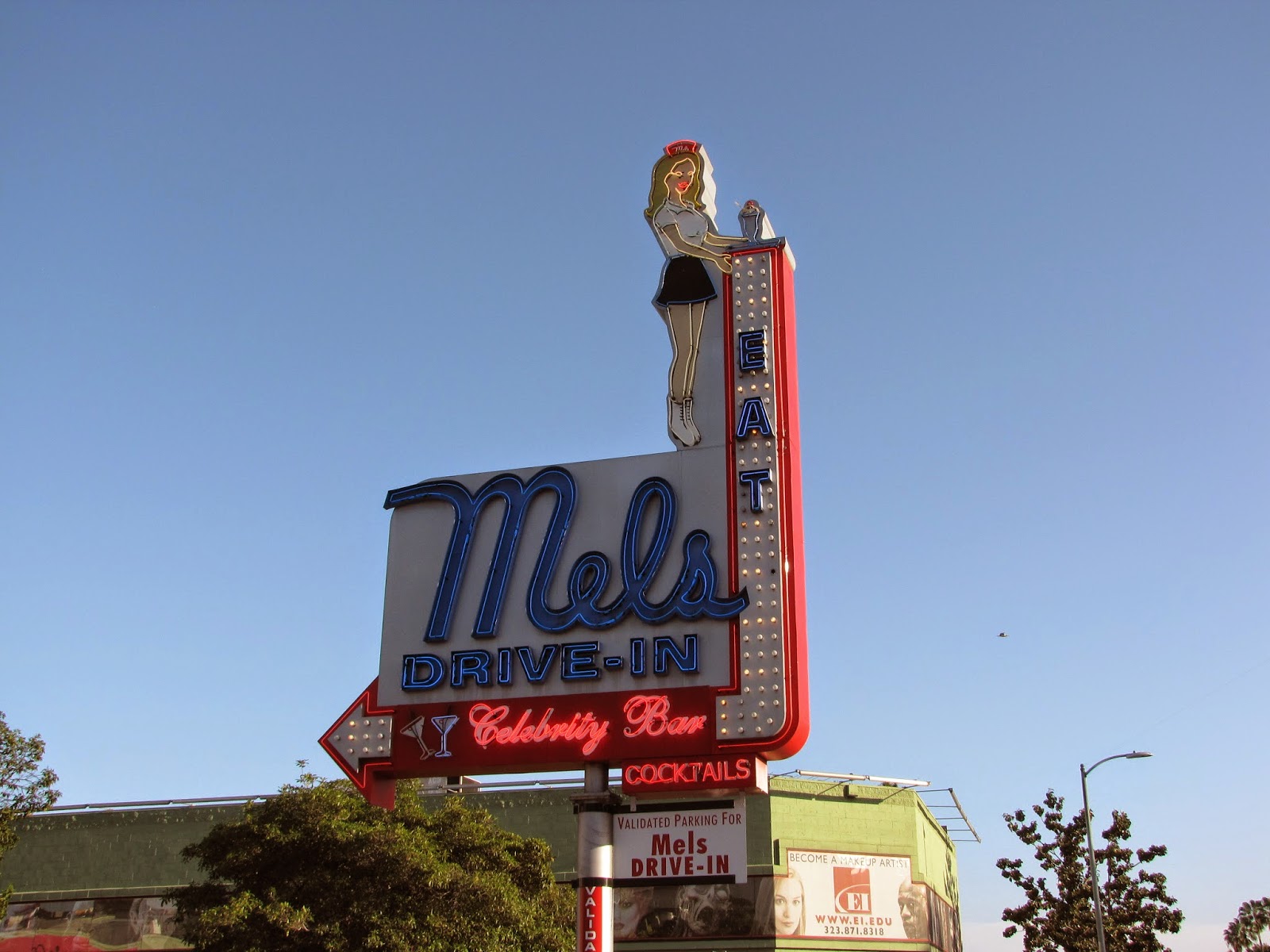 Wednesday was spent at Six Flags Magic Mountain, in Valencia, CA.  We got season tickets, which will allow us to visit other Six Flags parks around the country through the Fall.  The park was a little bit of a disappointment, since it was so rundown and many rides were shut down.  The classic coaster, The Revolution, which is the first modern looping steel coaster, was not running, and looked awful.  This coaster was featured in several movies, including ROLLER COASTER, KISS MEETS THE PHANTOM, and the whole park standing in as Wally World in National Lampoon's Vacation.  The park's newest coaster, Full Throttle, also wasn't running.  Goliath was an awesome coaster, though we waited in line for over an hour to ride it.  Another classic wooden coaster, called Colossus, would've been better if they hadn't turned the coaster trains around and run them backwards.  It resulted in me feeling sick and sore.  The coaster highlight of the day was X2, which is hard to describe.  The individual cars actually turn and rotate as the coaster itself flies around the track.  It was a rough ride, but very cool. 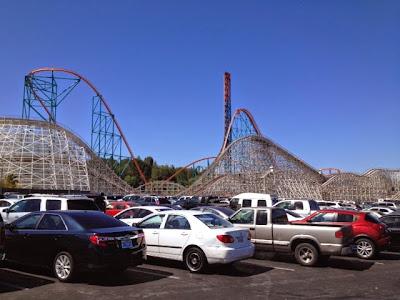 Thursday, our last full day in Southern California, started with a visit to the Warner Brothers Studio.  The tour was great, taking almost three hours, with a visit to the original Friend's coffee shop set, and a stop at the set for Sullivan & Son, starring series creator, Steve Byrne, about a bar in Pittsburgh.  After the tour and purchasing a bunch of souvenirs, we had lunch with our "Hollywood" friend, Alan.  Alan has been playing a lot of small parts for years in many big shows on television, including Frasier, Buffy the Vampire Slayer, Cougar Town, Monk, Suburgatory, and many Disney Channel shows.  He's also a regular on Conan O'Brien's talk show, and has done many national commercials.  Alan and I went to high school together, and he's one of those guys who "made it" in Hollywood.  We ate at the oldest Bob's Big Boy still in operation, which was pretty cool. 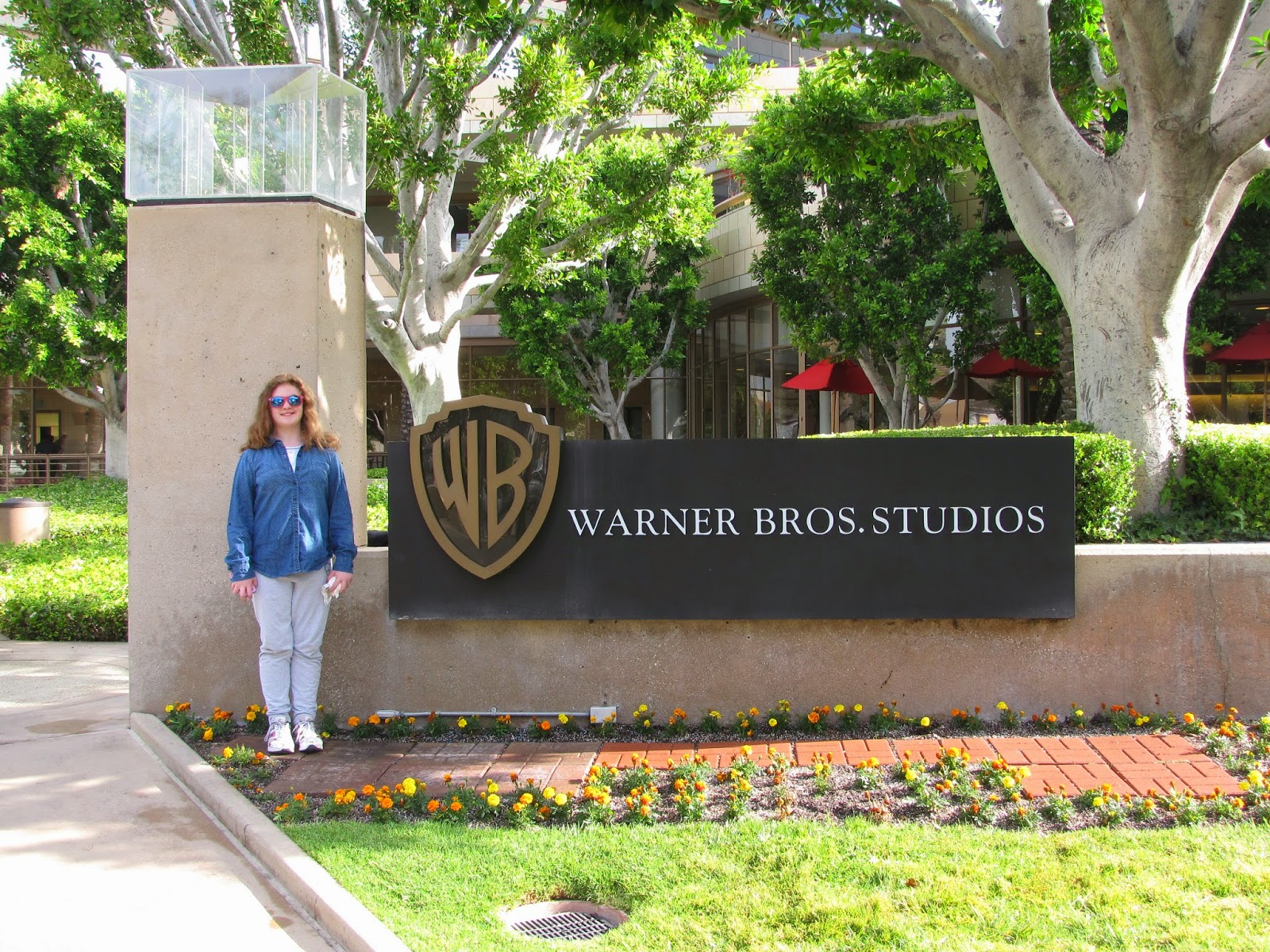 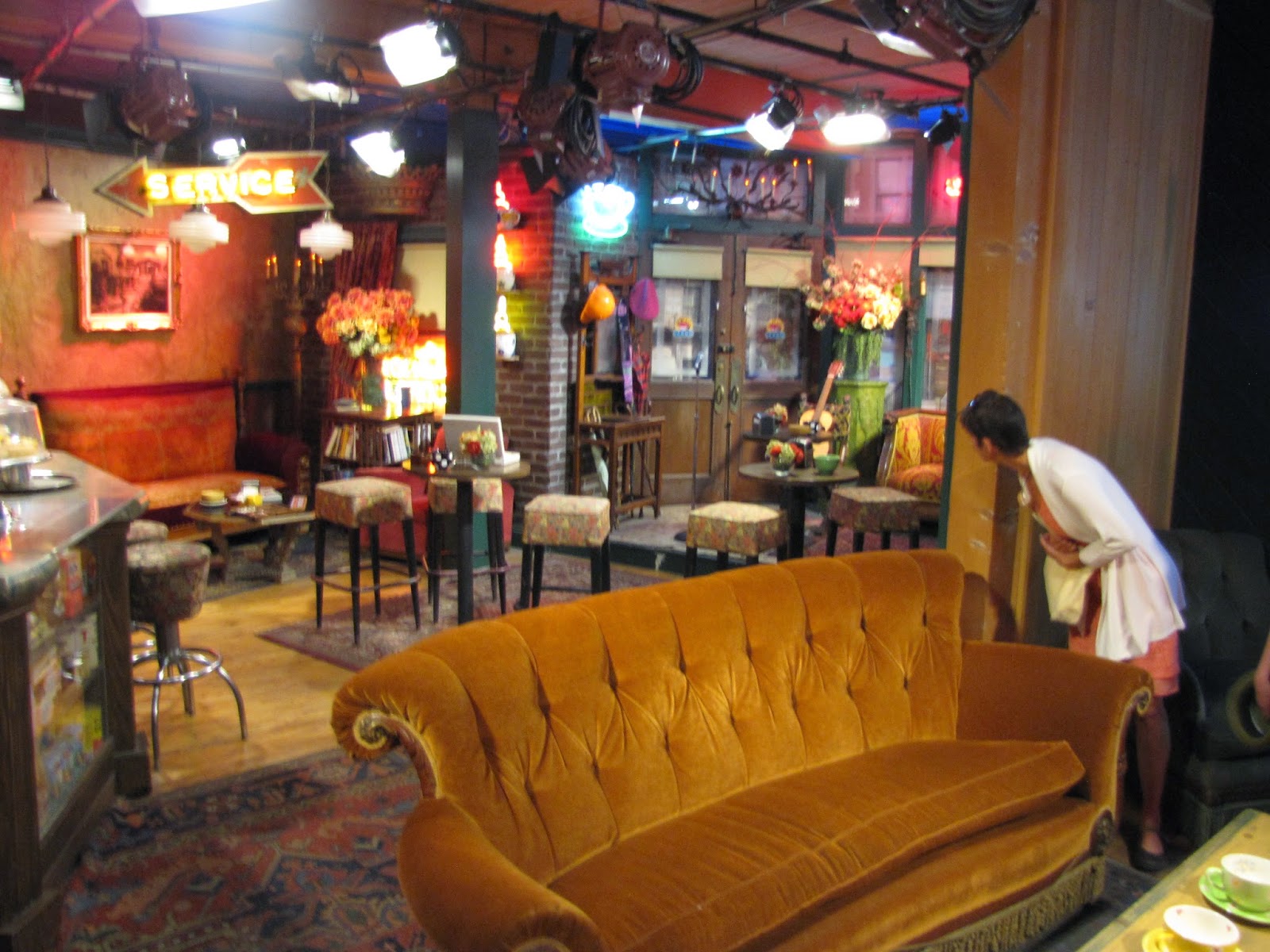 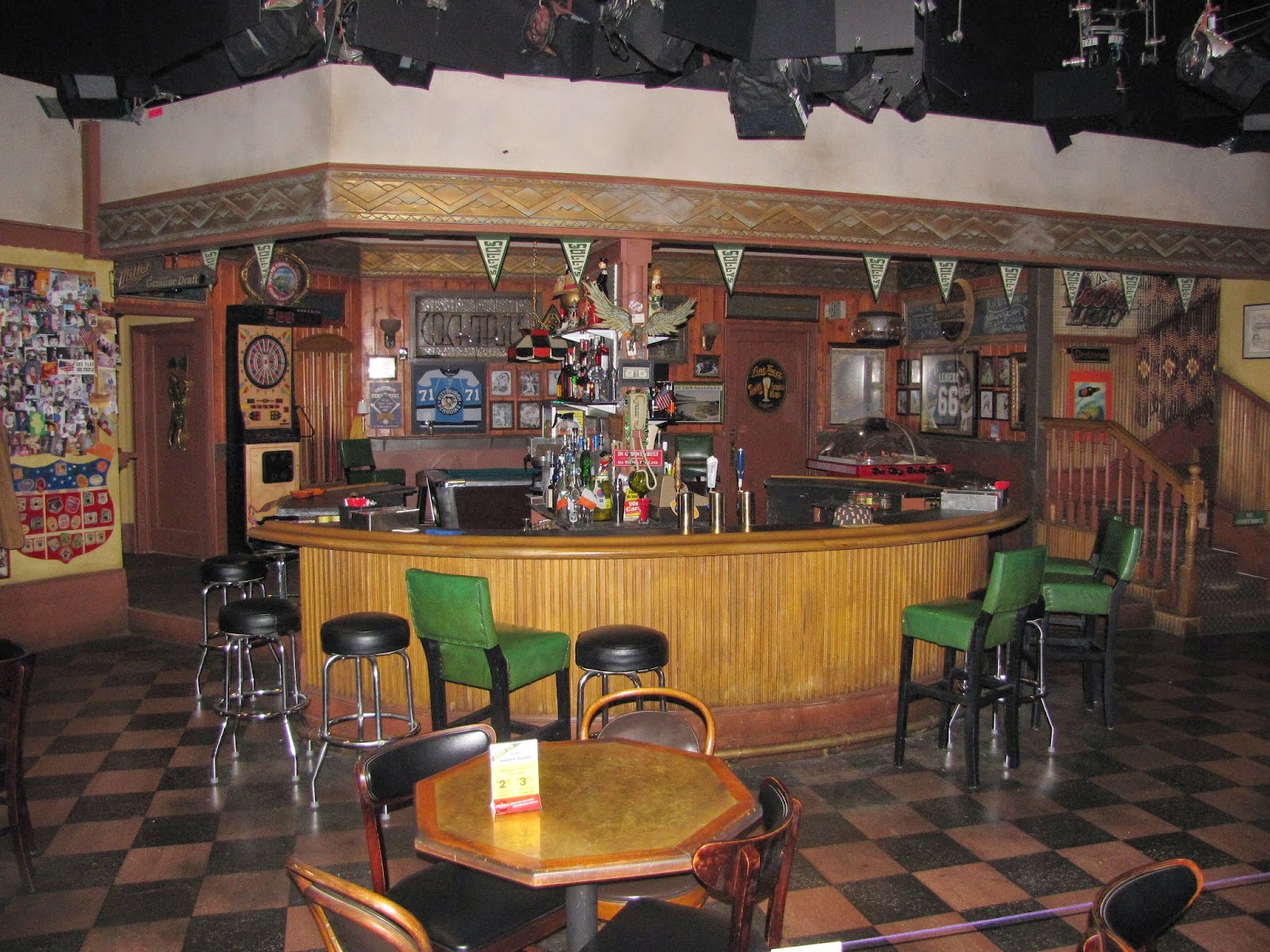 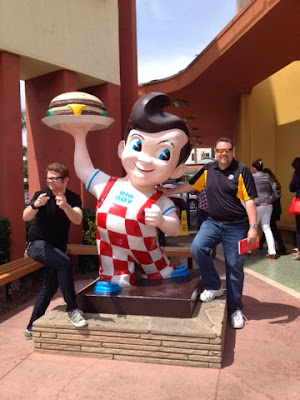 After lunch, we drove by the house featured on the Brady Bunch.  We also drove up to the Hollywood sign, past the Cunningham home from Happy Days (the outside of the house was featured on the show), which was nearby, too. then headed to Santa Monica.  We rode down Route 66 to the end of the route, at the Santa Monica Pier.  Melody touched the Pacific Ocean for the first time.  We then drove back to North Hollywood and had dinner at a great Italian restaurant called Miceli's, where the servers sing in between waiting on tables. 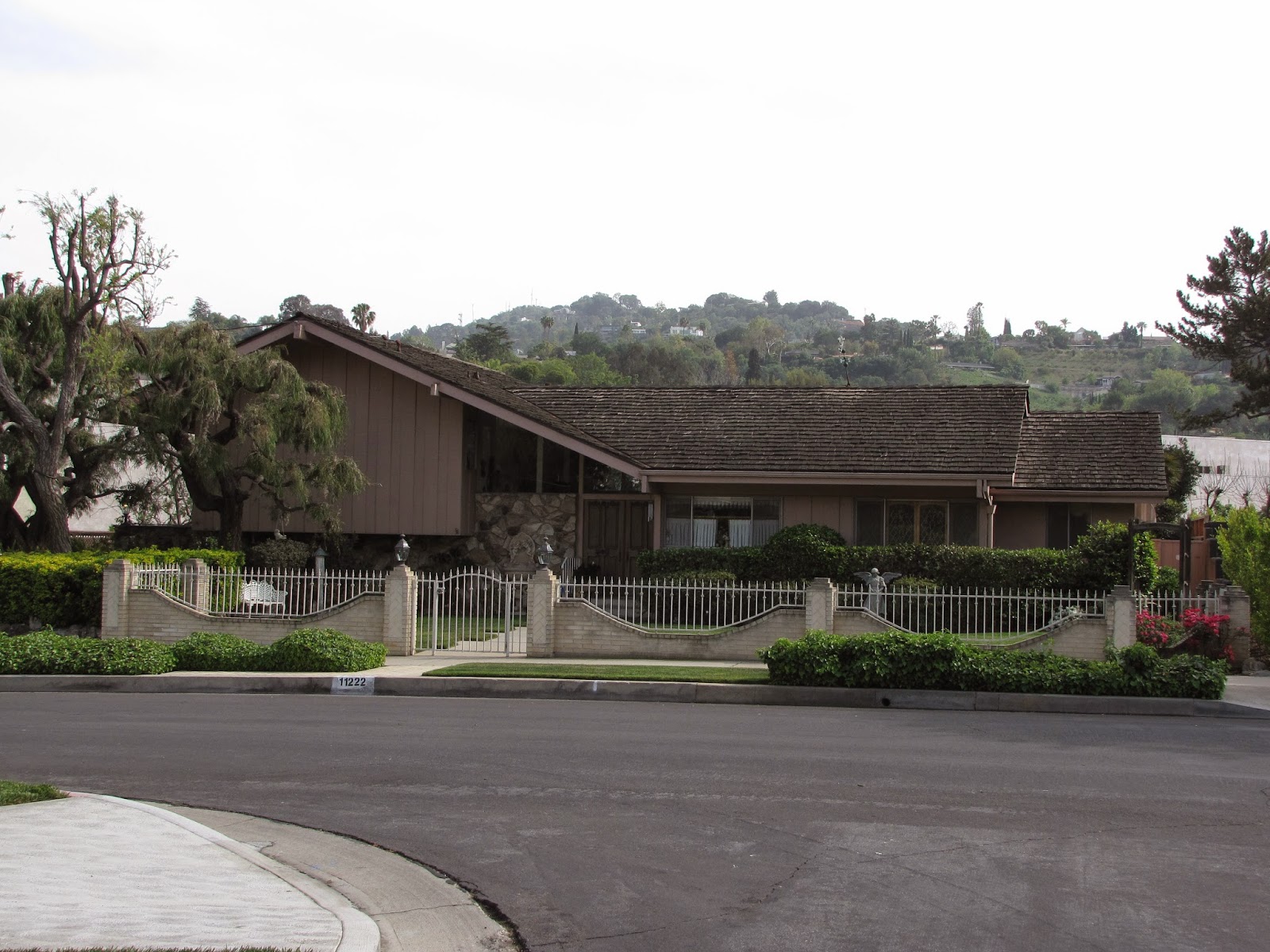 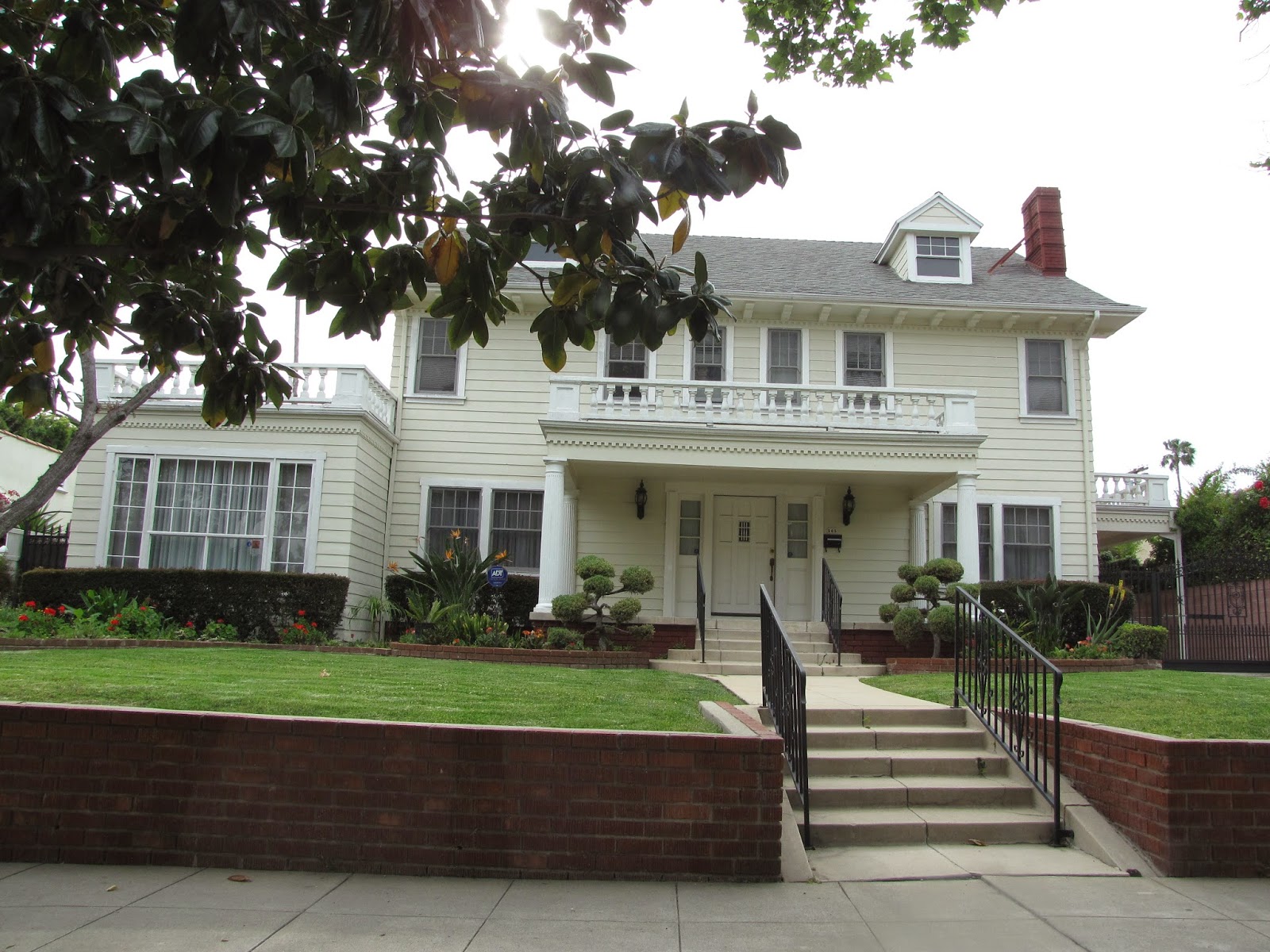 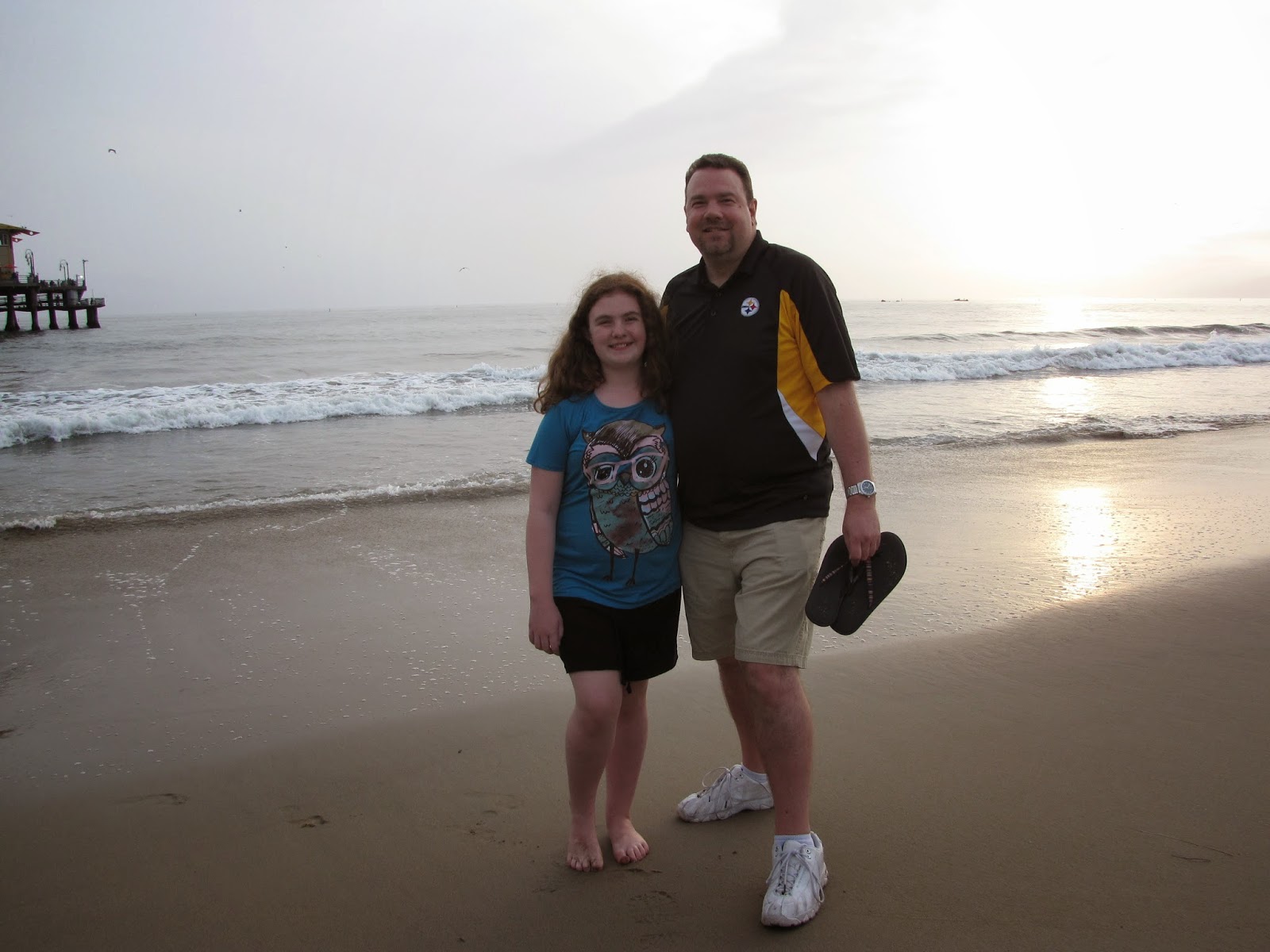 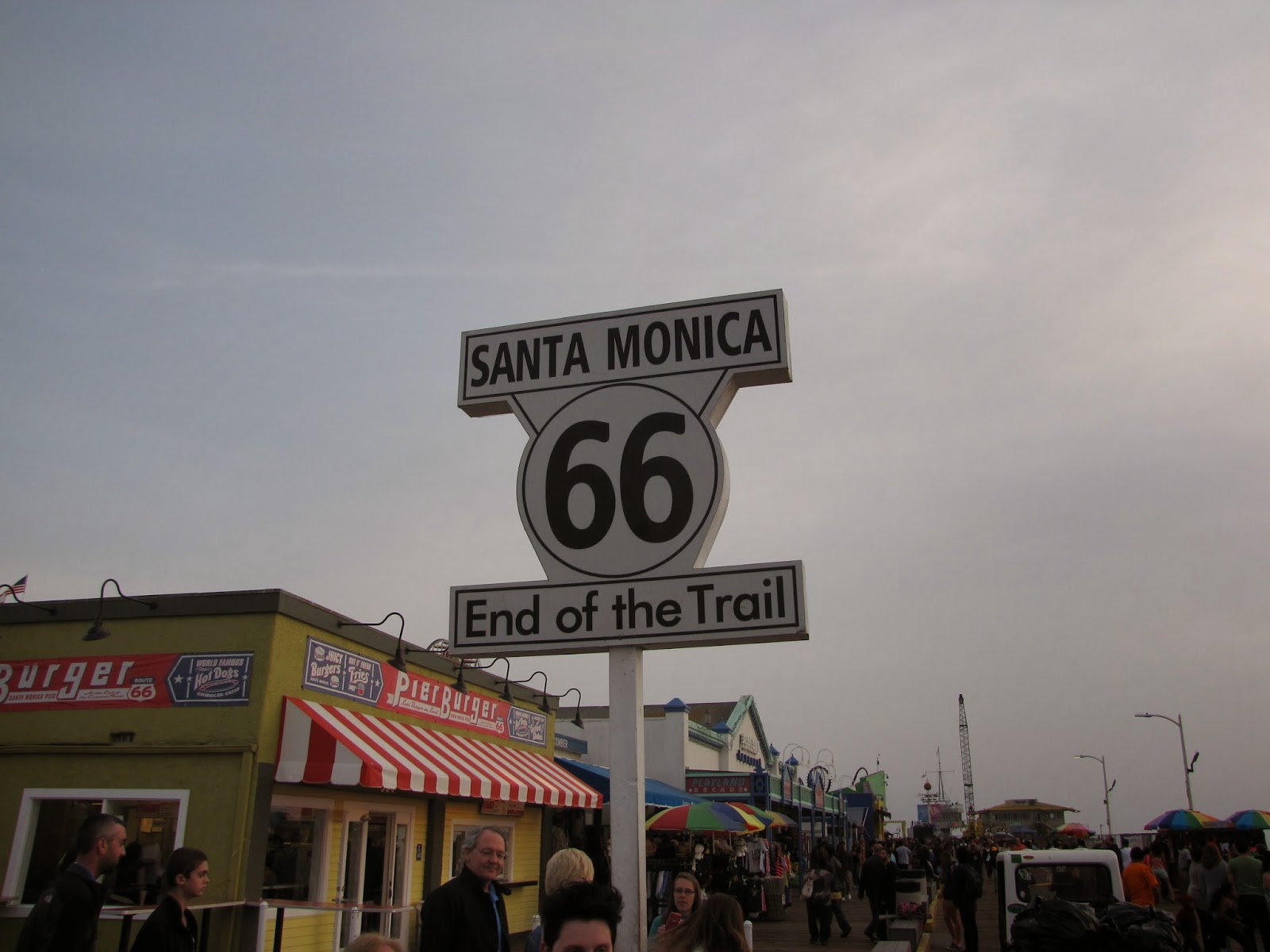 The Western End of Route 66

We crashed at our hotel for our last night in Hollywood before heading out of town.  It was a lot of fun, and my daughter was excited to have spent the week in a special place.