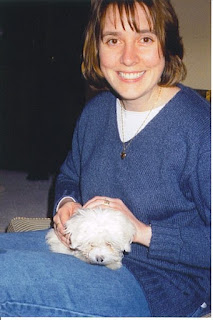 It's hard not to love a cute little white furry Maltese puppy.  Scout is our Faithful Pup.  She is named for the little girl in my wife's favorite novel of all time, TO KILL A MOCKINGBIRD.  Everyone thinks she's a boy, though, since her name is Scout.  She's now eleven years old, and weighs about 9 pounds.  We got her when she was 10 weeks old and all of just a few pounds.  My wife, Teresa, fell in love with her and she was an instant member of the family.  You might say she is our first "child".  After my wife died, Scout became my dog, but I still tell anyone who asks that she's my wife's dog.  She's a bit too girly to be mine.  I love her, even though she's a pain in the neck.  She's reached old age somewhat gracefully, though she has been slowing down quite a bit.  Our walks used to be runs.  Now she just gets the runs, and our walks are long and somewhat tedious, and usually end with me carrying Scout back to the house.  Her hind legs don't always work right, and she hates stairs.  She doesn't like jumping off the couch anymore, preferring to just bark at me until I lift her to the floor.  She still has a killer bark, but she gets scared by loud noises.  In fact, when she has gas (which is much too often anymore), she hasn't figured out that she's the one making the noises, and she looks around and barks as if it's coming from somewhere else.  She snores louder than me, which is saying something.  I have to wake her up multiple times every night or else I don't get to sleep.  When it's time for bed, she knows it, and she tries to get me to take her upstairs with me every night.  She has her routines.

Scout still thinks she is supposed to go with us whenever we leave the house, even though she actually only goes with us about 2% of the time.  When she does get to go with us, she barks continuously until she gets in the car, and then she shakes nervously for the first 15 minutes until she relaxes.  When she stays home, we place her in the kitchen with her "pooch pads", which she uses liberally, and the kitchen floor.  I always have a mess to clean up when we get home.  She even uses the floor when she gets mad at us for not giving her the attention she wants.

Seven years ago, my daughter and I were having a typical quiet evening.  She was two years old, and talking on the phone with my parents.  I walked into the kitchen in my bare feet (I usually wear socks around the house, but not tonight, for some reason).  About three steps into the kitchen, I hit a "slick" spot on the floor which sent me flying.  My foot slipped out, sending my body into the air, and I landed on the floor, slamming all 200 pounds of me into my left shoulder.  I was in immediate pain, but I had knocked the wind out of me and I couldn't make a sound.  My daughter was still on the phone with my parents in the living room, oblivious to what had happened.  I tried to make a sound, but all that came out of my mouth was a soft grunt.  I could feel a damp spot growing on my legs and realized quickly that what I had slipped in was caused by our lovable little Faithful Pup Scout, and it was now all over my legs.  I finally caught my breath, and I called for my daughter.  She finally heard me and came in.  I told her to tell my father that I had fallen and hurt myself pretty badly.  She relayed the information to my dad, which generated a bunch of questions that Melody just couldn't keep up with.  I finally had to take the phone and I told my parents what happened.  I kept them on the line while I attempted to get up.  Once up, I assessed the damage.  I definitely broke something, either my arm or shoulder.  It wasn't an emergency, but I definitely needed medical help.  Dad elected to come over and take care of Melody, if I thought I could drive myself to the hospital.  That sounded doable to me, so while he drove over, I tried to clean myself up.  I still had Scout's mess all over my legs, and I knew I needed to jump in the shower.  Getting undressed was next to impossible, but I got it done.  Dad arrived and I went to the ER at Howard County General.  Yup.  Broken shoulder.  My stupid dog broke my shoulder.  Dumb dog.  Man's best friend.....right.

But we love little Scout.  She is a good little dog.  Everyone loves her.  All of the neighbors know her and wave to her as she fiercely barks at them from the kitchen window.  Every morning, when I get up, Scout rolls onto her back and awaits a belly rub.  She won't get up until she gets it.  I know she's nearing the end of her days with us.  But she will always be our little mutt.  She's a wonderful companion and a great comfort to me.  I'm blessed to have her. 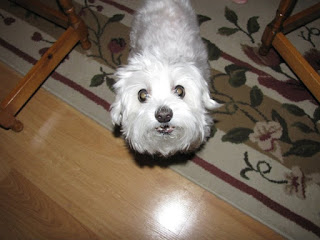