What's That White Stuff Outside? (I Don't Know....I'm a Stranger In Town) 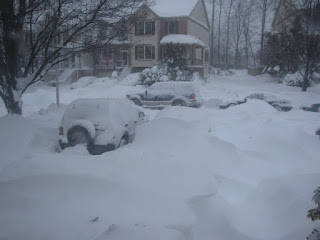 I am a Winter person.  That means I like snow.  I don't know how to explain this to people who don't like snow...they just can't understand it.  And maybe I would feel differently if it snowed around here all the time. But it doesn't, and I miss it when the weather is cold enough for it to snow and it doesn't, or it's just not cold enough and we get a soaker of a rain storm.

Tonight, there is great anticipation since the forecast is calling for more snow tonight and tomorrow than we've received in the past two Winters combined!  I probably should know better than to get too excited about this snow, since we've had these kinds of forecasts before, and we continue to be disappointed (I say "we" since Melody tends to take after me & her Mom and wants to see snow, too!).  But the forecasters seem pretty definite about this one.  We could get anywhere from 4 to 10 inches!  And we're hoping we'll get enough snow to shut everything down tomorrow and we'll get a fun day at home.

These late-Winter storms tend to deliver a big punch, with significant snow amounts.  I was thinking about a few of the big snows we've had over the past ten or so years.  The 2003 President's Day snow storm was significant to us.  I had planned a surprise getaway for Teresa and me, since we had a 3-day weekend (hers was a 4-day!).  The only thing standing in our way was a monster storm that was due to hit the area later in the weekend.  I came home from work early on that Friday, surprising Teresa.  I told her to pack a bag and we hit the road, dropping off Scout at Mom & Dad's.  It just so happened to be Valentine's Day, too.  I took her over to the Eastern Shore and to Dover, DE, where we played the slots at the casino there.  We went out for a romantic Valentine's Day dinner (multi-course, with dessert!).  Then we had a very nice evening at our hotel.....In fact, we were fairly certain that little Melody was conceived on that little romantic getaway.

The next day, it began to rain pretty hard, and it was very cold & windy.  We drove to Rehoboth, then down to Ocean City (we stopped at the Boardwalk for Fisher's popcorn and a few other goodies), before deciding to head for home.  The weather took a downturn on our drive home, with blizzard-like conditions, and we were happy to have our Jeep Cherokee, as the 4-wheel drive came in handy.  We finally arrived home as it got dark, and by morning we had a Winter Wonderland!  There was at least a foot of snow on the ground, and no let-up in sight!  By the time the snow finally ended, there was almost three feet on the ground, and schools were closed all week.  I only worked one day that week.  It turned into one of those fun weeks where we just got to sit around all day and enjoy each other's company (I'm sure there were a lot of babies conceived at the time!).  Hmmmm....maybe that's why I love the snow so much.....ahem.