At the age of two, my daughter was a fan of HAPPY DAYS.  It probably helped that I was a big fan of the show and we watched it together every afternoon after I got home from work.  I'm sure she didn't understand everything that was going on, but she quickly learned who all of the characters were.  So, when I got a postcard in the mail from a collector/promoter advertising that Anson Williams and Donnie Most would be attending a signing at the Montgomery County Fairgrounds on an upcoming Saturday, I knew we had to go.

Dad and I took little Melody to the fairgrounds, rounded a corner, and there they were:  Potsie and Ralph!!! There were very few people there, so we had them to ourselves, and they very graciously allowed us to fawn over them, take pictures, talk about the show, and just generally be foolish fans.  And Melody knew who they were, even if she didn't say anything to them. 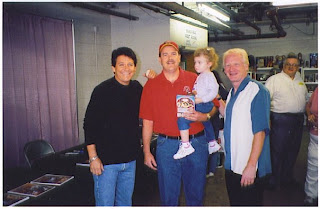 Our experience with the Happy Days Gang led me to look for more opportunities to take Melody to meet celebrities.

Melody loves listening to the Monkees music, and we always take a few Monkees CDs with us in the car on road trips.  When she was three, Aunt Jody let us know that former-Monkee Peter Tork was going to be in Greenbelt on Labor Day for a concert with his band, Shoe Suede Blues.  I told her we would be there!  Aunt Jody's friend was in charge of entertainment, and Jody figured we may get a chance to meet Peter.

We arrived in Greenbelt to a thunderstorm, but the show was going on anyway and we rushed over to the stage.  Unfortunately, we had been given the wrong time for the Shoe Suede Blues set, and we missed their performance.  Peter had already returned to his hotel.  Jody realized that we had missed him and took us over to her friend.  Her friend, upon hearing that Melody was such a fan of the Monkees, immediately called Peter, then told us to go to his hotel and he would meet us in the lobby.

Melody, Jody, and I hopped in the car and rushed over to the hotel and went into the lobby.  Within 5 minutes, the elevator door opened and out walked Peter Tork!  He came over and chatted with us, then spent about 10 minutes of one-on-one time with Melody.  She was just a bit shy, but they looked at some old pictures (from a book about the Monkees that we had brought along) and autographed to Melody.  He was really great and we had a nice visit with him.  Melody seemed pleased with the experience, but she didn't think of it as anything but a normal thing to meet a celebrity. 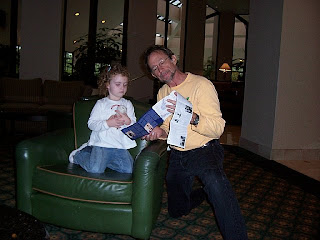 We were fortunate enough to catch a Monkees reunion concert a few years ago for what ended up being Davy Jones last tour with the Monkees (Micky Dolenz & Peter Tork) before his untimely death last year.  The concert was really great, though we didn't get to meet any of them this time.

Now we're looking for more celebrities to meet. Hopefully there will be a few actresses I had crushes on next time.
Posted by Eric Freed at 8:53 PM