My all-time favorite TV show is HAPPY DAYS.  It aired at just the right time to become a major influence on my life.  In fact, the setting of the show, which was during the mid-50s, convinced me that perhaps I grew up in the wrong generation, though I know now that the show had a very simplified and innocent version of the era.  However, it was the cast that really made an impact on me.  Ron Howard's lead character, Richie Cunningham, became quite an influence on my life.  He was a good kid who honored and respected his parents, was always the voice of reason and always did the right thing, and was looked at by his friends as a leader and role model, except when Arthur Fonzarelli - The Fonz (Henry Winkler) - was around.  The Fonz was the cool guy who had it all together, was respected for his toughness, and got all the girls who would do anything for him for a date, or even a kiss.  And all the guys, including Richie, would go to Fonzie for his advice.  The truth, though, is Richie was really the one who Fonzie respected, and their mutual respect led to a deep unlikely friendship between the two characters.  This dynamic made for a great show.

The supporting cast is what made the show awesome, though.  As much as Richie and Fonzie garnered all of the attention, it was their gang of friends and the Cunningham family that rounded out the show.  Potsie Webber (Anson Williams) and Ralph Malph (Donny Most) were Richie's friends.  I wish I had friends like them.  Richie's parents, played by Marion Ross and Tom Bosley, were the parents everyone wanted as their own, and were as involved in their kid's lives as they could be.  Erin Moran, as Richie's sister, Joannie, was the typically bratty kid sister who tried to live up to the example of her brother but never could, and looked up to him anyway.  HAPPY DAYS also had several adult characters who the kids respected overall, but enjoyed making fun of when they could, like Arnold (the hilarious Pat Morita) and Al (Al Molinaro), the proprietors of the main hangout, Arnold's Drive-in.

HAPPY DAYS also introduced a boatload of other characters who became stars in their own right, like Chachi Arcola (Scott Baio), Laverne DeFazio (Penny Marshall) and Shirley Feeny (Cindy Williams), who went on to star in their own highly rated show, LAVERNE & SHIRLEY, and one of the funniest comedians of this era, Robin Williams, who played the alien from another planet, Mork from Ork, and who would star in another spin-off, MORK & MINDY.

HAPPY DAYS remained a highly rated show for most of its run, despite losing it's main character, Richie, about two-thirds of the way through it's 10 year run.  Ron Howard wanted to pursue film-making, and, in my opinion, HAPPY DAYS lost its main dynamic.  Fonzie had surpassed Richie in stardom and fan appeal sometime before this happened, but after Richie left, the show changed, and not for the better.  Fonzie had lost his best friend, the character he could bounce off of.  The show was fortunate that it had such a large following and such rich supporting characters, because it remained a hit until it ended.  But the episodes after Ron Howard (and Donny Most, who left at the same time as Howard) were not as good. 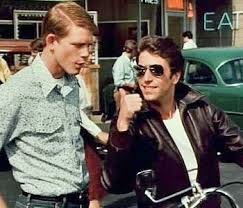 The show continues in syndication on a daily basis, so I get my HAPPY DAYS fix, and I love that my daughter, who I exposed to the show when she was two years old, will watch it with me.  We had the great honor of meeting Donny Most and Anson Williams in 2005 at a promotional appearance, and enjoyed the opportunity to talk to them about the show.  HAPPY DAYS remains such a sweet-hearted show.  There's nothing on TV nowadays like it.  And, as popular as Fonzie was with viewers, I didn't want to be like him.  I wanted to be like Richie.