Wanderlust - On the Road With God

One of my favorite moments in my roller coaster life was in November 2004.  It was just over six months after my wife passed away, and I had just received a promotion into my first management position at work.  Before I started that job, I had planned a get-away vacation to Southern California so that I could drive the last bit of Route 66 that I hadn't driven yet and basically clear my head of all of the grief that had flooded my life since Teresa's death.  I was by myself, and I had rented a convertible for the drive across the Mojave Desert.  Following that, I had planned to spend a night in Las Vegas, see a show, then head right back to Los Angeles the next day before flying home.

There is something to be said for getting away from it all, especially if you have the luxury to get away from not only "the things of man", but man (all people), himself, too.  I had taken similar trips before I ever got married, and found them to be some of the most profound times of my life, and, at least for me, it provided the opportunity to spend some time just with God.  I found that I could actually have conversations with Him while I was driving down the road, and that feeling of just the two of us, cruising down a ribbon of road in the middle of Nowhere, USA, had quite an effect on me.  Whenever I want to have that feeling, which comes over me at obnoxious, sometimes stressful, times in my life, I just want to be out there again, and I start planning a trip.  I call this feeling The Wanderlust.  It's a longing to be out on the road, heading to somewhere possibly unfamiliar, and enjoying the stress-free moments of getting away.

Though the sun was beating down on me that day, there was still a slight chill in the air.  I had the top down, anyway.  I had paid a little more for renting the convertible, so I was going to use it, as long as it wasn't raining.  I had just left the town of Barstow, which is kind of a crossroads at the western end of the Mojave, and I headed east on old Route 66.  The first chunk of the old road paralleled the interstate, so the sounds of the 18-wheelers were fairly prominent.  Also, the road itself had a bit of a patchwork surface to it, and the car, a beat up Chrysler, didn't seem to like the bumps very much.  The shocks were very springy, and it felt like I was actually bouncing down the road.

Things eventually smoothed out as the road began to drift southeasterly away from I-40, just outside of the village of Ludlow.  I was really out in the desert at this point, and there were no other cars on the road.  There were train tracks that roughly paralleled the old road, and I saw the occasional train pass by, horn roaring its approach.  But as I drove further down the road, the familiar feeling of God's presence came over me, and while I was all by myself out there in the middle of the desert, and at times I knew I must be the only living person for miles around, I never felt like I was truly alone.  God brought such a peace to me, and I actually felt a tear or two as I looked around at the beauty of the desert, mountains way off in the distance, the blare of a train echoing across the valley in front of me....  It was truly one of those God-moments.  I stopped the car right in the middle of the road, got out and stood on the useless double yellow line separating the opposing lanes, since there were no other cars in either direction.  I could see for several miles in every direction.  I turned in a circle to take in the moment, experiencing the beauty of the American West, God's creation, inhaling the fresh air and embracing my aloneness (not loneliness).  I took several pictures, hoping to somehow capture this profound moment, knowing a picture could never capture what I was feeling just then.  I sat back down in the car and thanked God for that moment, for my family, for my friends, for my career, for my health, for my wonderful little daughter who was about to turn 1 year old just a week later....for my life. 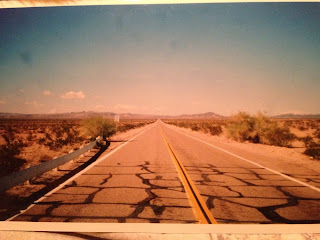 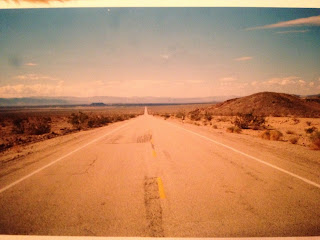 I headed back down the road again, continuing to my turn off, just past the little town of Goffs, CA.  I had completed all of Route 66 at this intersection.  The same intersection I had reached from the opposite direction with my wife only 4 years prior.  Then I headed north on US 95 towards my next destination, Las Vegas, a thing of man.