That Thing You Do!

Tonight I'm watching #22 on Eric's Favorite Movies List, THAT THING YOU DO!  I just purchased the Director's Cut on Blu-Ray.  We made it about half-way through the movie before calling it quits for the night.  It's only Thursday and we still have to get through tomorrow, and tomorrow starts at 5 a.m. for me. 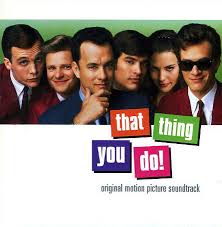 THAT THING YOU DO! is written and directed by Tom Hanks, and stars Tom Everett Scott, Jonathan Schaech, Steve Zahn, and Ethan Embry, as the Wonders, a 60s rock band that scores a big hit with the title song, but becomes a one-hit wonder after reaching stardom.  Liv Tyler, Charlize Theron, and Giovanni Ribisi round out the cast, with Tom Hanks also starring as a record producer.

It's a feel-good movie about a bunch of likable guys, who remind me as sort of a cross between the Beatles and the Monkees, with a very catchy hit record, and it really struck a chord with me the first time I saw it.  The Director's Cut adds quite a bit to the movie, with lots of extended scenes and fleshing out of characters, particularly Charlize Theron as drummer Tom Everett Scott's flakey girlfriend.  Scott is superb as the lead, and reminds me a lot of a young Tom Hanks, which I think is intentional.  Liv Tyler is such a great girl-next-door.  I really love the early scenes in the movie of a 60s small-town Erie, PA, when life just seemed so much simpler and innocent, and everyone hung out at the diner to eat breakfast.  I think I could've been very comfortable living in that generation.  I'm looking forward to watching the rest of the movie at my first opportunity.  Check it out if you get the chance.  The standard edition, which I've seen quite a few times, gets 4 stars from me.
Posted by Eric Freed at 10:31 PM