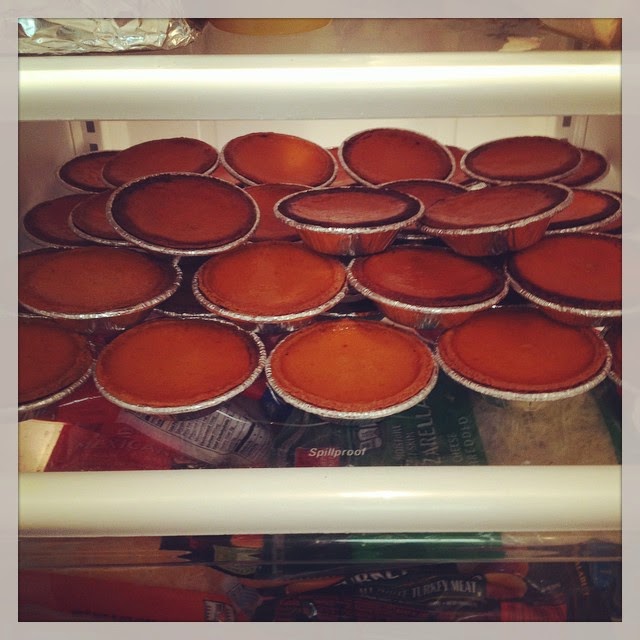 It's beginning to look a lot like Thanksgiving!  You're looking at 35 mini pumpkin pies, made using the classic Freed Family recipe, that was passed to me by my father by an oath of secrecy.  The majority are going to my employees at work.  My daughter and I will keep a few for ourselves.

We had a very nice dinner last night at New York J & P Restaurant in Fulton/Scaggsville.  It's surprisingly big inside, and they even had live entertainment (a singer-guitar player).  The place needs a little work, however.  I couldn't help but notice how many of the light fixtures over the tables had missing bulbs, or mix-and-match bulbs of different styles, or burnt out or missing bulbs.  They also seemed to be understaffed for the size of the place.  The few people working, who seemed to be family, were rushing around and constantly apologizing to us for any delays.  The food is good.  I had Shrimp Marinara and Spaghetti, which was very tasty (can someone please explain why shrimp are always served with the tails on?).  Melody had a small cheese pizza.  I tried one slice, and it was very good.  It's New York style, which means a very thin crust, though I was disappointed that the sauce was rather bitter-tasting.  I'm used to a sweeter sauce.  Our service was very good despite the supposed delays in getting the food out (there was a party on one side of the dining room).  With a little bit of TLC, this would be a really nice place.  We'll plan to go back.  The food was worth it, though I will try something different next time.

Pastor Mitchel gave another thought provoking message to us at our church service at Grace Community last night.  I was immediately convicted.  It was about how we've allowed technology to run rampant over our lives, to the point that we aren't living our lives in the way God surely wants us to live it.  I'm embarrassed to say that many of the things he commented on are things that I do, and they aren't good.  I sleep with my phone next to my bed every night, and it's the last thing I look at before sleeping, and the first thing when I awake.  I can't go an hour (or even 20 minutes!) without checking my phone to see if I got an email, or text, or Facebook update.  It's ridiculous.  And my daughter does the same thing.  It's not just our phones, either.  We do it with our laptops, as well.  And the TV is on almost continuously when we're at home.  Pastor Mitchel challenged us to make changes in our lives, and we began last night at dinner by leaving our phones in the car while we were in the restaurant (well...almost.  I put mine in my jacket pocket, but never got it out.).

I'm taking this thing seriously.  I'm not going to allow technology to rule my life, so I'm making some lifestyle changes, and my daughter will be, as well.  You'll likely see some changes here at this blog, too.  I'm cutting back on how often I post.  My philosophy, if you want to call it that, was always to post daily, but I also will do it as God inspires me.  Lately, I haven't been doing that.  I wanted so much to keep on a daily schedule that I was throwing just about anything in here.  Sometimes it was just a picture.  That will change, as I'm only going to post when I have something to say (as God inspires me).  That might mean only a few posts each week, or it might be daily, but it's not going to be every day for the sake of doing it every day.  I find it ironic that I did my Twitter thanks yesterday, where I sent a tweet to every one of my followers (who I follow back), given that Pastor Mitchel delivered this message on the same day.  It took several hours for me to do that, time I should have been spending with my daughter, or cleaning the house, or raking leaves.

The kind of TV I watch will be changing, too.  If the characters don't exhibit Christian values, why am I watching it?  Why watch something that falls outside of my own value system?  That means I'll be dropping any of the cop/lawyer shows involving killing or murder.  It means dropping sitcoms where the characters shack up with each other outside of a marriage relationship.  It means staying away from TV that pushes the bounds of taste.  And it means that the TV goes off if it is only on due to boredom.

Thank you, Mitchel, for issuing this challenge.  It made me look at how I use the technology in my life, and I'm taking charge of it by making serious changes.

I'll let you know how this goes.  It won't be easy, but I know we can do better.

Have a great Thanksgiving week, everyone!