Today I feel the need to talk about something that impacts many people in so many ways:  cheap paper towels.  There aren't too many things worse than a bad paper towel, and I've got some that could be some of the worst ever sold in stores.  I know what you're thinking:  Surely he's not going to blog about paper towels, right?  You betcha, I am.  And don't call me Shirley.

Brands such as Brawny, Bounty, and Scott's tend to lead the way with the best of the best, good, greatly absorbent and quality-made paper towels.  The problem with them is that they tend to be on the pricey side, and sometimes it's difficult to justify getting the more expensive paper towels when there are so many other brands that are so much cheaper (price-wise).  But the quality is so much cheaper to match the cheaper brands, as well, even if you do get lucky every once in a while.  For every Viva, there's a store brand that actually works pretty well.

I decided to buy a brand I had never heard of before, called "Fiora", since my local grocery-chain had them advertised for a very good price.  Heck, they even had the pick-a-size kind, which tends to be a key feature of the better brands.  Now, I tend to go with the less expensive brands, but I really haven't found one that I like.  That means I end up trying a different one almost every time I purchase them.  And unless you break open a package prior to leaving the store, you really don't know what you have until you get home.  It's a risky proposition.  But I bought the Fiora paper towels based on a lack of knowing anything about them, and I headed home. 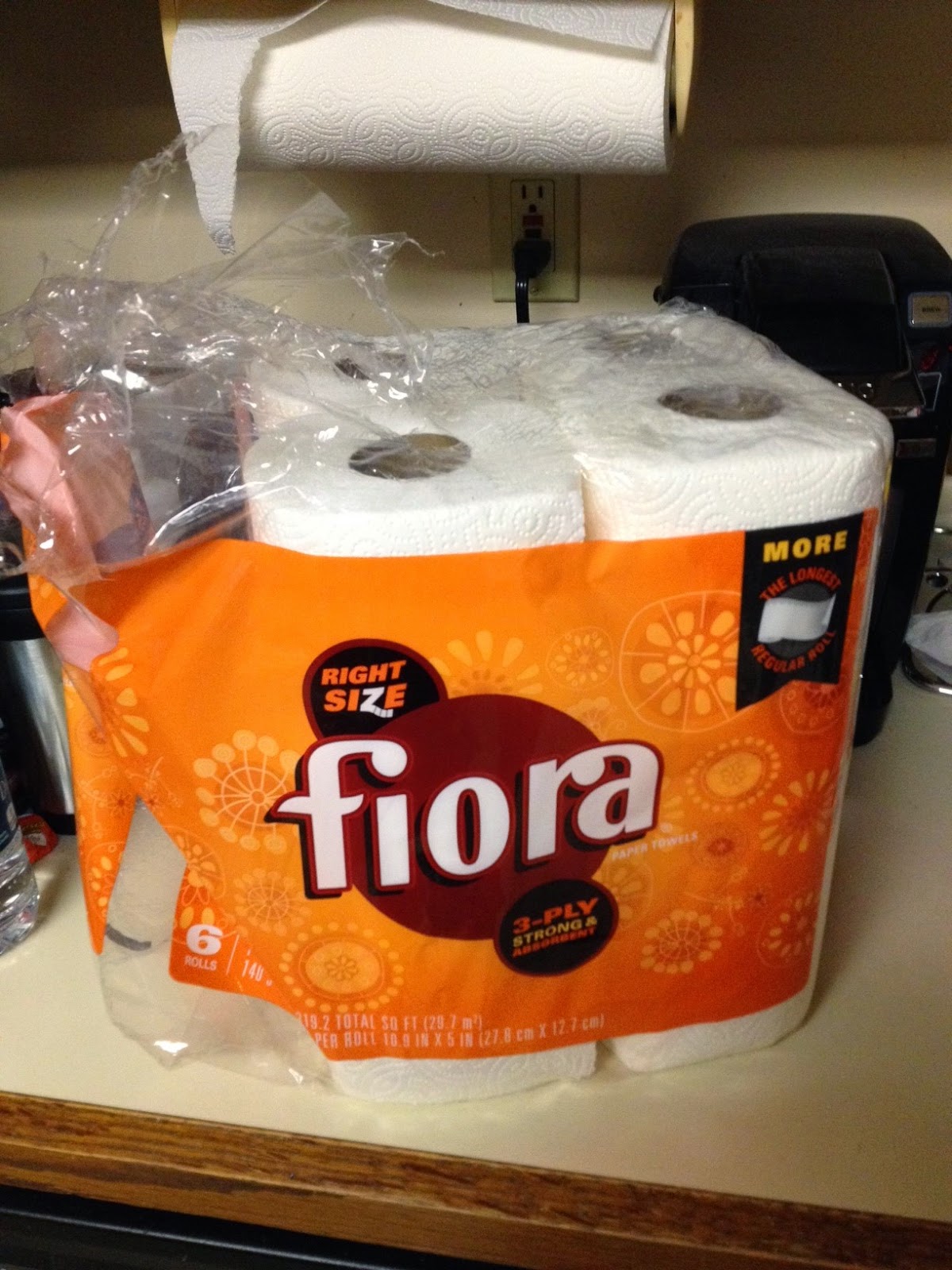 When I arrived at home and opened the package, I was immediately concerned.  The towels had that cheap feel to them.  Meaning they felt more like paper than towel.  Okay, a thin towel just wasn't going to cut it, but since I bought a pack of six rolls, I thought I may as well try them.  Faithful Pup Scout, after a long day at home, head left a wet spot on the kitchen floor for me to clean up, and this would be a good test for the Fiora's.  And they failed miserably.  They are absorbent, but all that means is that they completely disintegrated after taking on moisture.  It gets worse.  The perforation seems to be just a little too difficult to break the towel all along its edge, and it rips the towel about 7/8 of the way through consistently, leaving that last 1/8 of the towel hanging onto the roll (see the picture above).  It is maddeningly frustrating.

My daughter started to notice and complain, as well.  She almost never notices things like this, so it had to be bad for her to complain.  They are really terrible.

We don't seem to take shortcuts when it comes to toilet paper (thank goodness.... have you ever tried bad toilet paper?  If so, you know what I mean...), so I guess we shouldn't take shortcuts with paper towels.  It's really standing out for me this week due to my mother-in-law a few weeks ago buying me some great, high-quality Bounty paper towels (since the package had an NFL theme with a Steelers logo on the outside packaging, though nothing on the towels themselves).  I was really spoiled, and I guess that's why I'm so disappointed with the Fiora's.  Lesson learned.  Don't go cheap on paper towels.  Get the good stuff.

Have an extra-absorbent evening, everyone!